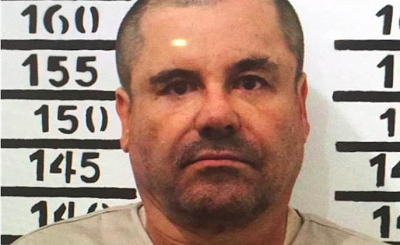 “Try to get me extradited as fast as possible,” Mexico’s most powerful drug lord Joaquin “El Chapo” Guzman recently asked his lawyer Jose Refugio Rodriguez. Guzman made his plea “in a moment of desperation” over his treatment in prison, the lawyer told AFP today.

Guzman is currently living under a much stricter regime, after he successfully escaped from the same prison last year. Authorities have taken extraordinary measures to prevent another prison break, installing metal rods in the floor and posting a guard wearing a camera on his helmet outside the cell. Guards also wake Guzman every four hours to make sure he is still alive and present.

It’s that last bit of treatment that is driving Guzman nuts. “He can no longer take this situation,” said his lawyer. El Chapo’s wife had also spoken out about her husband’s treatment behind bars and his declining health.

“Not allowing someone to sleep is an act of torture,” his lawyer said. “I saw a desperate man, a dejected man. I found him very discouraged and in a very serious state of health.”

Now, Guzman has decided to speed up his extradition to the United States where he faces charges ranging from drug trafficking to murder. But also, the drug lord apparently thinks, where he’ll get more sleep.

His lawyer said that it would take at least two months for Guzman to be extradited to America.

I guess he doesn't know how things are at our Super Max prisons. He might be put on what the call "No Contact" status. Meaning no phone,news,TV and No Visitors except Legal Reps. Then again maybe he realky is sleep deprived and forgot someone told him these things.