By David Amoruso - story updated as news comes in

Drug kingpin Joaquin “El Chapo” Guzman has been caught, Mexican President Pena Nieto announced on Twitter, see photo below. He wrote: "Mission accomplished: We got him."

Guzman was apprehended early this morning after a shootout between his bodyguards and the Mexican Navy. Acting on a tip the military raided a house in the city of Los Mochis where they encountered the fugitive kingpin. Five of El Chapo's men were killed in the shootout, while one marine was injured.

In response to the news, the DEA released the following statement:

"The capture of Joaquin “Chapo” Guzman-Loera is a victory for the rule of law and the Mexican people and government. The arrest is a significant achievement in our shared fight against transnational organized crime, violence, and drug trafficking. It is further evidence of our two countries’ resolve to ensure justice is served for families who have been plagued by Guzman-Loera’s ruthless acts of violence. The DEA and Mexico have a strong partnership and we will continue to support Mexico in its efforts to improve security for its citizens and continue to work together to respond to the evolving threats posed by transnational criminal organizations."

Last July, Guzman managed to break out of a maximum security prison by escaping through a freshly dug tunnel underneath his cell. He immediately became Mexico’s most wanted fugitive.

In October, authorities claimed they almost caught Guzman near his home base of Sinaloa, stating: “As a result of these actions, and to avoid his capture, in recent days, [El Chapo] engaged in a hasty retreat, which, according to the information received, caused him injuries to one leg and the face. It's important to clarify that these injuries were not a product of a direct clash.”

This time, El Chapo wasn’t so lucky. But before we begin to celebrate let’s see how long Mexican prison guards can keep him behind bars. 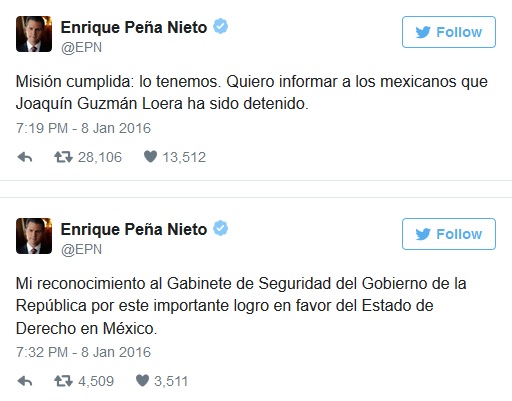