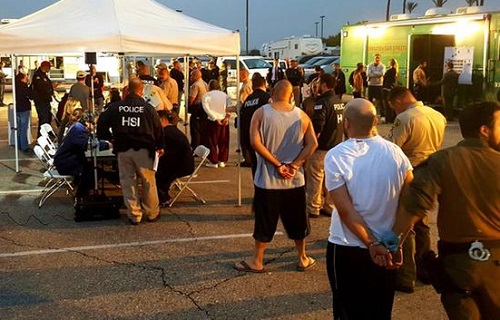 31 members and associates of a Santa Fe Springs-based street gang were arrested Tuesday on charges related to a wide-ranging criminal enterprise controlled by a member of the Mexican Mafia that allegedly is responsible for the murder of a rival gangster and the attempted murder of a Whittier Police officer.

The 35-count indictment specifically charges a conspiracy to distribute narcotics, which includes allegations of smuggling heroin into county jails, and a conspiracy to violate the federal Racketeer Influenced and Corrupt Organizations Act (RICO).  Eight counts of violent crimes in aid of racketeering (VICAR) are also charged.

The 147-page indictment names 51 defendants, including the so-called shot caller of the Canta Ranas street gang, which operates in Santa Fe Springs and Whittier. The indictment alleges that an incarcerated member of the Mexican Mafia prison gang exerts control over Canta Ranas and other gangs, and that he received compensation in the form of “rent” or “taxes” generated by drug trafficking and other offenses committed in gang territory.

The Mexican Mafia “carnal” identified in the indictment as D.G. (who was not charged as he is currently serving a life-without-parole sentence in Pelican Bay State Prison) allegedly issued instructions from prison that directed and authorized gangsters under his control to distribute narcotics, attack rivals and others who disobeyed directives, collect extortion payments from drug dealers and commit acts of violence.  The indictment specifically discusses criminal acts that date back to the spring of 2004, when members of the gang allegedly attempted to rob a group of high school students near a Santa Fe Springs park.

The lead defendant is Jose Loza, who recently became a full-fledged member of the Mexican Mafia and is the “shot caller” of the Canta Ranas gang.  In addition to implementing D.G.’s orders, Loza allegedly executed another member of the Mexican Mafia who wanted to expand his influence and challenge D.G.’s authority over street gangs in the San Gabriel Valley.  During the incident two months ago at a restaurant in the San Gabriel Valley community of Basset, the Mexican Mafia member was fatally shot, his bodyguard was severely wounded, and an innocent restaurant patron was shot six times in the abdomen.

The indictment also alleges that two defendants who were part of the Canta Ranas organization overseen by D.G. attempted to murder a detective with the Whittier Police Department when they shot at him in his unmarked vehicle while he was conducting undercover surveillance as part of a narcotics investigation.

During today’s law enforcement operation, approximately 400 agents and officers targeted members and associates of the Canta Ranas gang, which was formed in Santa Fe Springs around 1950.  The gang (Spanish for “Singing Frogs”), whose estimated 140 members reside primarily in Santa Fe Springs and Whittier, established a presence in other California communities, including Riverside, Sacramento and Stockton.

“This coordinated enforcement action illustrates how effective our law enforcement alliances are in attacking the crime afflicting our communities,” said DEA Los Angeles Special Agent in Charge John S. Comer. “These types of criminal organizations are comprised of the worst of the worst offenders who are trafficking drugs and committing acts of violence, putting citizens in serious danger.”

During the course of the three-year investigation, which was called Operation “Frog Legs,” authorities seized 51 firearms and made several narcotics seizures, including nearly one pound of methamphetamine seized during the execution of search warrants after Loza allegedly murdered the other Mexican Mafia member.

“We are grateful for the cooperation that took place throughout this investigation among local, state and federal law enforcement resources,” said Whittier Police Chief Jeff Piper. “This operation was a true example of law enforcement partners working tirelessly to make our communities safer.”

“This criminal organization may be less well-known than many of the Southland street gangs, but if the allegations in this case prove true, its members are no less ruthless or violent,” said Edward Owens, deputy special agent in charge for HSI Los Angeles. “Today’s actions not only took some of the most dangerous members of the Canta Ranas off the streets, but through our joint enforcement efforts we’ve made significant strides toward dismantling a criminal organization that has for too long believed it could operate with impunity in our communities.”

Among the 51 defendants charged in the indictment are:

Twenty-eight defendants were taken into custody today in the Los Angeles area, and they are expected to be arraigned on the charges in the indictment this afternoon in United States District Court in downtown Los Angeles.  Three other defendants were arrested today in Northern California and Arizona.  A dozen of the 51 RICO defendants – including Loza and Antolin – were already in state custody. They are expected to be turned over to federal authorities in the coming days.  Authorities continue to search for eight defendants who are named in the RICO indictment.

“Through the dedication and hard work of the Sheriff’s Homicide Bureau, detectives were able to arrest Jose Loza and Leonardo Antolin as the suspects responsible for the murder,” said Los Angeles County Sheriff's Homicide Captain Steve Katz. “Working collaboratively with the assistance of HIDTA Task Force investigators, Sheriff's Homicide Bureau detectives determined the murder to be connected with the activities of the Mexican Mafia Prison Gang.”

All of the defendants are charged in the RICO conspiracy, which carries a statutory maximum penalty of 20 years in federal prison.  The VICAR charges carry varying penalties, but the two defendants charged with murder could potentially face the death penalty.  The narcotics charges all carry mandatory minimum sentences of either five or 10 years in prison.

“As this indictment charges, the Canta Ranas gang is a root cause of violence and drugs in multiple communities here in Southern California,” said United States Attorney Eileen M. Decker. “The RICO statutes are designed to target criminal enterprises like Canta Ranas, and RICO prosecutions like this one, which target the top leaders of the gang, help make whole communities safer.”