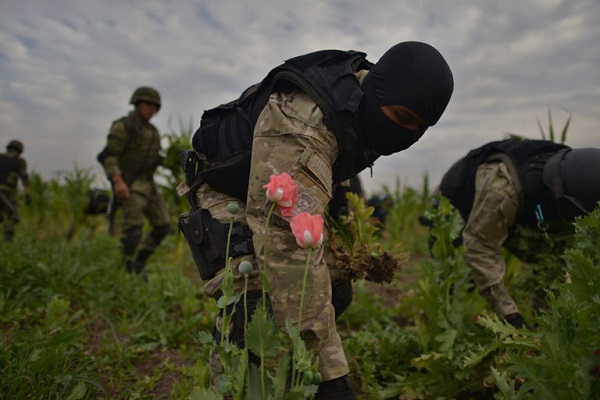 The price of getting high is not just steep, it’s a bloody massacre. One that The Mob Museum in Las Vegas is currently displaying in a temporary photo exhibit which shows the drug cartel violence in Mexico as well as the efforts by brave security forces and citizens to fight back.

“This exhibit is a reflection of our museum’s increasing attention to contemporary organized crime in all its forms,” said Geoff Schumacher, senior director of content at the museum. “Even as we tell the stories of how aggressive law enforcement brought down many traditional crime syndicates, we must document what organized crime looks and acts like in the 21st century. It is global in scope and just as nefarious as ever.”

The exhibit is on display from October 7 until December 17 and represents a small sampling of the work of Fernando Brito and Ioan Grillo, two Mexico-based journalists. Being a reporter always attracts dangers, but nowhere are they as severe as in Mexico where over 100 journalists have been murdered since 2000.

Fernando Brito, from Culiacan, Sinaloa, is an award-winning photojournalist who has documented drug cartel violence for newspapers and photo exhibitions since 2004. Ioan Grillo, a native of England, is a freelance journalist based in Mexico City. He is the author of Gangster Warlords: Drug Dollars, Killing Fields and the New Politics of Latin America (2016) and El Narco: Inside Mexico’s Criminal Insurgency (2011).

Mexico has undergone major suffering as it is now a frontline in the war on drugs. Drug cartels are waging a vicious war for territory and trafficking routes into the United States, the most profitable narcotics market in the world, where billions of dollars’ worth of cocaine, heroin, marijuana and crystal meth end up each year. Besides drugs, cartels have diversified their operations and gotten into human smuggling, kidnapping, extortion, and siphoning oil from pipelines.

The Mexican government has waged a military offensive against the cartels, arresting or killing many drug lords in the process. But the violence has only gotten worse. Between 2007 and 2016, there were more than 176,000 murders in Mexico, according to police counts. 2017 is so far the most homicidal year since current counting methods began two decades ago. Government records also show that more than 30,000 people have disappeared across Mexico.

As a result of the lack of authority and rabid corruption, many citizens have taken up arms themselves, forming vigilante groups. The documentary Cartel Land (below) shows the rise and downfall of such a group.