Mobster shot to death at restaurant in Montreal 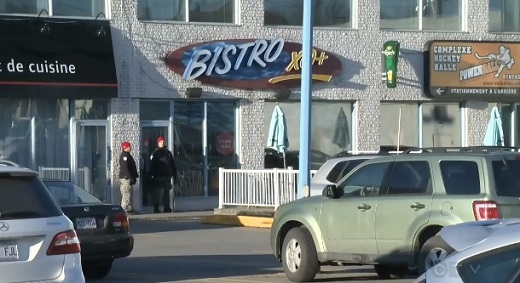 Mobster Tonino Callocchia was shot to death yesterday as he dined at a restaurant in Riviere-des-Prairies, Montreal. He was 53. His murder is the latest to rock the Canadian city as two mafia factions are fighting a vicious war for control of the rackets.

The longtime mobster was enjoying a meal at Bistro XO+ (photo above) around 1:30 p.m. on Monday when, according to police, “one or several suspects went inside and fired shots at the victim inside the bistro. The victim was pronounced dead on the scene by the doctor.”

The assassins, or assassin, wore ski masks to hide their faces, and hit Callocchia while surrounded by patrons and employees. After they shot their target down they fled the restaurant. Another job done, another name scratched off the list.

Callocchia had been the target of an assassination before. On February 1, 2013, he was hit in the torso by several bullets. He survived to live a bit longer, until yesterday to be precise. He’d had a long career in organized crime.

According to the Montreal Gazette, “His known ties to the Mafia date to the 1980s. In 1994, he was charged, and later convicted, in a money laundering case that linked him to Vincenzo “Jimmy” Di Maulo, the brother of Joseph Di Maulo, an influential Mafia boss who was killed, at age 70, in front of his home in Blainville on Nov. 4, 2012. That was a slaying police sources have theorized was a response to the many attacks on the Rizzuto organization in the years preceding it.”

Money and power. That is what it all comes down to. Vito Rizzuto had it. When his crew seemed weak, others tried to take it from him. Di Maulo was one of the men rumored to have taken on “King” Rizzuto’s crew. And for a while the attack on the Rizzutos seemed successful. Patriarch Nick Rizzuto was murdered. Vito’s son was killed as well. The rival faction was on a roll.

Until the King came back home. After serving a prison sentence for his role in the murder of three Bonanno crime family capos, Rizzuto (right) was back in Montreal. He’d had a lot of time to think while behind bars and when he got out he went straight to work.

One by one his enemies started falling. They were no match for the charismatic boss with connections around the globe and billions in the bank. As Omar said in The Wire, “You come at the King, you best not miss.” The men who had taken on the Rizzutos were beginning to learn that lesson the hard way.

For those that thought the killing would end with the death - by natural causes - of Montreal mob boss Vito Rizzuto this hit serves as a reminder that the mafia is not one person. It is an entity with many heads, each with a long memory. After Rizzuto’s death of natural causes, his friends continued his crusade against traitors and enemies, among them Callocchia, who sided with the rebel faction.

There is no rest for the wicked.