Montreal Mafia boss Arcadi to be released from prison soon 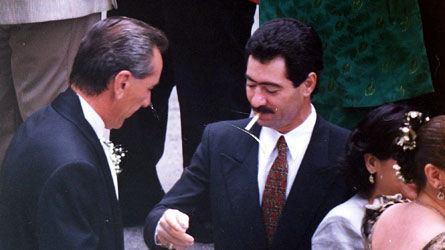 Francesco Arcadi, one of Montreal’s leading Mafia figures, will do the remainder of his prison time at a halfway house until his sentence expires in 2019, the Montreal Gazette reports. 62-year-old Arcadi (pictured above on the right with Vito Rizzuto on the left) was part of a committee that ran the Rizzuto crime family after boss Vito Rizzuto was arrested in 2003 and functioned as the organization’s street boss.

He only enjoyed his newfound power for a short time, as he himself was busted during an RCMP operation called Project Colisée in 2006. Along with Arcadi, authorities arrested Vito’s father, Nicolo Rizzuto, Paolo Renda, and Rocco Sollecito. They were charged with drug trafficking, criminal organization offence, bookmaking, possession of prohibited firearms, commission of offence for organized crime, extortion and attempted murders.

In 2008, Arcadi pleaded guilty to drug charges and several other crimes and was sentenced to 11 years behind bars.

While Arcadi did his time in prison, several of his codefendants and fellow committee members didn’t fare so well. Nicolo Rizzuto was murdered in 2010, Renda disappeared the same year - either dead or a fugitive. Two other members - Francesco Del Balso and Lorenzo Giordano – recently finished serving their prison bids.

For some time, there were rumors that Rocco Sollecito had become the new head of the Montreal Mafia. In November of last year, his son Stefano was arrested and charged with running a drug syndicate with fellow mob son Leonardo Rizzuto and Hells Angels bikers.

Despite all the violence, murders, and shifts in power, Arcadi kept quiet. Only three more years and he is free to roam the streets again. Whether or not that’s a good thing is up for discussion. According to Arcadi, however, there is nothing to worry about. He wanted retire, he told the parole board, and “manage a garden, raise animals and spend the rest of [his] time with [his] family.”