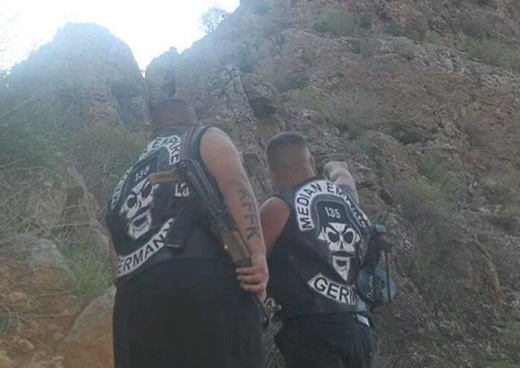 Several members of German biker club Median Empire are fighting terrorist organization ISIS in Syria. Among them is the club’s vice president. The news comes just a week after Dutch motor club No Surrender reported that three of its members were fighting ISIS in Iraq.

Where Western nations remain hesitant to put so-called “boots on the ground” these outlaw bikers are getting down and dirty with the locals helping them to push back the army of ISIS.

In one of the photos posted by the club on its Facebook page, two bikers can be seen wearing their club colors in, what they claim to be, Kobane, Syria. The town has been the scene of intense fighting between Kurdish and Free Syrian Army fighters and members of ISIS who laid siege to the region midway through September. The United States and its allies are currently helping combat ISIS’ march with bombing campaigns.

Now, the fighters in Kobane are getting help from German outlaw bikers as well.

Most of Median Empire MC’s members are of Kurdish descent, so it is no wonder they feel very strongly about this conflict and want to help out. The club was founded in Cologne in November of 2011 by Kurdish members who decided to leave the German chapter of Mongols MC.

Median Empire MC and No Surrender MC are both very young clubs with little history in the European biker scene. Both clubs now enjoy tremendous exposure with media in their home countries and as far away as Australia and the United States reporting about their acts in the Middle East.

Though some of its members are now fighting far away from home, authorities back home must be worried what will happen when these battle hardened warriors return to the streets. With tensions among biker groups already at a high, it won’t take much to set things off. Especially after you’ve just spent months killing vicious terrorists looking to cut your head clean off.