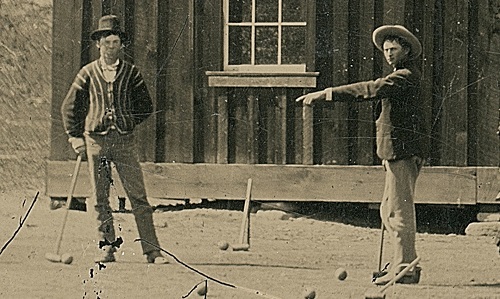 He was known – and feared – as Billy the Kid, a violent gunman and outlaw who earned infamy in America’s Wild West. He died in a gunfight at age 21. His death was synonymous for how he lived: Fast and violent. For over a century there was only one photo of him. It sold for $2,3 million in 2011. Now, a second photo has been unearthed in Fresno, California. The owner bought it at a junk shop for just $2.

The photo (above) depicts Billy the Kid, left, playing croquet along with several members of the Regulators, as well as friends and family. It was taken after a wedding in the summer of 1878, just a month after the gang took part in the brutal Lincoln County war.

The San Francisco-based Americana company, Kagin’s, authenticated the photo, which then immediately rose in value from $2 to an estimate several million dollars. The only other confirmed photo is from 1880, two years younger.

If you want to read more about the photo, its history, and how it was authenticated, then check out this article at The Guardian.