Nephews of Venezuela’s first lady each get 18 years in prison for plan to import 800 kilos of cocaine into the U.S. 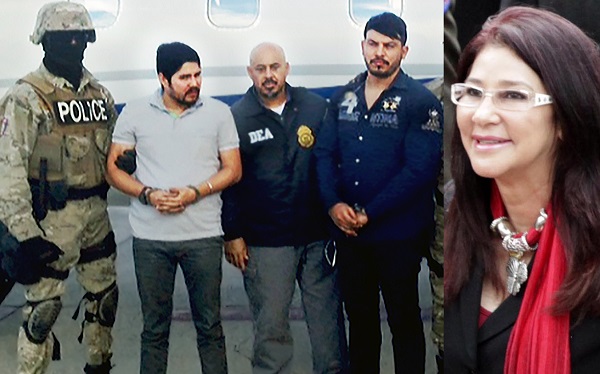 The nephews of Venezuela’s first lady were each sentenced to 18 years in prison on Friday for conspiring to import over 800 kilograms of cocaine into the United States. Efrain Antonio Campo Flores and Franqui Francisco Flores de Freitas were convicted by a jury in November 2016, following a two-week trial. They aren’t the first highly placed drug traffickers in the region to fall and won’t be the last.

The two men come from a powerful and rich family. Their aunt, Cilia Flores, is the first lady of Venezuela, and seeing how its President, Nicolás Maduro, has turned the country into an effective dictatorship, that means 31-year-old Campo Flores and 33-year-old Flores de Freitas pretty much had a license to get away with everything.

So why not become narcos? Drug kingpins. Players in a violent underworld where untold billions could be made. Hell, it wouldn’t just be for them, they told associates, part of the drug money would be used to fund their aunt’s December 2015 campaign for a position in the Venezuelan National Assembly. So, everybody wins!

It’s not like using a cocaine deal to finance a political campaign is wrong, right? In a country where corruption is simply part of doing business how were they supposed to even know something like that?

Besides, due to sanctions placed on Maduro and other current and former senior Venezuelan officials by the U.S. Department of the Treasury because they are accused of undermining democracy in their country, the pair had little choice but to be creative to get paid.

They had engaged in a scheme to solicit bribes from debtors of Venezuela’s state-run oil and natural gas company, Petróleos de Venezuela S.A. (PDVSA), in exchange for promises that a cousin, Carlos Erik Malpica-Flores, would cause PDVSA to approve and make payments on certain debts.

But it wasn’t getting them the big money. For that, they turned abroad. Beginning in August 2015, Campo Flores and Flores De Freitas worked with others in Venezuela, Mexico, Honduras – including at least one member of Fuerzas Armadas Revolucionarias de Colombia (FARC), a designated foreign terrorist organization – in an effort to dispatch large loads of cocaine via private aircraft from premises controlled by Venezuelan President Nicolás Maduro at Simón Bolívar International Airport in Maiquetia, Venezuela.

They figured 800 kilograms of coke would earn them a royal payout. Little did they realize the DEA had been following them along the way using one of their longtime informants. They were arrested in Haiti where they traveled on diplomatic passports.

“At their trial last November, a unanimous jury saw their plot for what it was – a massive drug distribution conspiracy,” Acting Manhattan U.S. Attorney Joon H. Kim told the media. “With [their] sentencing, for participating in this brazen cocaine trafficking scheme, they will spend many years in an American prison.”

“The sentencing of Campo Flores and Flores de Freitas serves as a strong reminder that anyone choosing to traffic drugs will be relentlessly pursued by the DEA and prosecuted for their involvement in such activities,” added DEA Special Operations Division Special Agent-in-Charge Raymond Donovan.

Indeed, they will. In Suriname, the country neighboring Venezuela, the DEA busted both that nation’s President Desi Bouterse’s son Dino and his right-hand man Edmund Muntslag for trafficking narcotics into the United States. Dino Bouterse is currently serving a 16-year prison sentence in an American cell.

Not that the arrests surprised anyone, though. President Desi Bouterse himself was convicted in absentia of drug trafficking in the Netherlands where he is still a wanted criminal. And at the beginning of 2016, he appointed a convicted drug trafficker as the head of Suriname's national security service.

And that’s just two governments in Middle and South America that have been corrupted by the riches that the global drug market has to offer. There are countless others, but there’s only so much time in a day.

Why is it that people who already have more money than a third world country decide that all their money is just not enough for them?

The answer is simple.Pure unadulterated GREED.They have more money than 90% of the population combined and it's still not enough for those evil greedy bastards.

Exactly! Glad they took these guys down. And I hope a lot will follow. We still got a lot of bankers in need of a nice jail cell.