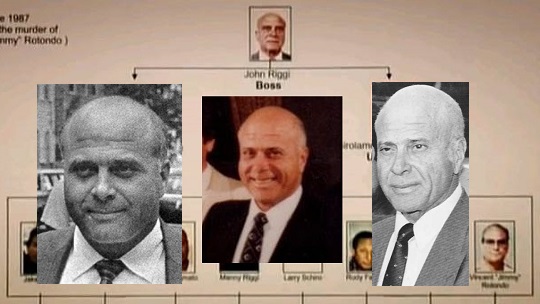 His obituary reads, “John M. Riggi, Laborers Local 394 business agent, Army Air Corps veteran, dedicated his life to his family.” Though the obit refers to his blood relatives, it just as well could’ve referred to his other family, New Jersey’s DeCavalcante crime family. Riggi (right) was born in Elizabeth in 1925. He graduated from Linden High School in 1942 as class president and a three letter athlete after which he enlisted in the United States Army in 1943, where he was a staff sergeant in the Air Corps. He served as an airplane and engine mechanic for the campaigns in Normandy, Northern France, Ardennes, Rhineland, and Central Europe.

After coming home, the war veteran became involved with the New Jersey mob run by Simone “Sam the Plumber” DeCavalcante. The two men became close and within two decades of joining Riggi was a man of power and influence. He became a business agent of the International Laborers Local 394 of Elizabeth, New Jersey, in 1963. In this role he was able to manipulate and extort the construction industry in the region. A typical mob racket. He would remain a business agent for the union until he was charged with labor racketeering in 1988 and was forced to step down.

By the early 1970s, Riggi had become the crime family’s leader, taking over from DeCavalcante. Riggi was a popular boss, well-liked by his men. A former New Jersey mobster who knew Riggi said, “He was an old school gentleman.” Riggi formed a close friendship with New York mob boss John Gotti, which he hoped would benefit his family as it was surrounded by the New York families and the Bruno family in Philadelphia. With support from the powerful Gambinos he hoped to keep the others in check.

That is why when Gotti asked Riggi to do him a favor, Riggi obliged. Like the time Gotti wanted Staten Island businessman Frederick Weiss dead. Riggi helped plan the hit, which took place on September 11, 1989. DeCavalcante soldier Vincent Palermo was the triggerman and later testified, “I shot him twice in the head. Being I shot Weiss, they made me a captain.”

Testifying via televised broadcast from a federal prison hospital in Butner, North Carolina, Riggi said the following about the hit on Weiss: “We agreed he should be murdered. Pursuant to the agreement, he was murdered.”

By the time of the above testimony, in 2003, many of Riggi’s underlings had turned government witness. Riggi had missed most of that after spending his days in a cell after having been convicted of labor racketeering in 1990. Authorities claimed he still ran the family from prison, but as his health deteriorated and more and more mobsters flipped it is doubtful he was able to exert any control over what happened on the streets of New Jersey.

John must have been involved with DeCavalcante in the 1952 fix of the NJ gubernatorial election.  The mob's choice for governor was Paul Troast, the NJ Turnpike commissioner.  The Turnpike was built under cost and finished under contract estimates for time, thanks to Riggi's union connections.  A quid pro quo, Troast would "look the other way" regarding gambling in 45 shore towns, set up by my Dad.  It's all detailed in my memoir, "The Secret Casino at Red Men's Hall."  Let me know if you'd like a review copy.  Sam Valenza, Jr.I have a new email: sam@professorgoogle, com