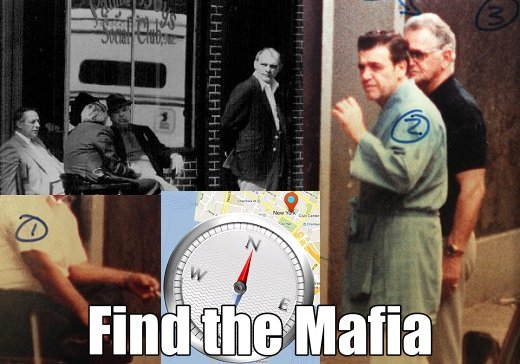 Since its inception members of the American Mafia hung out at social clubs owned by friends or associates. Places with names like The Ravenite, The Triangle Social Club or The Gemini Lounge. Mob buff Charlie Yates has compiled an app and map listing almost every known mob social club in the New York area. “Modern technology can actually put you in front of places you've only read about in books.”

Mob social clubs have been around for as long as wiseguys wanted to get together to shoot the shit without cops looking over their shoulders. Here they could relax, have a drink, plan a crime or -if the opportunity presented itself- shoot a friend of theirs in the head.

But with the mob’s decline, the social clubs are beginning to disappear. Even those spots once used as base of operations by powerful bosses like John Gotti and Vincent Gigante have been shut down and remodeled into trendy shops where nothing reminds one of the location’s shady history.

To help us find these almost forgotten historic places mob researcher Charlie Yates has tracked down many of the mob social clubs in New York and listed them on Google Maps in his Ultimate New York Mob Social Clubs and Hangout Map. “I really got started with my research because I have never been to New York City,” Yates tells Gangsters Inc. “Google Maps and Street view were a godsend. The advancement of technology can actually put you in front of places you've only read about in books.”

Living in Mississippi may have prevented Yates from physically visiting the places he has researched, it did nothing to hinder his quest for information about the Mafia. “When I was 10 years old I saw the movie Goodfellas for the first time and that was it. I've been hooked on organized crime since that day 24 years ago. I went out and bought every book I could find on the mob starting with Murder Machine by Jerry Capeci.”

After going through his books in record time Yates moved on to FBI files, articles, he even got a paid subscription to the New York Times just so he can access its archive to find old news articles about the Mafia. But above all there were some people and places he really wants to thank. “I would especially like to thank Angela Clemente. Without her help on the Greg Scarpa files there would be many places on the map that I never would have been able to locate. The Mary Ferrell site was also a tremendous help. Also the archives of the Real Deal Forum and Gangsters Inc. were a treasure trove of great locations of former, and some current, mob hangouts.”

Besides the now-released Ultimate New York Mob Social Clubs and Hangout Map on Google, Yates has compiled all of his information into a soon-to-be-released mobile phone app called the Ultimate Mob Hangout. Yates: “It will feature ten times as many historical and genuine mob hangouts from around the United States. The app won't be stuffed with the personal homes of mobsters that other apps use as useless filler information. To me, homes are a personal thing. It's were these guys’ families grew up so I could never cross that line. Families are off limits and honestly, half these guys gave false addresses that went into the papers anyways. I've focused mainly on social clubs, bars, party clubs, etc.”

Yates’ cause is plain and simple. “The Social Club Map will allow others to get a glimpse into the history and hangouts of Cosa Nostra in all the five boroughs of New York City,” he says proudly.

“Hopefully,” he adds, “One day I will be in a position to visit the Big Apple and see the sites in the flesh myself.”

Charlies Yates could still use some help from our readers.

“There are a few finishing touches I have to put on the app before I release it. For example, I know Dick Fusco had a social club at 65th street and 11th avenue. I don't have the address so I left it out of the map. I know Patty “from the Bronx” DeFillippo had a Bronx club called the Aquarius Social Club on Waterbury Avenue, I don't have an exact address.”

I can't believe people actually give 3 fucks about this. Wayyy to much time on there hands.

Hey, Angelo Bruno, you wrote about 10 shit books on the mob that no one read, so drop the bullshit criticism, a d stop being jealous. If no one gives a fuck, why did you write a book  a month on mob, and come here to see this chart?

You sure got the wrong Angelo bro. I couldn't write a book if my life depended on it. Shit, I even type with one finger.

Not all the areas. We go out of N.Y.C. for some social clubs. And those aren't the same five families. Enough with the bullshit PERIOD.  As the N.Y.C. five you can get them from other sites. Bunch of flipped, dead on the list, plus old fucks who have no say. John Gotti Jr. was able to quit. WTF. F.B.I. or L.E.O.'s would only label Francesco " Frank" Cali" boss of Gambino's and not arrest. Which their are no Gambino's or Genovese anymore as those names are obsolete for the N.Y.C. 5 crime families. 2011 changed everything you got that?