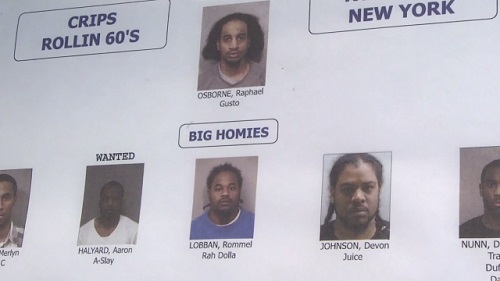 At trial, the government successfully proved that 30-year-old Osborne led the Roosevelt, NY-based Rollin’ 60s Crips, a racketeering enterprise that engaged in multiple crimes of violence and narcotics trafficking. Between 2003 and 2013, members of the gang followed an “on sight” rule established by Osborne that commanded gang members to attack rival Bloods in Roosevelt whenever possible and by whatever means available. In addition, numerous other shootings and murders were committed at Osborne’s direction. 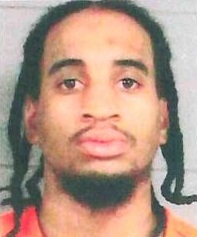 Prosecutors elicited details of 15 shootings and three homicides that were committed by members of the Rollin’ 60s during Osborne’s reign and established that the gang financed its activities through firearms and narcotics trafficking. Over the course of the conspiracy, the gang was responsible for bringing hundreds of illegal firearms to Long Island, including revolvers, semi-automatic handguns, assault rifles, and submachine guns.

Among other crimes, Osborne (right) was convicted of:

Conspiring to murder and attempted murder of a federal informant in October 2012.  Beginning in the spring of 2012, law enforcement, with the aid of a Rollin’ 60s gang member informant, began purchasing firearms from the gang, including some from Osborne’s residence on Debevoise Avenue in Roosevelt.  After the informant attempted to purchase a firearm from Osborne in June 2012, Osborne became suspicious and ordered other gang members to kill him.  On October 13, 2012, a gang member lured the informant from his Hempstead home to a location where a fellow gang member was waiting.  The informant was shot five times at close range, leaving him paralyzed.

The January 2013 attempted murder and assault of a rival Bloods gang member.  On January 30, 2013, Osborne and other ranking members of the Rollin’ 60s followed a vehicle occupied by several Bloods gang members to a house on Pleasant Avenue in Roosevelt.  As the rivals’ vehicle turned into the driveway of the residence, Osborne and other gang members unleashed a barrage of .40 and .45 caliber bullets that ripped through the vehicle and sent one of the Bloods members to the hospital with a gunshot wound to his abdomen.

Two robberies that he committed with other members of the gang in the fall of 2010.  The first robbery involved a gang member stealing marijuana and cash from the victim, while Osborne dragged the victim from his vehicle and pistol whipped him in the street.  In the second robbery, Osborne directed gang members to the home of a drug dealer who was robbed at gunpoint.

Conspiring to distribute 280 grams of crack cocaine, 100 grams of heroin, 100 kilograms of marijuana, and quantities of methylone, commonly known as “molly.”

“The crimes that Osborne stands convicted of underscore the wanton violence the Crips street gang unleashed on neighborhoods of Long Island,” stated United States Attorney Capers.  “Street gangs such as the Crips infect communities, and we will continue to respond to the Crips’ brutal violence with unwavering investigation and prosecution – they will be brought to justice and prosecuted to the fullest extent of the law.”  Mr. Capers extended his grateful appreciation to each of the law enforcement agencies for their assistance in this case, in particular the Special Investigations Squad of the Nassau County Police Department and the FBI’s Long Island Gang Task Force.

Assistant Director-in-Charge Rodriguez stated, “The verdict against Raphael Osborne leaves the area of Roosevelt a little safer today.  During his time as a Crips leader, Osborne directed attacks against rival gangs in the Roosevelt area by any means available.  The FBI will continue to work with our law enforcement partners to dismantle gangs and the violence they bring to our communities.”

District Attorney Singas stated, “This defendant and his fellow gang members brought illegal guns, deadly drugs, and unbridled violence into communities on Long Island.  He oversaw a ruthless enterprise that trafficked in assault weapons, handguns, cocaine, and heroin, and left many victims in its wake.  I thank all of our partners who took part in the dangerous and important work to arrest and prosecute this defendant and his associates.”

Acting NCPD Police Commissioner Krumpter stated, “Crime has no boundaries and this case is an example of how partners in law enforcement utilized talented personnel and resources to bring this defendant to justice.  Today’s arrest should serve as a deterrent to criminals as we at the Nassau County Police Department are committed to working with our fellow law enforcement partners to ensure public safety.”

Osborne is the fourteenth member of the gang to be convicted since the inception of this case.  Three other members of the gang are pending trial.