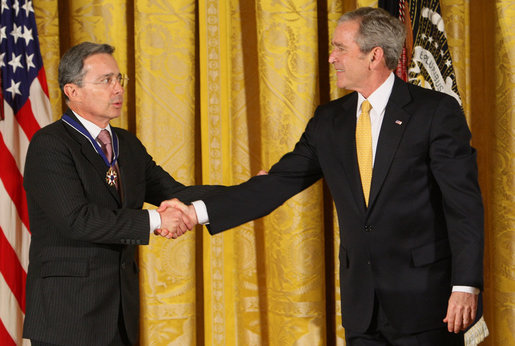 The ghost of Pablo Escobar continues to haunt his former associates. In newly declassified cables from the State Department, Álvaro Uribe, former Colombian president and one of the nation’s most powerful political figures, was frequently accused of having close ties to drug lords such as Pablo Escobar and the Ochoa brothers.

The cables, researched by The New York Times, describe meetings from 1992 to 1995 between American officials and Uribe “when he was an up-and-coming politician, as well as information gathered from Colombian officials who knew him well.” Uribe (pictured above with then- U.S. President George W. Bush) would serve as president from 2002 to 2010.

A cable from July 1993 stated: “Senator Uribe has proved an enigma to the embassy — his family ties to narcos (he is a cousin to the Ochoas) plus rumors from credible contacts taint him, but past declarations against the traffickers and vehement protestations to the embassy, say otherwise.”

Another cable, from March 1995, refers to information diplomats received around 1992 about an attempt by Uribe to nominate “a person associated with a known narcotics trafficking family” as his party’s candidate for mayor of Medellín.

Unsuccessful in his attempt, he then tried to nominate an uncle of Pablo Escobar. This attempt was also unsuccessful. They did succeed in painting Colombia’s future president as a man with a dark side. A side with close connections to his country’s most violent criminals.

Read the whole article on The New York Times website.