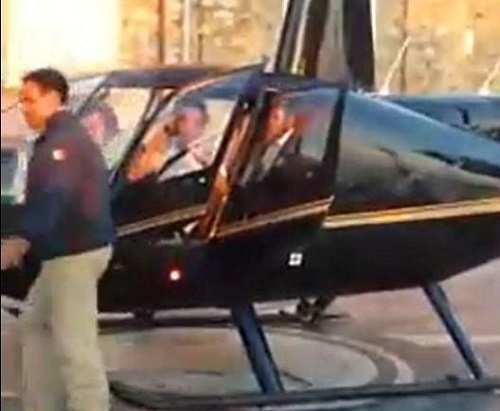 It was magical! When a soon-to-be bride and groom flew in by helicopter to their wedding in the Calabrian village of Nicotera, they could see their friends and family below. Everyone had gathered in the town square, which had been cordoned off for three hours prior to their arrival. The pair’s helicopter landed in the center of the square, and everyone’s attention, commencing the wedding ceremony. Magical indeed, but, Antimafia police in the Calabrian city of Catanzaro asked, why was this helicopter authorized to land in a town square for a simple wedding?

According to Italian news agency ANSA, prosecutors Nicola Gratteri and Giovanni Bombardieri are currently looking into the matter, going through the list of attendees to check for any prominent names, such as members of the municipal government or the local Mafia clan.

They are doing so, because authorities believe this to be an example of corruption and want to see whether the bride or groom has any links to organized crime, namely the Mancuso clan of the ‘Ndrangheta, which rules the area.

The Mancuso clan has a fierce reputation for violence and is known for its prolific involvement in international drug trafficking. Its leader Pantaleone Mancuso was released from prison last year after he had been arrested in South America and extradited back to Italy where prosecutors demand Mancuso to be sentenced to 16 years in prison for an attempted mob murder.

The Mancuso clan’s power extends well into regional politics. ANSA reports that, “two local municipal administrations of Nicotera have been dissolved for mafia infiltration - in 2005 and 2010.” And the current administration is under investigation as well.

This spectacular dream wedding will no doubt add some more heat, as more and more eyes scrutinize every decision the mayor, his municipal government, and his civil servants have made.