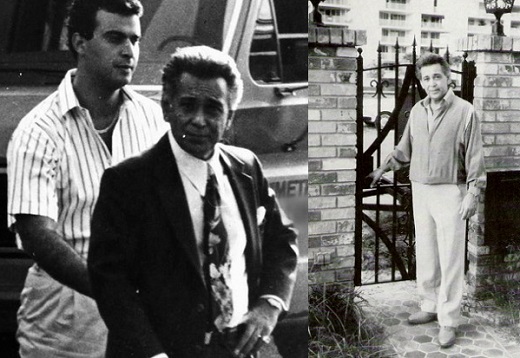 Infamous Philadelphia mob boss Nicodemo Scarfo passed away in prison on Friday, underworld sources told mob reporter George Anastasia, who broke the news yesterday. Scarfo was 87. He was serving a 55-year sentence for racketeering and murder and had been housed at a federal prison medical facility in Butner, North Carolina, for over a year now. Scarfo will go down as one of the most erratic and violent Mafia bosses in recent American crime history.

Originally from Brooklyn, New York, Scarfo’s family moved to New Jersey in the early 1940s. By the 1950s, Scarfo was working for his uncle Nicholas “Nicky Buck” Piccolo, a member of the Philadelphia crime family. Nicknamed “Little Nicky” for his diminutive size, Scarfo made up for his small stature with a hair-trigger temper and a lust for deadly violence.

This temper established his fearsome reputation within the Mafia but also got him in trouble with the law. In 1963, for instance, he stabbed a man to death at a restaurant over an argument that got out of hand. He pleaded guilty to manslaughter and was released from prison after less than a year.

He then went to Atlantic City to run the Philadelphia crime family’s interests there. Back then, the city was a cow town. Gambling had not yet arrived and Scarfo was scraping by with a small-time gambling and loansharking operation. Though he hated every day spent there, he endured, biding his time. By then, legalized gambling in Atlantic City was on the horizon, promising endless possibilities for an enterprising gangster such as Scarfo.

The 1970s was the decade that Scarfo’s fortunes changed. It started off with him spending quality time in Yardville Correctional Center with several powerful mobsters, including Angelo Bruno, leader of the Philadelphia mob. It was always good to be able to get close to those in power. Then, in 1976, New Jersey legalized casinos in Atlantic City and Scarfo’s good years had arrived.

All of a sudden, money was pouring into the city. Scarfo made sure all his businesses profited royally. He remained involved in gambling and loansharking, of course, but also held interests in bars and construction. His stature in the Philly mob was also on the rise, he was now their official man in a booming Atlantic City.

In 1980, after Angelo Bruno, Philadelphia’s “docile” and respected Mafia leader, was shot to death in front of his home, Scarfo rose even more. Bruno’s underboss, Philip Testa, succeeded him as boss and appointed Scarfo as his consigliere. But Bruno’s murder was just the starting shot in a bloody power struggle and Testa himself was murdered in March of 1981 when an explosive device went off at his house and blew the newly crowned mob kingpin to bits.

Shortly thereafter, an extremely angry Scarfo ascended to the throne, hungry for revenge. What followed next can only be described as bloody carnage. Scarfo went after anyone he felt had been involved in Testa’s murder. When he ran out of targets, he invented new ones and carried on with his reign of terror.

Under his leadership, the Philadelphia crime family began to fester and burn from within. Scarfo demanded loyalty, but would turn on his men in a second if they’d failed to show up to a meet or said something that he felt was out of line. He would become especially deadly if he deemed you a threat to his power.

He shocked his own loyal henchmen when he ordered the murder of Salvatore “Salvie” Testa, the son of Philip Testa and one of Scarfo’s most capable hitmen. The young Testa was considered a rising mob star with a bright future in the rackets. Scarfo feared Testa’s popularity and wanted him gone. His men did as they were told. In 1984, Testa’s best friend lured him to a Philadelphia candy store where he was shot to death.

The hit left a bad taste among Scarfo’s men. Paranoia increased as each feared for his life. While Scarfo felt he was running a tight ship, more and more of his once loyal soldiers began thinking about the unthinkable: They were opting to become a rat and join the Witness Protection Program where they would be safe from Scarfo’s violent orders.

As one after the other flipped and became a turncoat, prosecutors began collecting evidence and building cases. By the late 1980s, Scarfo was locked in a cell. With each court proceeding he was greeted by yet another former underling who had turned against him. The ultimate betrayal came when Philip “Crazy Phil” Leonetti, his own nephew and underboss, testified against him, providing prosecutors with the nail in Scarfo’s coffin as he was sentenced to 55 years behind bars for racketeering and several gangland murders.

From prison, Scarfo tried to maintain control over the Philadelphia underworld through his son Nicky Jr. However, unknown assassins put a stop to that in 1989 when they riddled Nick Jr.’s body with six bullets at a Philadelphia restaurant.

The mob son survived the hit attempt and – thanks to his father’s close friendship with Lucchese mob boss Vic Amuso - was later placed under protection of New York’s Lucchese crime family, where he became an official “made” member. He is currently serving a 30-year sentence for racketeering conspiracy.