NYPD cop, who moonlighted as bodyguard for El Chapo’s wife, had side gig trafficking cocaine 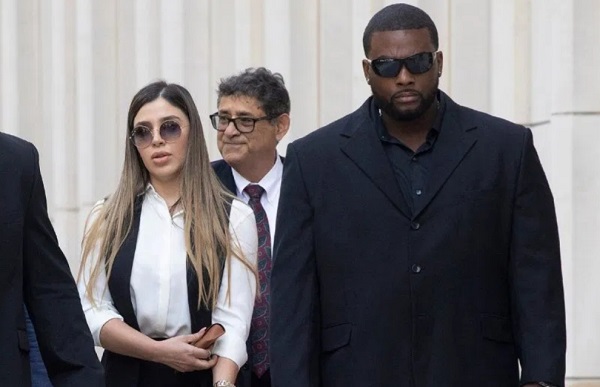 We often hear the phrase: “They don’t pay cops enough.” Some of these guys have to work extra jobs to make ends meet. One NYPD officer even worked as a security guard for the wife of infamous Mexican drug lord Joaquin “El Chapo” Guzman, during the kingpin’s trial. Maybe not the best job for an officer of the law.

That’s exactly what officers of the NYPD’s Internal Affairs Bureau thought when they saw 36-year-old Ishmael Bailey (photo above, far right with sun glasses), a 12-year veteran with the New York Police Department, escort narco wife Emma Coronel Aispuro (photo above) as she showed up at Brooklyn federal court to attend her husband’s drug trafficking trial this summer.

Something was off. Investigators began looking closer into Bailey’s affairs and found the security detail was just the least of a long list of shady side gigs he had going on while he was also a member of New York’s police force.

They decided to join in on the fun and at the end of last month sent in an undercover agent posing as a cocaine dealer. He asked Bailey if he could provide him with some security as his product moved through the city. On September 4, Bailey was shown a duffel bag filled with three packages he was told were three kilos of cocaine – in reality it was only one kilo as the other two packages were fake.

Pay that man his money

For his services, Bailey was paid $2,500 for that one run. He was handed $10K more to pick up two kilograms of cocaine at another location a week later. If he is found guilty, he will face up to 15 years in prison. While there, maybe he can provide security for an imprisoned drug lord? Although, seeing how cons tend to have an unfavorable opinion of cops, he might be better off just watching his own back. If only he could hire some officers of the NYPD to escort him around the yard. Lord knows, they could use the extra money.