The leader of an MS-13 clique in Columbus, Ohio, was sentenced to life in prison on Wednesday for conspiring to commit racketeering and murder in aid of racketeering. 34-year-old Martin Neftali “Momia” Aguilar-Rivera (photo below) accepted responsibility in July for participating in five murders.

“[Aguilar-Rivera’s] ties to MS-13 in the Southern District of Ohio stretch back to the mid-2000s,” U.S. Attorney Benjamin Glassman said. “From 2015 to the date of his arrest in August 2017, he was the unquestioned leader of the Columbus 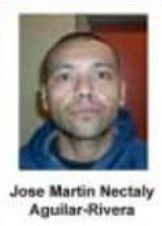 clique of MS-13. Under Aguilar-Rivera’s leadership, MS-13 members in Columbus became more organized, more violent, and more ruthless. He deserves to spend the rest of his life in prison.”

In February 2018, 23 individuals were charged in a second superseding indictment and alleged to be members and associates of MS-13 in Columbus. They were charged in a racketeering conspiracy, which included five murders as well as attempted murder, extortion, money laundering, drug trafficking, assault, obstruction of justice, witness intimidation, weapons offenses and immigration-related violations.

The second superseding indictment alleged that the defendants committed a host of overt acts in furtherance of the conspiracy, including:

The murders sometimes involved gang members using weapons like machetes, knives and hammers to attack and beat their victims to death. In two of the charged murders, the victims were stabbed and slashed with bladed weapons before being buried in a nearby park.