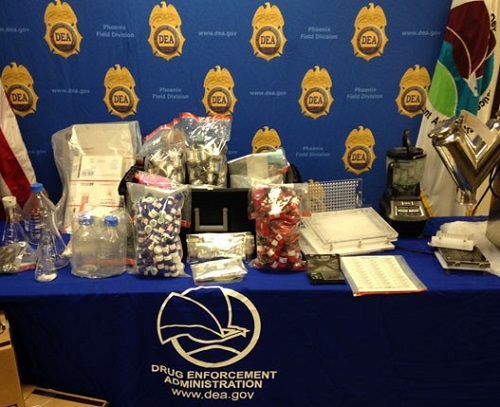 A nationwide sweep of raids and arrests targeting every level of the global underground trade of anabolic steroids took place today, DEA officials announced. Operation Cyber Juice was comprised of over 30 different U.S. investigations in 20 states and resulted in the arrest of over 90 individuals, the seizure of 16 underground steroid labs, approximately 134,000 steroid dosage units, 636 kilograms of raw steroid powder, 8,200 liters of raw steroid injectable liquid, and over $2 million in U.S. currency and assets.

Products often found in these underground steroid labs are commonly obtained via the internet from Chinese chemical manufacturing companies and underground labs which manufacture and traffic the vast majority of steroids and source ingredients found in the United States.

“There is great danger in buying steroids, chemicals, and other illicit products on the Internet,” the DEA states. “Many companies operating illegally both in the United States, China, and elsewhere have no regard for product safety and mislabeling is common – both intentional and unintentional.  Products are often misrepresented, and their safety is not at all guaranteed.  In addition, federal agents report that many of the underground steroid labs seized are extremely unsanitary, further illustrating the danger in buying these products illegally.  For example, recent lab seizures uncovered huge amounts of raw materials being mixed in bathtubs and bathroom sinks.”

Previous DEA steroid investigations such as Operation Raw Deal in 2007 focused on raw material manufacturers and suppliers in China and other countries; underground anabolic laboratories in North America; numerous U.S.-based websites distributing materials, or conversion kits, necessary to convert raw steroid powders into finished product; and Internet bodybuilding discussion boards that are the catalysts for individuals to learn how to illicitly discreetly purchase and use performance enhance drugs, including anabolic steroids.  Many of the underground steroids labs targeted in this case advertise and are endorsed on these message boards.