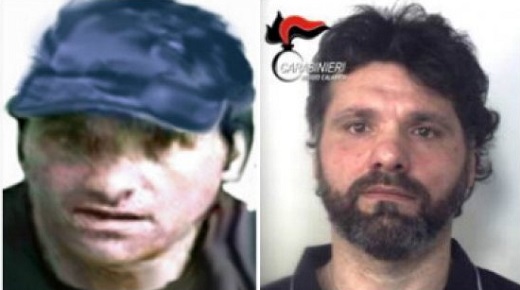 Another huge success for Italy’s anti-Mafia police today as they arrested ‘Ndrangheta boss Ernesto Fazzalari, the country’s second most wanted mob leader. Fazzalari (photos above, before and after arrest) was wanted since June of 1996 after he was sentenced to life in prison for a double homicide, drug trafficking, and Mafia crimes.

Members of the special police units Gruppo Intervento Speciale and the Squadrone Cacciatori Calabria raided 46-year-old Fazzalari's hideout in the middle of the night, surprising the 'Ndrangheta boss who thought he was safe at his home in an apartment block in Molochio, behind the mountainous Aspromonte area in Reggio Calabria.

The stunned ‘Ndrangheta boss did not resist his arrest and was led away in handcuffs. During a search of the home, agents found a gun, ammo, and various materials that could prove useful for future prosecutions. At the time of his arrest, Fazzalari was accompanied by a 41-year-old woman, who was also placed under arrest for being in possession of a firearm and stolen goods.

Fazzalari is considered part of the 'Ndrangheta network which operates primarily in Taurianova, Amato and San Martino di Taurianova, with branches throughout the province and other countries. In the early 1990s, he was one of the protagonists of the bloody feud in Taurianova that saw 32 people killed, including one victim whose head was cut off.

Fazzalari’s arrest also marks yet another successful capture since the launch of Europol’s Most Wanted Fugitives website. Though this arrest was, as far as we know, not the result of a tip via Europol, the ‘Ndrangheta boss did feature prominently on the site alongside Sicilian Cosa Nostra’s boss of bosses Matteo Messina Denaro, Italy’s most wanted Mafia boss, who remains a fugitive. With the arrest of Fazzalari, the spotlight shines bright and heavy on Messina Denaro, whose circle of protection is slowly being peeled off one layer at a time while he continues to evade justice.

For him and other Mafia fugitives, Italy’s Interior Minister had a simple message. “You can’t escape justice,” Interior Minister Angelino Alfano told reporters after the arrest was announced. “These are the victories that comfort and support us on this difficult, but possible, fight against organized crime. It’s the award for the ongoing work of police and magistrates, brought forward with patience, determination and professionalism.”

He concluded, “Fazzalari is one of the most important fugitives, a leading figure in organized crime and at the head of the ‘Ndrina – ‘Ndrangheta Clan - that operates in Taurianova.”

Italy’s Prime Minister Matteo Renzi hailed the arrest as well, writing on Facebook, “A very difficult task made possible by the professionalism and dedication of law enforcement and the judiciary. I am proud of the men and women who serve the State and on behalf of all Italians I called the Commander Del Sette and the chief prosecutor of Reggio Calabria Cafiero de Raho to express our most affectionate gratitude. Thank you so much from the bottom of my heart! We continue to fight crime wherever, inch by inch, house to house. Long live Italy!”