Power Play: The kidnapping and release of El Chapo’s son 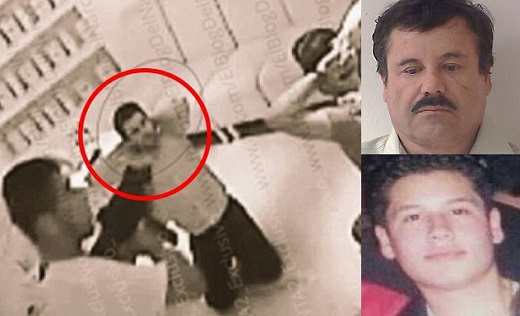 A very bold power play. That’s what happened on the night of Monday, August 15, in the trendy La Leche restaurant in the Mexican beach resort Puerto Vallarta.

Inside, Jesus Alfredo Guzmán Salazar, the youngest son of imprisoned Sinaloa cartel boss Joaquín “El Chapo” Guzmán, and his entourage were enjoying an expensive meal when men armed with assault rifles entered and held all patrons at gunpoint. They then took Jesus Alfredo and five other men outside and placed them into awaiting pickup trucks.

The son of Mexico’s most powerful drug lord had just been kidnapped.

In the week following the brazen kidnapping, it became clear that despite media around the world reporting on this incident and police in Mexico offering its services to the Guzmán family in finding their kidnapped relative, this was a Cartel affair and none of our business. The Guzmán family and Sinaloa cartel would handle this themselves, a spokesperson said.

Who would be strong – and crazy – enough to kidnap El Chapo’s son? Meet the Jalisco New Generation cartel, which is making a fast and sharp rise in Mexico’s narco world thanks to its use of extreme violence and scores of daring attacks on rival cartels and members of law enforcement.

The group made its mark when it parked two trucks containing 35 dead bodies at an underpass near a shopping mall in Boca del Río, Veracruz. Passersby were treated to a horrific scene reminding them of the vicious war that raged through their country.

The Jalisco New Generation cartel claimed the dead had been members of the Los Zetas cartel, which was, at that time, known as one of the most ruthless groups in Mexico. Later, however, authorities found that none of the dead had been part of Los Zetas or even organized crime in general. These were just props. Using random people like that was probably the most terrifying thing about these murders.

Interestingly, the Jalisco New Generation cartel originated from a group that splintered from the Sinaloa cartel. In a world dominated by death, torture, and greed alliances can change very quickly.

With El Chapo’s 29-year-old son back home safely, one question arises: What exactly were the kidnappers hoping to achieve?

Whatever it is, they could not achieve it by arranging a formal face-to-face meeting with El Chapo’s sons – and if they did arrange that, it apparently didn’t have the satisfactory result they were aiming for.

Though the Jalisco New Generation cartel has risen fast to become one of Mexico’s most powerful groups, it still lacks plenty of things. For one thing, it needs drug routes to smuggle its lucrative product into the United States. Those trafficking corridors are pretty much all under the firm control of El Chapo’s Sinaloa cartel.

Perhaps the Jalisco cartel bosses thought that by kidnapping Jesus Alfredo, they would be able to negotiate their own little route into the United States? Perhaps they negotiated for a better price? Or perhaps this was about flexing muscle.

Maybe the Jalisco cartel wanted to show how weak the Sinaloa cartel had become now that its supreme leader is behind bars and on his way to be extradited to the United States. Maybe. But why didn’t they kill his son then? Why did they keep him alive and allow him to return unharmed?

No, with Jesus Alfredo back in one piece, it’s more likely his kidnapping was part of a negotiation process in which the Jalisco cartel aims to increase its territory and influence. And seeing how El Chapo Junior is alive and well, they were satisfied with the Sinaloa cartel’s response.

Of course, this is all speculation. No one outside of the Guzmán family and Jalisco cartel kidnappers knows what was said or negotiated. All we can do is guess. And while we play this guessing game and analyze the power play, we can look back at similar situations in which rivals messed with a crime boss’ relatives.

Like in 1981 in Colombia when guerrilla organization M-19 kidnapped Martha Nieves Ochoa Vasquez, the daughter of Fabio Ochoa Restrepo and sister of Jorge Luis Ochoa Vásquez, father and son Ochoa ran one of Colombia’s most powerful crime groups and had a close friend in drug lord Pablo Escobar. Instead of negotiating, the drug bosses formed a group known as Muerte a Secuestradores, which means Death to Kidnappers, and made it clear they would hunt down and kill the guerrilla kidnappers. Martha was released several months later.

Or in 1983, when Darío Sepúlveda, the lover of Miami drug boss Griselda Blanco, broke off their relationship and moved back to Colombia, taking their son Michael with him. Though one can argue whether it is called kidnapping when a father or mother takes his own child home, Blanco was crystal clear in her response: She had her former lover killed and her son was returned to her in Miami.

At least in these two cases, the kidnapping did nothing to help the criminals achieve their goals. Whether the kidnappers of the Jalisco New Generation will have more success remains, like pretty much everything in this case, guess work.