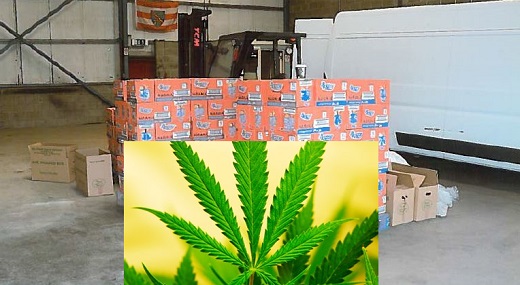 What seemed like a pretty healthy way to traffic 167 kilograms of cannabis turned out to be too good to be true. Three men behind a plot to smuggle the drugs into Northern Ireland received prison sentences of two years and four months for their roles on Tuesday. As we all know, prison isn’t the healthiest environment to spend several years in.

53-year-old Mark Fleetwood and 63-year-old Paul Green, both from Birmingham, were caught red-handed as officers of Great Britain’s National Crime Agency (NCA) watched them load the batch of 167 kilos of cannabis resin into a white van at a retail park in Camlough, Co. Armagh in April 2015. The drugs, which had a potential value to organized crime of £150,000 and a potential street value of £800,000, had been hidden among orange juice cartons in pallets imported from Spain via Dublin, Ireland.

The men were led, authorities say, by 54-year-old Stephen Dainty, also of Birmingham. Over a period of two months, he rented a unit in the retail park, organized logistics around the consignment, and arranged for Fleetwood and Green to travel from Birmingham to Newry to take delivery of the drugs and facilitate their onward distribution.

When NCA officers searched Dainty’s home they found documents relating to the orange juice delivery and were able to place the three together on flights between Birmingham and Dublin by analyzing telephone and computer communications.