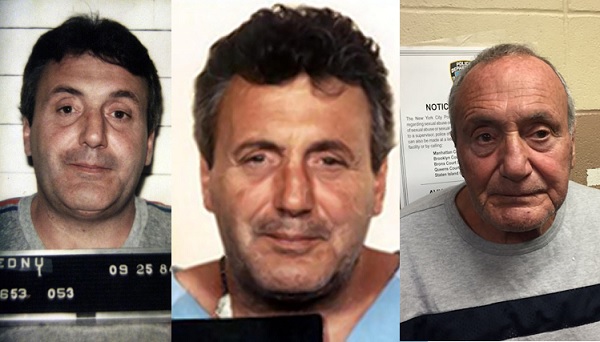 Brooklyn mobster Salvatore “Sallie” DeMeo (above, aging through his mugshots) is another great example that when it comes to the Mafia: You don’t retire. In his late seventies, he is still scheming and making millions in the process. But these riches come at a price, one that the government insists he pay.

You could call him a blue-collar kind of mobster. As a former sanitation worker, DeMeo isn’t afraid to get his hands dirty and get the job done. In the 1980s and 1990s, he ran a robbery crew in New York’s Genovese crime family of which he is a longtime member.

His thieving antics caught up to him in 1996, when he was charged with stealing $400,000 from a New Jersey bank. Trying his best to stay out of prison, he went on the lam, and as a result he was featured on America’s Most Wanted. Running from the law will only get you so far and it was no different for DeMeo who was eventually convicted and sentenced to 57 months in federal prison.

But he wasn’t done with ‘the life.’ In 2002, he pleaded guilty to a bank stick-up and an armored car heist. And on December 15, 2016, he was busted again, as he was caught up in what authorities have named “Operation Shark Bait,” a long-term investigation into DeMeo’s Genovese family mob crew that ran lucrative illegal gambling and loansharking operations throughout New York.

According to the indictment, the illegal off-shore gambling operation was based in Costa Rica and was available online via www.4Spades.org. The website delivered the mob crew millions of dollars’ worth of wagers.

DeMeo pleaded guilty to the charges and was sentenced to 5 years of probation in September of this year. A pretty sweet deal for such a longtime gangster. But authorities, apparently, weren’t quite done with the aging goodfella.

On October 12, DeMeo was charged with tax evasion. Prosecutors claim he failed to report $2 million in capital gains and stiffed the government out of $367,000 in taxes. He inherited two pieces property in Brooklyn from his father and sold off all his shares.

Hoping to hold on to as much cash as possible, he tried to hide it from the IRS by cutting up his proceeds into smaller portions and stuffing the money into other people’s accounts. He put $1 million into the account of a plumbing business that was run by another Genovese family mobster. Much of the money is untraceable, prosecutors say.

DeMeo was released on $2 million bond and faces 41 months behind bars if convicted.