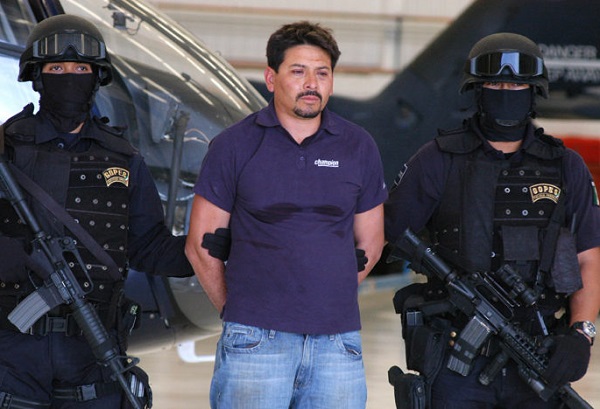 Rueda-Medina built his career in La Familia Michoacán, a Mexican drug cartel and organized crime syndicate based in the Mexican state of Michoacán, on violence and death. He eventually became the group’s chief hitman, in charge of hunting down rivals.

By 2007 he held a leadership position within the organization. La Familia was responsible for trafficking thousands of kilograms of methamphetamine into the United States through border checkpoints near Laredo, Texas and Tijuana, Mexico and delivered to stash locations in the Northern District of Texas and elsewhere.

La Familia used a sophisticated network of individuals in Mexico and the United States, according to plea documents, to distribute the methamphetamine in the Dallas-Fort Worth area and to collect proceeds from the methamphetamine sales. The drug proceeds that were collected were delivered to cartel members or associates in Mexico either by way of bulk cash smuggling in vehicles utilized by its couriers or through money remitters such as Western Union.

Rueda-Medina’s was arrested in Michoacán, Mexico on July 11, 2009. Less than six months later, on February 25, 2010, the U.S. Department of the Treasury sanctioned him under the Foreign Narcotics Kingpin Designation Act (Kingpin Act) for his involvement in drug trafficking.

Placed on this list, he saw a block on all his property and interests in property, which were subject to U.S. jurisdiction. It also prohibited U.S. citizens and companies from doing any kind of business activity with him, and it virtually froze all of his assets in the United States. Cut off from his wealth, he spent seven years sitting in a Mexican cell, until he was extradited to the United States on January 27, 2017.

“High ranking Cartel figures operating in the North Texas area will not be tolerated,” said Special Agent in Charge Clyde E. Shelley.  “The DEA and The US Attorney’s Office are working around the clock to combat the loss of life due to Medina and the continuing threat posed to our communities by the remnants of the La Familia Michoacán.”

“The cartel leadership in Mexico is not immune from our reach,” said U.S. Attorney John Parker.  “It may take time, but we’ll take whatever time is necessary to bring justice to those who export their drug-related misery and death to our north Texas communities.”