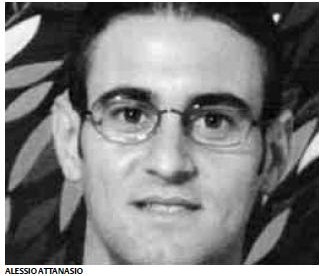 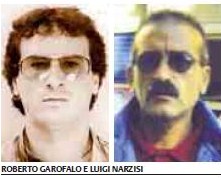 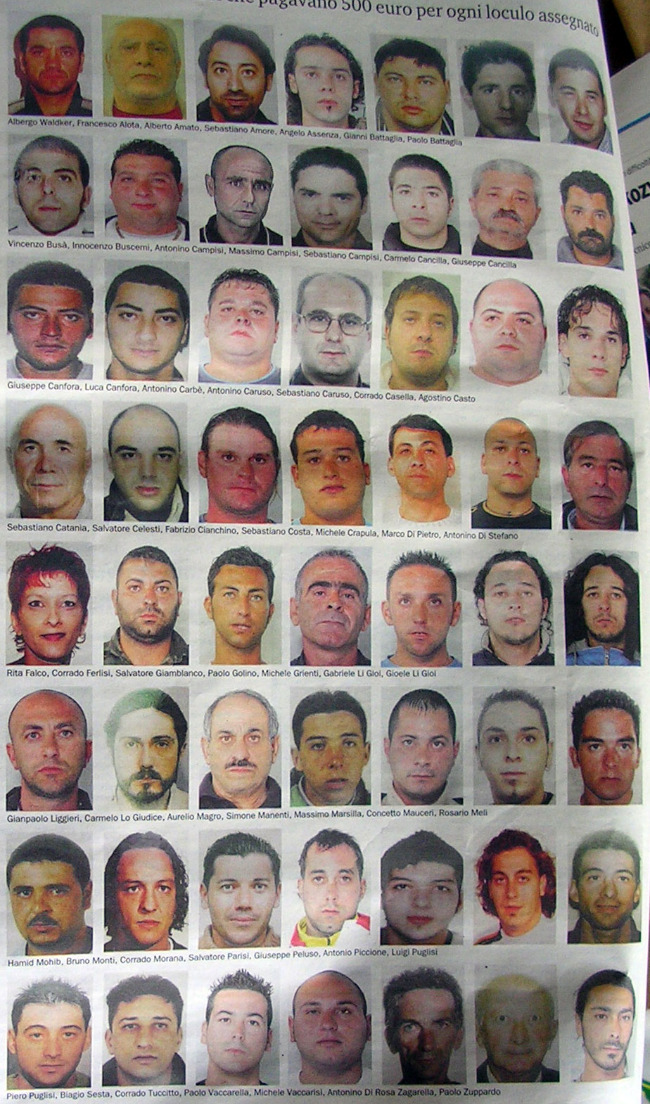 Above: Mafiosi arrested during "Operazione Nemesi".

Siracusa province
The first mafia cosca in Siracusa province was started in 1974 by the imprisoned Agostino Urso “u prufissuri”, Totuccio Schiavone, Nunzio Rizza and Clemente Alberto leone (19 december 1980 he robbed a post office and he was 8 march 1995 arrested).

Siracusa province
Then in 1981 started Rizza and Schiavone their own mafia clans. Agostino Urso had then in 1981 the boss Nunzio Rizza killed. Later were killed Corrado Scalora, Armando Capodicasa.

San Cataldo (Cl) murdercase Carmelo Cerruto
24 November 1982 was in San Cataldo prisonguard Carmelo Cerruto killed, he was the father of the killed Emanuele Cerruto. In may 2000 got for his murder Giuseppe Di Benedetto from Siracusa a lifesentence while Cataldo Terminio and Vincenzo Buccheri got 23 years and former San Cataldo capomafia Calogero Rinaldi who had become pentito got 18 years.

In 1989 was Salvatore Caruso arrested and the later pentito Giuseppe Di Salvo would talk about him.

Siracusa Schiavone clan orders murder of Paolo Iacono
9 september 1986 they tried to kill Paolo Iacono in Siracusa. The order came from the Schiavone clan. In the killercrew were Sebastiano Granata, Massimo Palumbo, Salvatore Scorpo. They had been ordered by Francesco Scottoli.

Siracusa attack at Giuseppe Sgandurra
8 December 1986 they try to kill Giuseppe Sgandurra in Siracusa. In the killerteam were Silvana Agosta, Massimo Palumbo, Salvatore Scorpo. Francesco Scottoli was the one who shot at Sgandurra who still escaped.

Siracusa attack at Vittorio Buccheri
10 February 1987 they tried to kill Vittorio Buccheri in Siracusa. In the killercrew were Francesco Scottoli and Giuseppe Camerata. Buccheri was several times shot with a revolver 357 magnum but still escaped.

Siracusa attacks at Carmelo Romeo
11 and 13 february 1987 they try to kill Carmelo Romeo in Siracusa. In the killerteam were Massimo Palumbo, Salvatore Scorpo, Francesco Scottoli. Scorpo was the one who shot at Romeo but both times Romeo escaped. Carmelo Romeo was killed in november 2001.

Milan (Siracusa diaspora)
4 March 1991 in Milan the from Siracusa coming big cokedealer Giuseppe Russo (36) gets arrested, he worked for a gang of Calabrians and Sicilians.

Lentini (Sr) clan Nardo war with Scordia (Ct) clan Di Salvo
8 april 1992 there is a massacre in Cassibile when they kill Salvatore Campailla (25 and a nephew of Di Salvo), Salvatore Carbonaro (24) and Salvatore Barresi (32 and also family of the boss Di Salvo). Accused were later Antonino Trigila, Sebastiano Bologna, Filippo Indaco, Vincenzo Liistro with Sebastiano Nardo, Concetto Aparo and Antonino dell'Arte, the last 3 got lifesentences. It is the start of a war between the Nardo clan and the clan Di Salvo from Scordia. Antonio Dell’Arte stato condannato all’ergastolo con il processo "Tauro" per la strage del bar Oasi, avvenuta a Cassibile nel 1993

Scordia (Ct) murdercase Nicolo Agnello
11 april 1992 was in Scordia the criminal Nicolo Agnello killed (he works for the boss Di Salvo), his son is Massimo Agnello.

Noto (Sr) capomafia Antonino “pinnintula”Trigila
9 September 1992 were in Noto then Corrado Caldini and Rosario Spatola killed in a car. Later were accused Antonino Campisi, Antonino Trigila, Vincenzo Liistro and Filippo Indaco. The 2 were killed because they trafficked in drugs and were attracting police attention.

Noto (Sr) capomafia Antonino “pinnintula”Trigila
25 november 1992 was Giuseppe Coletta killed in Avola. Coletta had witnessed an attempt to murder somebody and was killed because of this. Later were accused Sebastiano Bologna, Antonino Campisi, Filippo Indaco, Vincenzo Liistro and Antonino Trigila who had ordered the murder.

Carmelo Urso killed
Agostino Urso his brother or nephew Carmelo Urso was killed 2 march 1993 and connected to his murder is Carlo Marsala.

Noto capomafia Antonino Trigila
In 1994 was Salvatore “Teddy” Mollica (37) owner of publicity firm “Ramona”killed by Alessandro Greco at the orders of Antonio Trigila.

Noto (Sr) capomafia Antonino “pinnintula”Trigila
21 September 1994 they try to kill Massimo Caccamo in Pachino. Later were accused Emiliano Bellofiore, Martino Rustico and Giuseppe Trigila, the last had ordered the attack. Caccamo should have been killed because he was close with the clan of Salvatore Giuliano. The attack went wrong because many children were around.

Aparo clan murders Antonio Zimmitti
In January 1996 was in Siracusa killed Antonio Zimmitti in his car and his murder was ordered by Antonio Aparo and Aparo clan member Giovanni Latino (51 when he was arrested ??? ). Latino was convicted in the Gioconda trial.

Rome (Siracusa diaspora)
7 July 1996 was in Rome Benedetto Spataro (48) arrested , he is a member of Salvatore Privitera’s cosca from Siracusa.

Scordia (Ct) murdercase Umberto Di Salvo
30 October 1997 was Umberto Di Salvo (28) (a son of Francesco Di Salvo who is a brother of the boss pentito Giuseppe Di Salvo) shot dead in the pizzeria of his wife and were 4 wounded under whom Salvatore Cannizzaro.

Scordia (Ct), Francesco Di Salvo
11 November 1997 was in Scordia a bodged ambush at Francesco Di Salvo (54), the brother of the pentito boss Giuseppe Di Salvo, when he visits at the cemetery the grave of his 30 october in a pizzeria killed son Umberto.

Siracusa
In april 1998 in Siracusa the dutchmen from the town Utrecht Sebastiaan Bonekamp (30), Marcel de Koder (34) and Gerardus “Gert” Heideman got shortly arrested for the kidnapping of Anne Marie Lievens (38), her friend Pepe Hofman (22) and her small kids. She had divorced in december 1997 businessman and millionair Hans Daniel Melchers. They had mostly stayed around Catania. (melcher’s daughter Claudia Melchers was later also kidnapped by Ihsaan M).

Siracusa murdercase Salvatore Galeota
8 January 2000 were in a bar wounded Aldo Galeota (40) and his son Salvatore (19), who later dies, and also wounded is Francesco rendis (19).

Sebastiano Urso
9 december 2000 were in Siracusa 12 women arrested who ran the heroin business for their imprisoned husbands. They were part of the “Corni”clan. They were capomafia Sebastiano Urso’s sisters Maria, Irene and Imrella Urso, his ex wife Rosetta Di Luciano and Lucia Spichetti.

Santapaola ally Nardo from Lentini got into a feud with Scordia’s Di Salvo clan acting boss Biagio Campailla (the nephew of Di salvo who became boss when Di salvo became pentito). Their clash costs late 2001 and early 2002 thirteen murders and 2 disappearances and starts with the attack at nardo capo Francesco Malino from Lentini. Francesco malino escaped from an attack in January 2001. The Nardo clan tries to get back the area taken by Scordia capomafia Di Salvo and his allies the Cursoti.

Siracusa policeoperation "Agamemnon"
7 March 2001 police end operation Agamemnon. police arrested 14 people accused of helping it take over Italy's National Institute for Ancient Drama, which has been staging theatrical productions in the Greek amphitheatre at Syracuse, Sicily, for 87 years. investigators said the Mafia began controlling the theatre's car park, then the usher services and the renting of cushions, and eventually assumed complete financial control, boosting costs by up to 500%. The influence of organised crime on theatre contracts transformed a 500,000 lire (£163,000) profit in 1994 into a 5bn lire loss four years later, they said. Among those arrested was the institute's artistic director, Filippo Amoroso, 52, who is also a professor of drama at Palermo University and artistic director of the principal theatre in Catania. He was joined by Michele Midolo, an alleged Mafia boss linked to the Urso-Bottaro crime family. Another suspect is a leading classical Greek scholar, Umberto Albini.

Siracusa murdercase Angelo Sparatore
4 May 2001 was in Siracusa Angelo Sparatore killed, he was the brother of pentito Concetto Sparatore, who worked for years as a killer for the Urso-Bottaro cosca, his testimonies led to operation "Count down". The victim had refused to join the protection program for family of pentiti.

Scordia (Ct) murdercase Massimo Agnello
24 june 2001 was in Scordia the criminal Massimo Agnello killed, he is the 4th killed within a month in Scordia in the 20 year old war and his father Nicolo Agnello had been killed in 1992.

Francoforte double murdercase Scordia mafioso Lo Presti and Lentini capodecina Antonio Mallia
10 July 2001 was Lentini capodecina Antonio Mallia (he is close with the since 1992 imprisoned capomafia Nello Nardo) killed in Francoforte while his nephew Giuseppe Benvenuto was shot in the leg. Also Scordia mafioso Emanuele Lo Presti was wounded and died, police suspect that Lo Presti had been one of the killers.

Militello (Catania province) murdercase Angelo Gambera
2 August 2001 was near Militello (Ct) the body of the killed Angelo Gambera found, he was the brother in law of a recently killed victim of the feud in Scordia. Gambera had been killed after which they had put his body on fire.

Double murdercase Scordia (Catania province) mafiosi Salvatore Renna and Domenico Cusumano
28 september 2001 were the Scordia mafiosi Domenico Rocco Cusumano (30) and Salvatore Renna (26) kidnapped, interrogated and killed. Renna had already the month before been attacked and wounded. The Di Salvo clan is suspect and they had to avenge the 4 murders of their men who had been done before.

Scordia cosca Di Salvo- Campailla war with Lentini cosca Nardo ends
Lentini “family” (Sr), ran by boss Sebastiano Nardo and supported by Santapaola “family” from Catania, won the war and only the intervention of Laudani “family”, who represented Scordia (Catania province) inside the Commission, saved it from extermination.

Siracusa
3 September 2002 was in Siracusa the young man Gaetano Zappulla killed. Police think the murder is linked to the murder of Gaetano Barberi who had been killed 1 july 2002. Zappulla was suspected of the murder of Barberi and Zappula worked with Umberto Piantini, an associate of the Santa Panagia clan.

Murdercase Luigi Lanteri
20 September 2004 were by the Dda from Catania the criminals Angelo Caruso, Paolo Furno and Francesco Insolia arrested because they are part of the Nardo cosca from Lentini (Sr) and they had killed 4 january 2001 Luigi Lanteri, Lanteri was suspected that he wanted to take over from Nello Nardo who was imprisoned for life, police were helped by the pentiti brothers Vincenzo and Giuseppe Piazza who had confessed they had participated in the murder.