Racketeering and drug charges for leaders of Bandidos gang 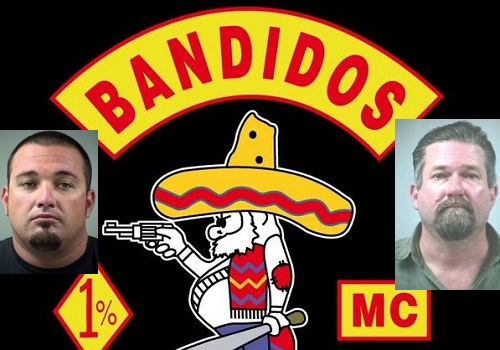 Authorities in Texas have arrested the highest ranking leaders of the Bandidos Outlaw Motorcycle Club on federal racketeering and drug distribution charges, yesterday. Charges stem from Bandidos’ war with rival biker gang Cossacks MC and a drug ring run by Bandidos leaders and members of its Colorado chapter.

All men were placed under arrest Wednesday morning. Pike, Portillo and Forster remain in federal custody. If they are

convicted, the defendants face up to life in federal prison.

According to the indictment, beginning in 2013, the Bandidos’ National Vice President John Xavier Portillo (right) declared the club was “at war” with the Cossacks MC because the club wanted the Texas rocker – shown on the bottom of the back of the vest - all to itself.

The result was predictable and bloody.

On November 2 of that year, a group of around ten Bandidos bikers allegedly confronted several Cossacks members in Abilene, Texas. After taking the whips off of the parked motorcycles owned by the Cossacks, the Bandidos began assaulting the rival bikers and stabbed them with knives, resulting in serious injuries to four Cossacks.

The president of the Bandidos Abilene, Texas, chapter then proceeded to threaten the Cossacks, stating, “This is our town. If you come back I will kill you.”

When Bandidos went to a sports bar which was known to be a Cossacks hangout in Wise County, Texas, they were disappointed to see no rival “colors” present. Upon leaving the Bandidos posted a “Bandidos” sticker on the bar door.

Rival bikers weren’t so lucky on December 12 of 2014, when several Bandidos entered the Gators Jam Inn in Fort Worth, Texas, and crashed a meeting between the Cossacks and the Ghost Riders and Winos, two other motorcycle clubs. The Bandidos allegedly assaulted all those present and one member of the Ghost Riders was shot and killed.

Though not named in the indictment, the violent war also caused the shooting at a Twin Peaks restaurant in Waco, Texas, that left nine people dead and saw the arrest of 170 bikers.

The indictment further alleges that in 2014, Portillo received methamphetamine from Colorado-area Bandidos members and that Forster (right) was selling ounce quantities of methamphetamine.

“Operation Texas Rocker has inflicted a debilitating blow to the leadership hierarchy and violent perpetrators of the Bandidos Outlaw Motorcycle Gang,” said Joseph M. Arabit, Special Agent in Charge of the Drug Enforcement Administration-Houston Field Division. “This 23-month operation highlights a deliberate and strategic effort to cut off and shut down the supply of methamphetamine trafficked by the Bandidos as well as other related criminal activity.”

“These indictments and arrests are the result of the ongoing partnership and collaboration between the FBI, DEA and DPS to neutralize one of the most dangerous criminal organizations in Texas,” said FBI Special Agent in Charge Christopher Combs.  “This effort not only exemplifies our commitment to prevent gang violence and criminal activity from poisoning our communities, but it also sends a clear message that we will relentlessly pursue and prosecute the leaders and members of these violent criminal enterprises.”

Get the latest news at our news section.