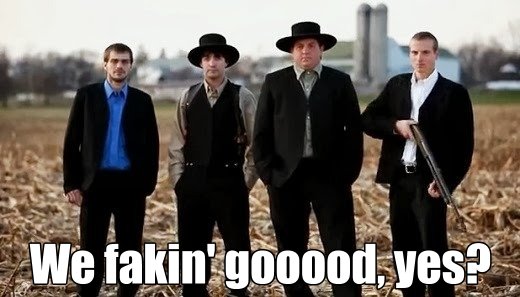 Organized crime has become a huge hit with reality TV producers. With reality soaps like Amish Mafia and Mob Wives pulling in millions of viewers each week there is a lot of money to be made off the stories of underworld figures. Of course, that does not mean these shows offer any type of reality. Most if not everything is as imaginary and fake as Kaiser Soze.

What would it be like to be a fly on the wall in a house where real gangsters openly discuss gangland murders and operations? For most of us crime buffs and a large percentage of the public it would be a thrilling experience, one that gives us an insight into the underworld unlike anything else could.

And that’s why reality gangster TV is a goldmine. There is a large audience that seeks that kind of thrill ride. Each week between 2 and 3 million viewers tune into Discovery Channel to watch Amish Mafia. The screaming and cursing on Mob Wives manages to hypnotize 1.5 million viewers with every episode. Their success has spawned many new series dealing with “real” criminals. Mob Wives now has three spin-offs: Mob Wives Chicago, Big Ang, and the upcoming Miami Monkey which aired yesterday and “stars” Angela “Big Ang” Raiola. Two spin-offs? Yes, Big Ang lives up to her nickname. But the female wannabe gangsters are just a small part of the fake underworld landscape featured on television.

Another big show is The Devils Ride about outlaw motorcycle gang The Laffing Devils. Their Discovery Channel website introduction reads: “The Laffing Devils, which was once one of the fastest growing motorcycle clubs in the city, has recently splintered off into two separate clubs. Now they are going head to head with new, rival club Sinister Mob Syndicate (Sin Mob for short) for honor, respect, colors...and maybe a little bit of revenge.” Oh goody!

Fuck the wives of mobsters and Amish freaks! Who wants to watch that shit when you can ride along with an outlaw motorcycle gang similar to the Hells Angels?! This is Sons of Anarchy but in real life! I imagine that’s how the producers brainstormed their way to the clusterfuck that is The Devils Ride. The show embodies all that is wrong about reality gangster TV. Photo: Biker brawl or group hug? Jerry Springer has seen more serious action in one minute than these "bikers" ever saw.

All these shows pretend to offer their viewers a peek into a life that usually is closed off to the average Joe. Using various camera techniques and constant visual reminders that so-and-so is married to, related to, or him/herself is the capo di tutti capi of all farms in Ohio the makers emphasize that viewers are seeing someone they normally would not see. Certainly not in their original environment, hustling and scheming as cameras record their every move.

And that’s exactly why all of this is fake. No real criminal would want a camera crew to film the planning and executing of his crimes. The reason for this is simple: Crimes are illegal and when proven in a court of law they can result in time in prison for the defendant. Just ask any of the men who are in some way or another connected to one of the Mob Wives.

Yet, despite all of this there is still an active discussion over whether or not these shows offer us reality or a The Office/Parks and Recreation-type of parody on a real life group of people. So let’s end all of that right here and now.

Real criminals do not want to be filmed while committing crimes. Period. That is the main piece of evidence that all these reality gangster TV shows are faker than Pamela Anderson’s tits. But if that does not convince you let’s take a look at some of the tools the makers of all these gems use over and over. And over again.

If it’s filmed in a documentary style it must be true!

It’s been win-win for reality TV, not so much for documentaries which use reality TV techniques to spice up their documentary. Case in point: American Underworld. In this series photojournalist Mark Allen Johnson dives into the shady world of crime in America. He begins each documentary by establishing his credentials as a serious journalist for Newsweek and TIME Magazine, yet in this documentary series he mostly says “Amen, bro” to anything he is told. He also adds a sensationalist flavor to the show by making moves solely designed to give viewers a thrill.

In one scene we see Johnson driving his cameraman to a location where a major steroid dealer has set up his lab. The cameraman is blindfolded because, Johnson says, “no one can know where I’m at. Not even my cameraman.” Man, that’s some straight up Miami Vice shit right there, no? Except, you know, the fact that a camera is taping the entire ride to the dealer’s location for the viewers at home and any cop that might confiscate the tape. As the two men enter the dealer’s house, the cameraman is allowed to take off his blindfold. He then has to hand over his driver’s license to the dealer who, at this point, starts reenacting the scene from Goodfellas in which Jimmy the Gent hijacks a truck and threatens the driver with “You may know who we are, but we know who you are.” The steroids cook fails to live up the DeNiro’s performance but it sets the tone. We are definitely watching some real crime stuff, dude!

This reenactment of famous scenes from crime movies can be seen in all the reality gangster TV shows. The producers of Amish Mafia pretty much based their entire script on The Godfather trilogy. Ripping off characters and storylines while exchanging Sicilian culture and tradition with that of the Amish.

The Mob Wives know movies like The Godfather and Goodfellas by heart and frequently use lines that are eerily similar to the ones used there. It’s always funny to hear them blab on about the importance of omerta, the code of silence, in one scene when they openly discuss their relatives’ crimes in the next. Sometimes they will play hard-to-get, only giving us a glimpse. In the end their level of omerta is based on ratings and more will be revealed as soon as viewers start tuning out.

The use of threats is commonplace in all of these shows. Either a Mob Wife threatens to pull out some hair weaves or a Laffing Devil claims to be willing to kill whoever to protect his club. The M.O. never changes. Usually it is at these times that they scramble together some lines from The Godfather, Sons of Anarchy, or one of the Grand Theft Auto videogames and blend them together. Yes, the lines are that corny.

With all these threats being fired at one another left and right viewers will want to see the words being backed up by actions. Cause that’s what happens in real life right? In The Devils Ride we see White Boi steal back his car from some stranger. When White Boi was sent to prison he left his beloved car with a good friend. When he is released and him and a biker pal come back to get his car it turns out his “friend” sold it.

With the cameras rolling the two bikers threaten the friend and then go looking for the car. They find it at a tattoo parlor (location, location, location – these viewers will most likely enjoy tattoos) and with his buddy on the look-out, White Boi breaks into the car he hadn’t seen since going to gangster college. Apparently, before going to prison he had the car outfitted with cameras because viewers get an inside look from inside the car as White Boi breaks in and drives off at high speed. Are there seriously people out there who believe this bullshit is real?

The Devils Ride, Amish Mafia, and Mob Wives all show a bit of mild violence or talk about violence having just taken place away from the cameras. Property is destroyed frequently yet no one is arrested. The reason for all of this is simple: It’s a show. These guys are all acting. The Laffing Devils and their feared rivals Sin Mob only exist as TV personalities (see here).

The blurred line between real and fake

The problem with reality gangster TV is that it claims to show reality while presenting us a staged and scripted lie. In television series like Sons of Anarchy or The Sopranos audiences are treated to much more violence, but we know it’s fake. We know something is presented to us that is not allowed in real life. If The Sopranos were presented as real life we would wonder why no one ever gets arrested. With reality gangster TV younger viewers might get a distorted view of what is acceptable and what is not. If rap music and violent videogames are considered such a bad influence then why are television shows allowed that glorify -self-proclaimed- real criminal behavior?

Above all it’s just plain stupid. Like most of reality TV. But the subject matter is too serious to brush this discussion aside. Either we stop caring about facts and reality and anyone can claim to tell a story “based on true events” and even claim that an entire show is real life or we demand the truth before we are fed a bunch of lies. With so many people online asking whether or not these shows are real producers need to stop fooling around and start being honest. Then again, why would they destroy a huge moneymaker by telling the truth? It’s a harmless racket. After all, none of the blood is real.

Good story with a twist of humor!.I don't want to knock any fellow readers' fav' shows (personally I'm an SOA junkie),but a lot of this stuff is beyond-ridiculous "reality" TV.If it's The Mob give me a documentary or true-life movie any day as opposed to this crap.Tried watching that Gotti show a couple times,"Growing Up Gotti",but gave up in disgust.I really enjoyed Victoria's book about her life and father tho'.Did watch a really great old gangster flick the other day I'd like to reccomend,"White Heat" with James Cagney,excellent film!.