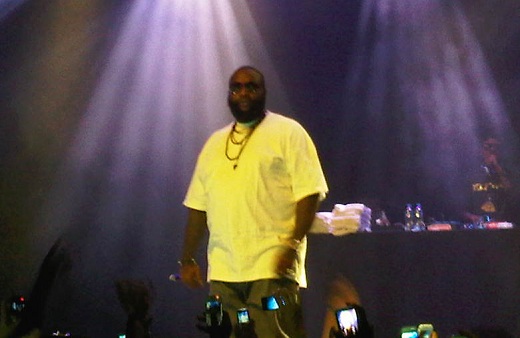 It seems the real world is finally closing in on make-believe gangsta rapper Rick Ross. Yesterday, several news outlets reported that Ross “was forced to cancel concerts in Charlotte and Greensboro, North Carolina, scheduled for this weekend.” The concerts were part of his Maybach Music Tour.

AllHipHop.com quotes representatives of Ross who explain that the cancellation is due to the “apparent lack of organization and communication on the part of the tour promoter.”

However, there have been strong rumors that the rapper decided to cancel the remaining concerts because of threats made against him by members of the Gangster Disciples, a street gang that was founded by Larry Hoover. And where “Ricky Rozay” plays that he is a gangster, members of the Gangster Disciples actually do the stuff Ross raps about. Matter of fact, that seems to be their main beef with him.

According to MTV, they have a problem with the “use of their signature six-point star on his recent Black Bar Mitzvah mixtape and his mention of their leader, Larry Hoover, who is currently serving time in prison, in the street anthem "B.M.F. (Blowin' Money Fast).” In response to the planned concerts members of the street gang’s North Carolina Chapter recently put out a YouTube video warning Ross to stay out of Charlotte.

“I think I’m Big Meech, Larry Hoover” is the line in which the rapper uses the name of their founder Larry Hoover to establish street credibility with his listeners. The fact that Ross added “I think” to the line can be seen as a weird way of the rapper being honest about his gangster façade and being a tad delusional.

Rapper Rick Ross has painted an image of himself as being a cocaine kingpin from Florida. A tough street boss who does as he pleases. In reality Rick Ross is named William Leonard Roberts II. And despite rapping a good game he was never involved in the coke hustle. He did, however, work a legitimate job as a corrections officer guarding a lot of the men that he would later emulate during his hip hop career.

There is nothing wrong with a career switch of course, but the line between make-believe and reality has become blurry for Ross. He even denied to have ever worked as a corrections officer despite a clear record and photos of him in his uniform.

Ross has also been sued by the man on which he built his music empire: Rick Ross. The real Rick Ross, mind you. Also known as “Freeway Rick” Ross, a former drug boss who found out in prison there was a rapper making a living off of his name and street fame. He is currently involved in a long and winding legal battle with the rapper to try and get some payback.

Freeway Ricky is also on a mission to tell the world the truth about the man who used his name, identity, and life story to become a rap super star. (Listen to an interview Ross had with Crime Beat Radio here.)

As the real world closes in on William Leonard Roberts, a.k.a. Rick Ross, a.k.a. Ricky Rozay, it can only be a matter of time before his career takes a turn for the worse. Gangsta rappers could get away with a lot of fake war stories in the past, but in this internet era being real is all about being exactly that. Fake rappers will be flushed out. The time on Ricky Rozay’s career is running out.

No disrespect to "Rick Ross" or anyone else involved,but name-dropping can get you killed,or identifying yourself with someone you're not.Basically you're taking their rep' and name when you haven't earned it.The Hells Angels have been known to beat people half to death or cut tattoos off that are club-related when an imposter is found and La eMe will just flat-out kill you if you claim false membership or affiliation.Mr. Roberts should evaluate himself and change his lyrics or find a different kind of work.Yes,there are fake rappers,or ones that simply stretch the truth,but the real participants take this to heart,having done time,lost friends,so it's no small insult.

Well said, Dale. Allegedly Ross (the rapper) pays off a lot of gangsters to continue the use of his gangsta rap lyrics. Of course, that only gets him so far. If rap/hip hop ever wants to truly become an art (which it can) they need to drop the fake image. If it is a true history, use it. But if it is an embellishment or lie, simply tell the public straight up. Cause it doesn't make the track/song any less good. Just like fictional movies such as Scarface or The Godfather cause no riot, because no one claims it was based on a particular person.