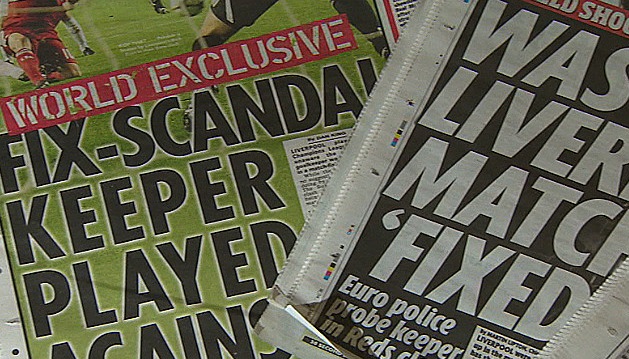 Organized crime syndicates are increasingly getting involved in sports corruption. Fixing a match means a guaranteed lucrative payout by betting on the correct outcome. Criminals operating in this multi-billion-dollar field use different modi operandi and adopt very complex structures, therefore the only successful response by law enforcement, Europol says, is to adopt a multi-disciplinary and multi-agency approach, involving all key actors from both the public and private sectors.

Sports corruption is an offence often carried out by Mafia-type groups, says David Ellero, Head of Europol’s Economic and Property Crimes Unit. “Therefore, it is Europol’s responsibility to fight it with the same approach adopted in the struggle against other crime areas such as drug trafficking and weapons smuggling. We need to ensure that the manipulation of sports competitions does not pay and does not attract more organized criminality.”

To achieve that aim, on 16 and 17 November, Europol brought together representatives from European law enforcement agencies, sports governing bodies, private companies operating in the sector of integrity services, and other international organizations, for a meeting on crime and sports.

Experts in the area of sports corruption from fifteen EU Member States and three non-EU States (Moldova, Australia and Switzerland) as well as delegates from Eurojust and INTERPOL attended the meeting, together with representatives from UEFA, the Tennis Integrity Unit and Sportradar.

Aims and objectives of the meeting were to enable further cooperation between participants by sharing concrete operational expertise and best practices in fighting sports corruption. In addition, the intelligence picture of this form of organized crime and the organized crime groups influencing it was further defined, by sharing strategic knowledge between all actors involved.

Among the delegates were also representatives from the International Olympic Committee (IOC) via their Olympic Movement Unit on the Prevention of the Manipulation of Competitions. Europol and the IOC had already intensified their cooperation in the last two years, since the latter plays an important role in protecting the integrity of sport across all Olympic disciplines.

It was the IOC that was faced with a widespread corruption scandal during the 2002 Salt Lake City Olympics. Several of its members were forced to resign in 1998, years before the Games even had begun on charges that they had accepted bribes in return for voting for Salt Lake City as an Olympic venue.

Then, during the first week of the Games, there were new allegations of bribery. This time it involved Russian Mafia boss Alimzhan Tokhtakhounov. According to the FBI, he had fixed the figure skating competition by pressuring two of the jurors, one from Russia, the other from France.

Also present was the Council of Europe (CoE), which attended for the first time. The CoE is at the forefront of the adoption of important international legal instruments to tackle sports corruption more effectively, in particular through the Convention on the Manipulation of Sports Competitions - the only international, legally binding text to exist in the field.

Whether this meeting will have an effect or not depends on how serious law enforcement is about fighting and investigating corruption. For decades, FIFA, the world’s most powerful sports organization, got away with rampant bribery and corruption. Even though it had former FBI agents among its employees.

Though it’s the shady gangster who corrupts a certain player or team, and it’s the leg breaker who utters the threats to ensure that the players comply with the organized crime groups, and it’s the groups that place the bets and reap the biggest rewards, it’s the sport’s clubs and official governing bodies that set the example and create the atmosphere that makes it all possible.

If soccer clubs are allowed to be bought by shady billionaires, it is no wonder the legitimacy of the sport starts to crumble. It always begins with the exchange of money. Once one side accepts it from a criminal source, the Mafia groups have entered the building. And they won’t leave without a fight.