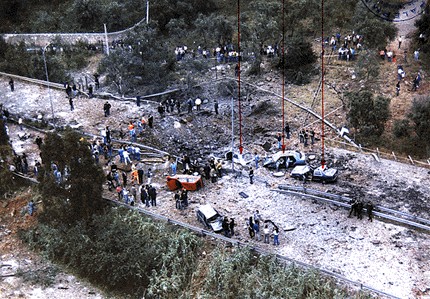 Photo: The aftermath of the bomb attack on the A29 motorway near Capaci, Sicily, that killed anti-mafia judge Giovanni Falcone, his wife and three bodyguards.

As ISIS’ reign of terror is sending shockwaves through Europe, many of us are left guessing and responding to absurd hypothetical questions. One such incident arose Wednesday during a regional anti-Mafia commission hearing when the organization’s deputy chairman responded in the affirmative to the theory that Cosa Nostra would reduce the risk of ISIS infiltrating Sicily.

“I am not surprised Sicily may be thought to be not at risk of Islamic State (ISIS) infiltration due to the presence of the Mafia,” he said. Adding that, “We've already seen that during the years of domestic terrorism in Italy. In the mid-70s Cosa Nostra exercised ‘armed surveillance’ over Sicily. It's no accident there were no kidnappings, and when they did occur they were carried out by Cosa Nostra as punishments.”

His comments quickly went viral online. Gangsters Inc. played a large part in that. Though we added that ISIS versus Cosa Nostra would be like fighting fire with fire, terror with terror, many saw only the heroic glorification.

Upon reading Fava’s comments, Mafia historian and professor at the University of Palermo Salvatore Lupo immediately rung the alarm bell, telling MeridioNews that, “To say that the Mafia is in such dominant control so that it is able to reject the infiltration of terrorism is a romantic and dangerous view.”

According to professor Lupo, Cosa Nostra can do nothing to stop ISIS. “[It’s] bigger than the Mafia and if the extremists wish to settle, they do so.”

Regarding the Mafia’s alleged involvement in reducing domestic terrorism activities in the 1970s, Lupo explains, “In those years the issue of terrorism was totally internal to our country, based on the dynamics of Italian society. The Mafia did not stop terrorism groups, rather, it was because in some areas such as Sicily, there was a lack of political ideologies that were spread and society there was very different than in the north of Italy.”

To conclude, as any of you who have read books on the Sicilian Mafia know, Cosa Nostra has been the island’s main source of terrorism for many decades. Led by men like boss of bosses Toto Riina the Mafia went on a killing spree murdering Mafiosi, politicians, judges, cops, journalists, and innocent citizens with bullets, knives, and bombs.

It’s something one needs to remember before glorifying the Mafia as some sort of heroic force fighting for our freedom. In the end it only fights for money and does not care about the greater good. Every now and then this apparently needs to be emphasized.