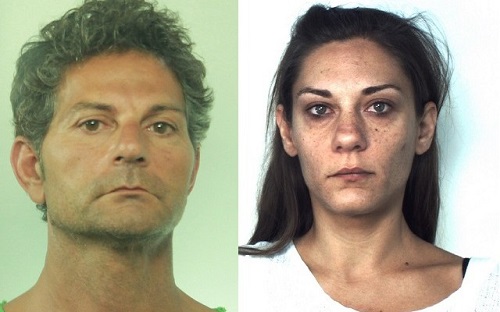 Italian police arrested 51-year-old Carmelo Piacente and his girlfriend, 31-year-old Simona Puccio - both pictured above - and charged them with weapons smuggling. Piacente is the reputed leader of the Ceusi clan, part of the Santapaola-Ercolano Cosa Nostra family in Catania, Sicily, and the alleged mastermind behind this smuggling operation.

According to Europol, “The investigation was initiated following the seizure in June 2015 of a parcel containing firearms and ammunition. That same month, on the basis on information provided by Europol, the French Police Nationale intercepted a parcel containing three pistols and a machine gun.  Both these parcels were traced back to the same individuals.”

It was discovered that Piacente and Puccio had bought a shipment of 160 decommissioned firearms from Slovakia for a total value of €45,000 euro. These deactivated weapons had their barrels perforated by a pin, which could easily be undone by changing the barrel, making the weapons ready to go. A number of these weapons had been reactivated and shipped to Malta via courier services.

Italian investigators also identified links between the suspects and Egyptian organized crime networks involved in migrant smuggling activities. They are therefore not excluding the possibility that these firearms could have fallen in the hands of criminal or terrorist organizations operating in the region.

That would prove yet another link between organized crime groups and terror networks. There have been conflicting stories about the Sicilian Mafia’s role in the war on terror. Some reports suggested how Cosa Nostra helped protect Sicily against foreign terrorists, while most reports discounted such ideas, insisting instead that the Mafia only cares about itself and how it can acquire more money and power.

This latest case would be evidence of that. It’s all about the money. Who cares about anything else? Not these two.