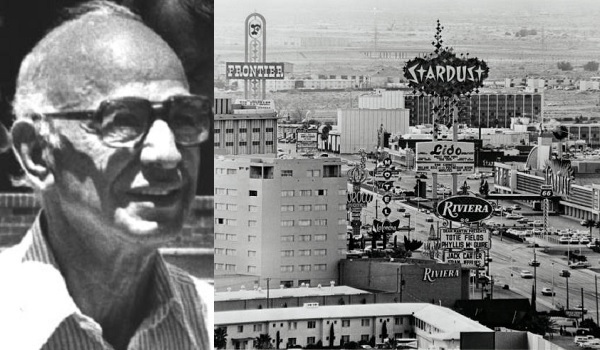 “I remember one night in Circus Circus, we had an obligation to meet, course I was young and had some balls, I guess,” Carl Thomas says. “There was two guys from the state outside, Bybee was one of them, and I was in there on my fuckin' back, snatching that money, and they weren't as far from me as that refrigerator, puttin' money in my pockets. Ah, you always, I think if you do things out in the open, you stare a guy right in the face, the guy won't think you're doin' nothin'!”

Carl Thomas was seen as “squeaky clean” by the Nevada Gaming Control Board and Las Vegas casino executives. Because of that image, casino owners, politicians and other casino executives allowed Thomas access to elite social, business and government circles. He had come up in the casino business at Circus Circus, had worked at the Stardust, and ended his career at the Tropicana.

Apparently, Thomas's story about Circus Circus was reminiscent of the time he worked at Circus Circus between 1974-1976. “Bybee” was Shannon Bybee who was a Nevada Gaming Investigator during those years. He was a young, aggressive investigator for the Nevada Gaming Control Board. Thomas thought he was pretty slick, skimming Circus Circus casino money right in front of Bybee, who had started his career as a military policeman at West Point, later became a deputy sheriff in Washoe County, NV, attended the University of Utah School of Law, joined the Nevada Gaming Control Board in 1971, and went on to become one of the most respected men in the gaming industry.

By having “an obligation to meet,” Thomas meant he was skimming to satisfy a Teamsters loan kickback. Circus Circus was built by a longtime successful casino operator named Jay Sarno. Carl Thomas would later testify that he began his skimming career at Circus Circus in 1969, when it was owned by the late Sarno. Thomas said he was asked to handle the skim at Circus Circus by Allen Dorfman, a Chicago Outfit associate and a consultant to the Chicago-based Teamsters pension fund. “He (Dorfman) told me there were obligations to fulfill and he wanted my help in fulfilling them,” Thomas testified. “It was my understanding that a fee had to be paid for the loans, and I was to do the skimming.”

Thomas would figure out methods of removing gambling money before it was counted. His favorite method was to have confederates inside the count room. He had other methods such as rigging the scales that weighed the slot machine coins or moving money from one game table to another and creating false records. The goal was to take the money before it was recorded for the Gaming Control Board to tax. In the Circus Circus case, as with other casinos with borrowed Teamster pension funds, mob associates like Allen Dorfman ensured these loans were approved and then expected this under-the-table kickback for their efforts.

Nick Civella was the quintessential Mafia Don (in the mold of the fictional Don Corleone, for those familiar with Mario Puzo’s The Godfather). At an early age, he rebelled against the older La Cosa Nostra mobsters and robbed protected gambling games. After one of his gang was assassinated and an attempt was made on his life, he was forced to flee from Kansas City to Chicago.

While in Chicago, Civella found mobsters that recognized his potential. He used the Chicago Outfit’s clout and returned to Kansas City. Within a few years, during the early 1950s, he rose to the top job of Kansas City’s modern criminal syndicate that had been enriched and emboldened by Prohibition. He saw the advantage and opportunity of a close relationship with the powerful Teamsters Union. He never acted out of passion and mob killings were always approved in advance and conducted out of the public view, when possible.

Civella was always gracious and generous to service providers, family, neighbors and other casual contacts. While he was alive, all his close family members lived within eyesight of his home. Several other made members of the Kansas City crime family lived within a one-square block radius. To be a “made member” of the family meant the person made their living primarily from criminal activity and had been inducted into the group with a secret ceremony. Civella was aware that adverse publicity from violent action in a public place was bad for the family (sometimes called La Cosa Nostra, the Outfit, the mob), and good for the government. He was quick to see opportunity and adapt to keep a steady flow of income for himself and other made members.

Understanding the value of political connections, Civella knew that he needed cash money to obtain and maintain those connections. That cash would come out of Las Vegas casinos. To keep the money flowing from the casinos, Civella needed trustworthy moles and minimal government attention.

When it came to stealing, Civella once said, “Sometimes the most obvious is the best way.” He was capable of using violence when necessary but he was also smart enough to know when to use a briefcase rather than a gun. Alongside his brother, Cork, Nick Civella would rule the Kansas City mob family from the 1950s until their deaths in the 1980s.

Feeling safe inside the law office, Civella and DeLuna continue talking about what to do with Frank “Lefty” Rosenthal. They discuss going to Chicago and talking directly to “Two Two” (Joey Aiuppa, Chicago Outfit boss). Civella believes Lefty is either already snitching or is going to snitch. DeLuna tries to minimize that perception by saying that Agosto has tried to put ideas in their heads that Lefty is snitching. He thinks that Lefty may say something at a press conference that will expose the mob and could influence or embarrass Nevada public officials. DeLuna states that he can't believe that Lefty would utter remarks that are damaging to “la familias.”

THE FOLLOWING IS A SUBSTANTIALLY VERBATIM TRANSCRIPT OF A CONVERSATION BETWEEN CARL “TUFFY” DELUNA AND NICHOLAS CIVELLA:

CIVELLA: The biggest thing that we could use, if you go to Chicago, and the best thing and the truest thing is that he's snitching, he's gonna wanna snitch.

DELUNA: But we don't know what he's gonna say and Joe don't either, Joe ain't gonna be puttin' words in my mouth to give you. These guys try to do them kinds of things, Nick, you know, you try to put something in one guy's head so he can go blab it out. And I know what he's trying to do. Yet, I, I agree he does have some justification in his, ah, how he's analyzing it, you know. But, ah, it's hard for me to conceive that Frank, that this Lefty, would go have a press conference and, and utter remarks that are, that are damaging to, to the la familias (the families) in total. It's just hard for me to conceive that.

Yes I get the impression his knowledge of the life is second to none.From both sides the fence.His factual awareness mixed with his humour makes for a great show.Keep em coming Gary and Erin.