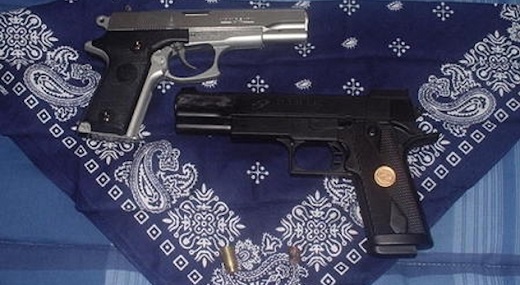 Call him a one-man crime wave. 35-year-old Akia Pete, known on the streets of Los Angeles as Studda Box, pleaded guilty on Friday to scores of crimes that could land him a 60-year prison sentence. A longtime member of the Five Deuce Broadway Gangster Crips, Pete admitted to trafficking in narcotics and participating in a series of armed robberies that targeted bank customers and small businesses.

His sentencing is scheduled for March 13.

As a member of the Five Deuce Broadway Crips, Pete was an integral part of the gang’s activities. He helped with controlling the group’s “territorial monopoly” in the crack cocaine business. Besides his work for the Crips, he also was a member of the Baby Gremlins, a clique within the gang that was used as muscle.

Pete and other leading figures of the gang would “encourage younger members of the Baby Gremlins to engage in violence against rivals and insubordinate members.”

When Studda Box wasn’t out slanging dope or causing violence, he was out on a robbery spree. He was part of several crews that, “armed with firearms, tasers and zip ties, would follow victims home from banks and rob them of their cash,” in one case taking $10,000 in cash from a business owner.

Pete was one of 72 people named in a 112-count indictment targeting the Broadway Gangster Crips that was unsealed in 2014. The arrests were the result of Operation “Gremlin Riderz,” which was conducted by the FBI and the Los Angeles Police Department under the auspices of the FBI’s Task Force on Violent Crime in the City of Los Angeles, which is one of several dozen Safe Streets Task Forces around the nation.

The Broadway Gangster Crips gang was formed in the 1970s and allegedly has grown into a violent criminal enterprise that conducts regular meetings, espouses a strict set of rules, and exacts punishments, including death, against those who cooperate with law enforcement.

In addition to committing crimes in its claimed territory east of the Harbor Freeway, the indictment alleges that the Broadway Gangster Crips sell drugs near the Skid Row section of downtown Los Angeles. “This area is desirable to the gang because it is close to Skid Row, where there is a large and vulnerable customer base of drug addicts and mentally ill persons,” according to the indictment.

Seventy-one of the defendants named in the indictment have now appeared in federal court to face racketeering charges in the indictment, which include conspiracy to violate the federal Racketeer Influenced and Corrupt Organizations Act, violent crimes in aid of racketeering, a series of robberies that targeted bank customers, weapons offenses and various drug trafficking charges.

With Pete’s guilty pleas last week, over 40 defendants have now been convicted in the case, including the three lead defendants in the RICO case – Tyrine Martinez, Tracy Harris and Roosevelt Sumpter – each of whom pleaded guilty this past summer to federal charges. Earlier this month, Sumpter was sentenced to 20 years in federal prison. Martinez and Harris are scheduled to be sentenced on December 19, at which time both defendants will face potential life sentences and mandatory minimum prison terms of 15 and 10 years.