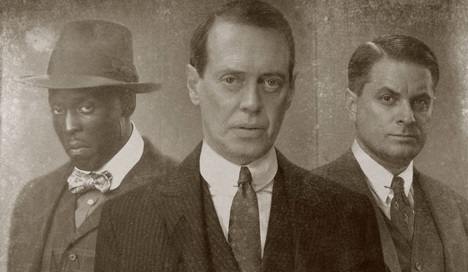 Get ready for more bootlegging, backstabbing, corrupt politicians, damsels in distress, and stone cold killers when Boardwalk Empire returns for its brand new fourth season this Sunday. We join the series in February of 1924, Nucky Thompson is laying low but faces new challenges, including a clash with the mayor, a battle with his brother Eli over Eli's college-age son, and the irresistible lure of lucrative, and perilous, opportunities in Florida.

Last season was the series best so far, packed to the brim with action, as Nucky took on the Italian gang led by Joe Masseria and found himself on the brink of destruction only to be saved by his loyal friends Chalky White and Al Capone.

His biggest nemesis in season 3 was Gyp Rosetti, an Italian mobster with serious psychological problems and a hair trigger temper that made him kill anyone in sight if he felt the mood was right… or wrong. Actor Bobby Cannavale did a terrific job playing Rosetti and his character will be sorely missed as he was the catalyst for pulling Boardwalk Empire off the horse and carriage it was on and putting it in a souped-up 1920s Ford Model T automobile that took us on a thrilling ride. 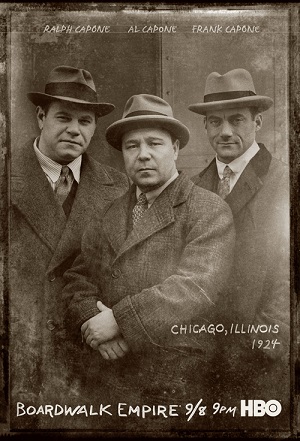 In my modest opinion, the first two seasons of Boardwalk Empire failed to live up to the hype. The plot seemed to borrow too much from The Sopranos and the various historic characters weren’t used in a way that had much impact on the overall storyline. With season 3 all of that changed. Rothstein, Luciano, and Lansky all had more screen time and played an integral part in the overall story. The addition of Mafia big wigs Joe Masseria and Sal Maranzano promises that this coming season will see a lot more plotting, intrigue, and murder.

Of course, the two aforementioned saviors of Nucky, Al Capone and Chalky White will return as well. Thank God. Al Capone was the most famous mobster in history. Bar none. Despite this fame we are all glued to our screens to see what happens to him now. British actor Stephen Graham (Snatch, Public Enemies) portrays Capone the way we like it, as a charming but brute thug who has a soft side, yet also enjoys bashing in a skull or two.

Chalky White finally gets his prized night club on the boardwalk of Atlantic City and will no doubt be closer than ever to Nucky. But the makers of Boardwalk Empire won’t make it easy for Chalky. They added actor Jeffrey Wright to the cast, who will be playing Valentin Narcisse, a violent Harlem power broker who tries to muscle in on Chalky's action, no doubt causing plenty of headaches and maybe even some bloodshed.

Watch the season 4 trailer (and see playtimes and dates) below: