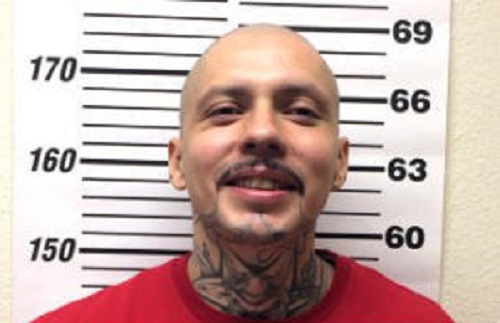 A soldier in the Syndicato de Nuevo Mexico (“SNM”) prison gang was found guilty of murder, racketeering and firearm possession on Tuesday. 42-year-old Jody Rufino Martinez (photo above) was convicted by a federal jury in Albuquerque, New Mexico. The jury acquitted him on one count of witness tampering.

Martinez has been a member and self-identified soldier of the SNM prison gang since 1998. Since joining the gang he was involved in scores of violent crimes. These included the murder of a victim on December 5, 2008 in Rio Arriba County for failing to deliver drugs to an SNM gang member.

On October 24, 2018, Martinez knowingly possessed a firearm and ammunition when he shot a victim at a residence in Santa Fe County as retaliation for supposedly disrespecting the SNM. As a previously convicted felon, Martinez cannot legally possess a firearm or ammunition.

Martinez is currently in custody awaiting sentencing. He faces a mandatory life sentence for the murder conviction, and a sentence of up to life on the RICO conspiracy conviction.