The Casalesi Clan of the Camorra 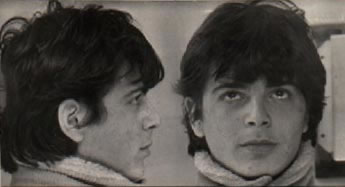 This innocent looking boy is the feared boss of the most powerful clan in the Neapolitan Camorra. Born on September 20 1964 in the town of San Cipriano d'Aversa, Antonio o'ninno Iovine woud rise to the top of the Casalesi clan. Iovine, a fugitive for 12 years, got his nickname o'ninno (the baby) because the boss of his crime family Mario Iovine (a relative) made him a capo at a very young age.

The Casalesi clan, a confideration bringing together all the crime families in Caserta province, is thought to have carried out more than 1,000 murders in the past 30 years to establish an iron grip on the area. The clan took its name from Casal di Principe. Casal (population of 20,158) is a town where 3000 people are kept under police surveillance because of prior convictions or known affiliation with the clan. Other clan strongholds are San Cipriano, Casapesenna and Caivano. The biggest moneymakers for the crime families are construction, distribution and waste management, keeping a lower profile than clans that focus on drug dealing.

The Casalesi created a monopoly in the cement market for their own contruction businesses and controlled the distribution of materials. Any business wanting to open in the area had to pay the clan for permission and then buy cement from them to build their buildings. The clan was also skimming money off the construction of the highway Rome-Naples and the prison in Santa Maria Capua Vetere (many of the gangsters ended up in that same prison).

In the distribution rackets they control the distribution of essential products. The clan controlled and extorted from Cirio and Calisto Tanzi's Parmalat, these companies had grown in multinational corporations into milk, dairy, beverage, bakey and other products. The profits were invested in real estate in Milan and Parma. After the disappearance of Antonio Bardellino, founder of the clan, five families (Schiavone, Iovine, Bidognetti, De Falco and Zagaria) took control, each with their own army.

The charismatic Francesco "Sandokan" Schiavone (picture on the left) became the capo dei capi. Schiavone and his brother Walter were since 1979 heavily involved in several bloody wars in the quest for power over the nearby Segondigliano families. When Raffaele Cutolo and the other enemies were defeated, internal feuds broke out, capo Vincenzo De Falco betrayed the second in command Francesco Bidognetti, who was arrested in February 1990. De Falco was killed in Casal di Principe a year later. In retaliation his brother Nunzio the wolf De Falco killed Mario Iovine on March 6 1991. The boss was showered with bullets, while he was standing in a phone booth in Portugal. Eventually the De Falcos were defeated, however Antonio Iovine's brother Carmine was ambushed and killed in 1994.

In 1998 boss Francesco Schiavone was arrested, after five years on the run. In his hideout, a secret bunker in his Naples villa, police found a library dedicated to his idol Napoleon and various paintings made by the boss. The Casalesi clan is vey active in the waste business; Francesco Cicciott' e Mezzanotte Bidognetti (picture on the right) is a powerhouse in the sector. His nephew Gaetano Cerci is believed to be the key link between the clan and Licio Gelli, head of the former masonic lodge P2. The Bidognetti and Tavoletta families are very strong in the northern towns of Caserta province. They operate several illigal dumps between Napels and Caserta. Tonnes of dangerous waste from northern and central Italy was planted in the dumps, as well as toxic wastes from factories, hospitals and cemetries.

In October 2003 Bidognetti and his son Aniello were indicted for the murder of doctor Gennaro Falco in the town of Parete. Two weeks later capo Sebastiano Caterino and Umberto De Falco were murdered. Finally in June Francesco Schiavone and 15 other Casalesi bosses (including Bidognetti) were convicted to life in prison. The Spartacus trial, one of the biggest mafia trials in Italian history, involved the investigation of 1,300 people and the testimony of 500 witnesses (including 20 turncoats). Four bosses became fugitives among them Antonio Iovine and Michele Zagaria, the powerful capo of Casapesenna. In the months running up to the court deliberations several gangsters or their relatives have been killed. The brother of Mario Iovine was shot to dead in January.

Michele Iovine (picture on the left) drove his car in Caserta Nord, he just got out of jail after eleven years for extortion and other crimes. In May Umberto Bidognetti died in a hail of bullets in the small town of Castel Volturno. The victim, father of a turncoat and uncle of boss Francesco Bidognetti, had refused police protection. The murders are part of the strategy of Iovine and Zagaria, which is trying to dissuade those who wish to collaborate with law enforcement.

However police have recently stepped up efforts to dismantle the clan, Iovine's girlfriend and brother Giuseppe were arrested. Giuseppe Iovine was fired from the traffic police in 1995 for his mafia connections, but in 2007 gangsters have been discovered holding meetings in the police station of San Cipriano. They used the station phone and snorted cocaine in the command post. Another succes for the police came in July, they tracked down Domenico Vargas to a hideout near Castel Volturno. Vargas a killer is suspected of two murders in recent months. Investigators suspect Antonio's ability to evade arrest is thanks in part to mafia infiltration of local govenment, the Casalesi clan controlled elections for decades.