The Drug Game: Getting high on cocaine and money 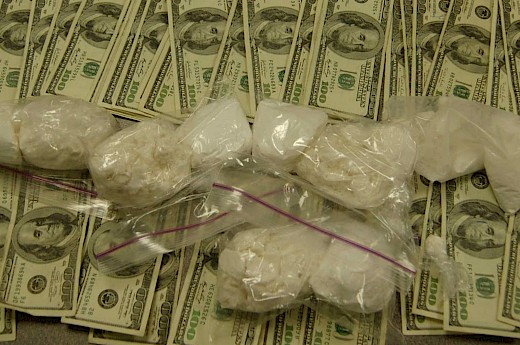 Cocaine comes from a natural plant grown deep in the jungles of South America. To bear fruit, farmers plant the plant that make cocaine; then the plant is picked and processed for distribution. The shimmering white colored powder cross over transnational borders and eventually find its way around the world where hordes of users sniffed it up into someone's sniffing nose or shot into a user's veins. Cocaine can either make you poor and weak, make you do the unimaginable, make you wealthy--or it can even take your mind on weird trips. As Rock Star singer Rick James once said, "Cocaine is one helluva drug." 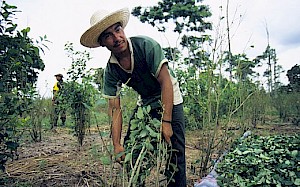 But it is no secret that selling cocaine on a grand scale can bring filthy riches to a player in the dope game.

Cocaine prices vary but profits are enormous for a heavy hitter depending where the dope is sold. Narcotic analysts explains that illegal drugs like and cocaine and heroin cost much less where it is produced. Worldwide, prices can range from $2 a gram in Panama to over $300 per gram in New Zealand.

According to U.S. law enforcement, Colombian national police, and Foreign narcotic experts, a wholesaler can buy a kilo of cocaine straight from the jungle in Colombia for approximately $2200.00. At Colombian ports, wholesale prices for a kilo of cocaine average between $5,500.oo, and $7,000.00. DEA (Drug Enforcement Administration) officials has reported over the years that cocaine prices increased exponentially once it leaves production and transferred to markets in the United States and foreign markets. Actually, as the report points out, the farther away, and the more isolated the drugs are from different countries the higher the cost for dealers and users. 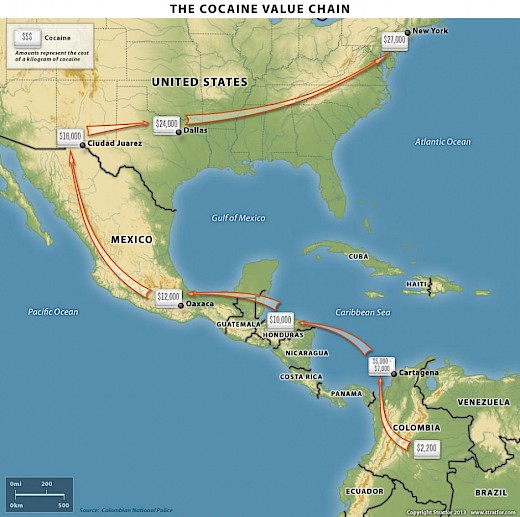 For example, Central America cocaine cost $10,000.00 per kilogram, and in Southern Mexico that same kilo sells for $12,000,00, unless a broker make an agreement to reduce the price based on multiple kilos of cocaine. Notice the much higher price between Central America and Mexico. After cocaine is transported into Mexico City area, a kilo is worth approximately $16,000.00 near the border town of Northern Mexico. Depending on the location in the U.S., wholesale on the streets average between $24,000.00, and $27,000.00.

Coca (a substance made from leaves that actually make cocaine) is one of the oldest, potent, most dangerous stimulants of natural origins. Australian world renowned psychoanalyst Sigmund Freud who once used cocaine himself became the first to publicly promote cocaine as a tonic to cure depression and sexual impotence.

Around 1886, the popularity of the drug got a higher boost when maverick John Pemberton mixed coca leaves as an ingredient in his new soft drink now known today as "Coca Cola". Effects from consumers sipping coke only skyrocketed Coca-Cola popularity during the 1900s.

Back during the 1600s, people chewed coca like tobacco. In the 1800s, cocaine earned the distinction as a popular mind altering substance to get high on among the upper-class people in Europe. If history correct, Pope Leo XIII gave papal endorsement to a coca-treated Bordeaux wine. During 1850s' an Italian neurologist named Paolo Manteganza, became so addicted to gnawing on coca leaves until he wrote excitedly about the effects.

"I sneered at the poor mortals condemned to live in this valley of tears while I, carried on the wings of two leaves of coca, went flying through the spaces of 77,438 words, each more splendid than the one before."

Cocaine was the most expensive from the 1960s until late 1980s. The Colombians, and Harlem drug dealer Frank Lucas, who was immortalized in the smash hit movie "American Gangster", were known to sell a kilo of cocaine in the United States for between $50.000 up to $75.000.00.

In La Paz Bolivia, Route 36 is the world's first cocaine lounge that stay open 24-7, a place where cocaine are sold to customers on a tray. Authorities say trying to stop cocaine tours and cocaine clubs in La Paz would be like trying to stop Americans from drinking alcohol during prohibition.

Although cocaine prices in the United States have considerably declined, depending on locations, there's still millions of users for ingenious dealers to pocket tons of money.

A new study conducted by Rand Corporation shows the use of cocaine dropped by half across United States from 2000 to 2010, while marijuana use increased by more than 30 percent during this period. In a March 2014 article published in Science Daily, Rand researchers estimated that drug users in the United States spent over $100 billion dollars annually on cocaine, heroin, marijuana, and meth, throughout this past decade. Science Daily article further reported, "while much more was spent on cocaine than on marijuana in 2000, the opposite proved true by 2010."

"Our analysis shows that Americans likely spent more than one trillion dollars on cocaine, marijuana and meth between 2000 and 2010," said Rand's co-director Beau Kilmer, the lead author for the study.

Cocaine use and cocaine trafficking has gained status as being Americanized as "Apple Pie." Despite worldwide awareness of its addictive nature and dangerous effects, capable of destroying human souls that often wind up in moral decay and death. In spite of its detrimental effects, dealers in the dope market still become wealthy off miserable souls. As long as people keep wanting to get "high" , drug abuse will remain a dominant force across the planet.

Map Source "Mexico's Cartels and the Economics of Cocaine is republished with permission of Stratfor."

YOUR INFORMATION IS WAY OFF YOU CAN BUY A KILO OF PURE BOLIVIAN FLAKE IN COSTA RICA FOR ANY WHERE BETWEEN $3,200 AND $4,500 I JUST LEFT THERE THE SHIT IS THE FUCKING BOMB ITS SO PURE WHEN YOU DROP IN THE SPOON AND ADD WATER YOU DON'T EVEN NEED TO USE COTTON TO DRAW IT UP, INJECT IT  GET NAKED AND GET YOUR FREAK ON OOOOOHHHHHH BBBBBBBAAAAAAABBBBBBBYYYYYY ROCKIN IN YOUR MOTHER FUCKING SOCKS