Christopher “Dudus” Coke controlled a state within a state on the poor west side of Kingston, Jamaica. He was the man who provided his underlings with free electricity. With schooling and food. He even provided them with the rule of law. His law. And when a drug lord like Coke lays down the law, there will be blood. Lots of it.

All parents want a better life for their children. Lester Lloyd Coke was no different. Growing up in the ghetto of Tivoli Gardens he lay the foundation for an extremely successful international business. A business that provided his family with the best food, clothing, education, and anything else that was the best money can buy. There was just one problem with Lester Coke’s business: It was illegal. 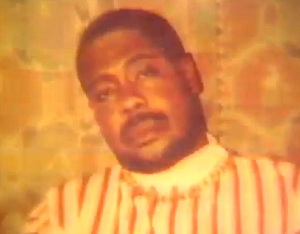 As founder and leader of the notorious Shower Posse, Coke (right) was one of the most powerful drug lords in the world. Named for its willingness to shower bullets on any crowd thought to contain an enemy, the Shower Posse made a big impression in the 1980s as its members set up shop in cities across the United States. Gang members sold drugs that were shipped to them from Jamaica and carved out their own territory in American neighborhoods. Their vicious and exotic ways were often exploited in action movies like Marked for Death with Steven Seagal and Predator 2 starring Danny Glover.

With the United States as his biggest market, Lester Lloyd Coke got rich very fast. Despite leading a violent gang that dealt drugs in cities all around the globe, Coke managed to enjoy his wealth and power in relative peace and quiet. The reason for this was simple.

The Politics of Power 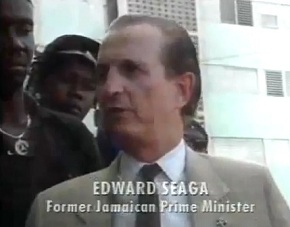 As members of the Shower Posse took firm control of the territory around them, they were able to dictate rules and laws to the residents who lived there. So when politician Edward Seaga needed votes to claim the post of Prime Minister of Jamaica, Coke was in a position to help. Much like Joseph Kennedy Sr. went to the Italian mob to persuade them to give his son the votes of organizations that fell under their control.

With the entire population of Tivoli Gardens, and thus their votes, under his control, Coke had an important ace up his sleeve when it came to dealing with politicians. Thanks to his powerful connections to Prime Minister Edward Seaga and his Jamaican Labor Party Coke could commit his crimes with impunity.

But when Seaga was voted out of office, Coke lost his protection and was arrested when the United States asked for his extradition so they could put him on trial for all the violence and drugs he shipped to the land of opportunity.

From Riches To Death

In 1992, life for the Coke family changed instantly. Jamaican police at their door, their lucrative business under intense pressure from the law, and their paterfamilias behind bars awaiting an unpleasant future in the United States. And things only got worse. Coke’s two sons, Mark and Christopher, had joined their father in the drug world. The violence of it all caught up with Mark, who was shot to death.

As Mark was laid to rest, his grieving father sat in his cell. No doubt contemplating how things got so out of hand. But the thoughts about the death of his son, and the hurt that fell upon his other family members, friends, and loved ones made place for thoughts about survival and death when a fire broke out in his prison cell. There is no information about who started the fire or why (it is alleged that Coke knew too much about Jamaican politicians and had to be silenced), but Lester Coke did not survive (photo below). He died on the same day as the funeral of his son Mark. Before the United States could ever bring him to justice. 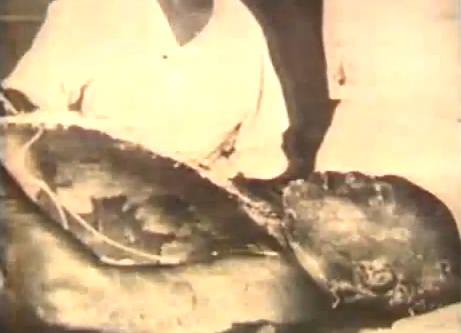 Having just buried his older brother and lost his father, Christopher Coke (below right) took place at the head of the besieged family empire. At the young age of twenty-three, he fought off rival groups that thought they could take advantage of the recent losses. Thrust into the leadership position, things seemed to come naturally for him. Having grown up in the family business no doubt played a part in that. As he consolidated his power it was as if Lester Coke had never died. Drug shipments to the United States continued and American guns and money were sent back to Jamaica to supply Coke’s Shower Posse, which, according to American prosecutors, also went by the name “The Presidential Click”.

In an excellent piece in The New Yorker Mattathias Schwartz writes: “Coke does not appear menacing—he is five feet four inches tall, with a round baby face—but his dominion in Tivoli Gardens was absolute. His organization, known to residents as “the system,” had its own penal process, including a jail, magistrates, and executioners. Coke’s code was simple—“No robbing, no raping, no killing”—and his justice stringent: teen-age thieves had one hand broken, rapists were beaten, anyone foolish enough to persistently dissent was exiled or killed. (…) Residents went to Coke for tuition, legal aid, business loans, food, and medicine. The rest of Kingston scrimped to afford Jamaica’s electricity rates—as much as twelve hundred U.S. dollars annually, in a country where the gross national income per capita is about seventy-five hundred dollars—whereas in Tivoli ninety-nine per cent of the electricity arrived free of charge.”

Just like his father before him, Christopher Coke received protection from the Jamaican Labor Party, now run by the new Prime Minister, Bruce Golding. While armed men guarded Tivoli Gardens, Coke had arrived at the same point his father had a decade earlier. Unfortunately for him, the similarities did not end there.

When The United States Comes A Knocking

With the war on terror getting most of the headlines it is easy to forget that the United States is still very much involved in another war. The one on drugs. And American President Barack Obama was not about to let the man described by Jamaica's former national security minister, Peter Philips, as probably the most powerful man in the country get away.

After intense pressure by the American government Jamaican authorities caved in and in May 2010 they announced they would extradite Coke to the United States. The announcement caused hell to break lose in Tivoli Gardens as members of the Shower Posse attacked police stations and a state of emergency was declared in Kingston.

While Coke was in hiding, hundreds of soldiers were deployed to help the police force raid Tivoli Gardens. They faced heavily armed Shower Posse members who were barricaded throughout the neighborhood. For several days the soldiers fought their way through the streets in search of Coke resulting in the deaths of over seventy people. Coke, meanwhile, had escaped. It would be four long weeks until he was finally captured.

A Life in His Father’s Shoes

Awaiting extradition to the United States in a Jamaican prison cell. It must have given Coke a feeling of déjà vu. The only things missing at that point were a funeral and a fire. But his story would take a slightly different turn than that of his father.

Because, unlike his father, Christopher did make it to the United States to stand trial on narcotics charges. With a star witness from his inner circle testifying against him and public opinion heavily influenced by media reports about the raid on Tivoli Gardens the odds were stacked against Coke.

His last name didn’t help either. Even a gangsta rapper would have decided that using the last name “Coke” as a rap nickname might be too much.

And, of course, the notorious man who gave him his last name was of no help either. As any parent Lester Coke wanted his kids to have it better than he had growing up in the Kingston ghetto. He succeeded in giving his children enough food, money, and an expensive roof over their heads. But he also brought them into a violent business. A business that cost him his own freedom and life, and the life of his children.

Depending on how you look at it, Coke does have it better than his father. Having not died in a mysterious fire, he sits in the Federal Correctional Institution in Edgefield, South Carolina, a medium security facility housing male offenders. At age 43 he is alive, and with his scheduled release set for 2030, he will probably be able to return to his beloved Tivoli Gardens when he has served his sentence.