What does the word “Mafia” bring to mind? Murder, car bombs, bootlegging and other devious crimes. The back alleys of Chicago and New York. Al Capone and John Gotti. What the word rarely brings to mind is Milwaukee. The Milwaukee Mafia: Mobsters in the Heartland will change that — Milwaukee, though smaller, had its streets flowing with blood and illicit booze.

Dozens of people were shot, stabbed and blown apart in the streets of Milwaukee, their bodies left to rot in the ditch until discovered by unsuspecting passersby. Milwaukee is internationally known as a beer capitol, and this hardly stopped in the 1920s just because alcohol became illegal. It was a drink many were willing to kill for.

In the pages that follow, you will be introduced to turn of the century Milwaukee, its underworld, and its first Mafia boss: Vito Guardalabene.

Guardalabene grew up in Santa Flavia, northern Sicily, in an era of unrest. His village was a crucial commercial center — nothing was imported or exported without going through the hands of dock workers. The local Mafia controlled the nearby orchards that supplied the world with grapefruit. One strike and the whole region could grind to a halt.

Sailing from Sicily to Milwaukee, Guardalabene also brought his trusted crew, who you will get to know better in my book:

Welcome to the world of the Milwaukee Mafia. Let’s turn back our calendars and let our story begin with a Gangsters Inc. exclusive!

The Balistrieri Family: From Milwaukee to Las Vegas 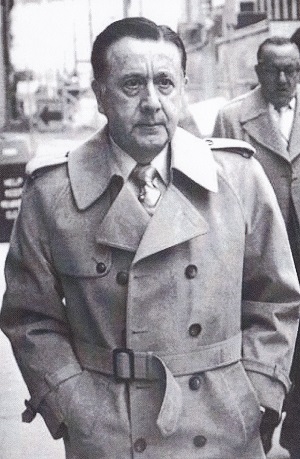 No single name is better identified with organized crime in Milwaukee than Balistrieri, especially Frank Balistrieri (right) who was head of the Family (big F) for an amazing three decades, from 1961-1993. There are some things that ought to be said about the Balistrieri family (small F).

One of the most common misconceptions from those living in Milwaukee is that there is some connection between the Mafia and the Sendik’s chain of grocery stores. There is not. Sendik’s is owned by a Balistreri, and the guys in the mob had the name Balistrieri. Note the spelling difference. Yes, if you trace their ancestry back in Sicily a couple hundred years, they are related… but you really have to go out of your way. (Heck, there are countless siblings and cousins of known mobsters who were not “in the life” — being related doesn’t mean anything!)

And the most common misconception for those who live outside of Milwaukee? They think that Milwaukee and Frank Balistrieri were small potatoes who amounted to nothing. Wrong, wrong, wrong. Yes, it’s true that Milwaukee never had the extreme level of mob activity that Chicago and New York did. But it should at the very least be considered on the level of Cleveland and Detroit, both of which are far better known.

Somewhere along the way, Milwaukee was written out of the history books and even more so out of the movies. In “Casino”, author Nicholas Pileggi says Frank Balistrieri was behind the bombing of Frank Rosenthal and ordered the murders of Marty Buccieri and Tamara Rand. In the movie “Casino”, the opening shot is of Rosenthal’s car exploding (although the name is changed to Sam Rothstein. Does Milwaukee get the blame? Nope. The word “Milwaukee” never gets mentioned once in the course of the film, completely cutting them out of the Las Vegas story.

In Joseph Pistone’s book “Donnie Brasco”, at least part of the book involves him and another agent (Gail Cobb) actually bringing the Balistrieri organization in Milwaukee to its knees. But the film, with Johnny Depp and Al Pacino? Strictly a New York story. (Still a great movie, but apparently Milwaukee wasn’t interesting enough to even get a mention.)

How many books have been written on Al Capone? Dozens, maybe more. A good portion of them will give passing mention to his rival Joseph Aiello. If nothing else, you might find a page or two about Aiello’s murder. What we haven’t seen yet is a book on Aiello himself, or Jack Zuta or Angelo Genna or most of the other Capone rivals. If we did, we would see Milwaukee playing a much larger role in the battle for Chicago. To a lesser extent, the Genna family had ties to Milwaukee. The Aiello family had strong alliances with Milwaukee, with marriage links and homeland connections (the Milwaukee Family and the Aiello crew both came from Bagheria in Sicily).

Absent from all history books, with the exception of “Milwaukee Mafia”, is a critical Capone / Aiello meeting that happened in a Milwaukee suburb in 1927. Negotiated by Pete Guardalabene, who was the boss of Milwaukee at the time, Joe Aiello and Al Capone sat down for dinner in the city of Pewaukee. The meeting house belonged to a pianist at Guardalabene’s Monte Carlo Club. Who all attended is not known and probably never will be, but the meeting was not a success. In an unusual twist, it ended not with bullets… but with both sides breaking out into a food fight. (Who won the food fight is open to debate!)

Let’s return to Milwaukee’s role in Las Vegas casinos. Of course, the mob had been mixed up with casinos since the 1940s, with Benjamin “Bugsy” Siegel and the Flamingo. But the Mafia can thank Milwaukee for getting them into the Stardust, the Hacienda, the Fremont and the Marina. The story is that San Diego real estate developer Allen Glick, head of Argent Corporation, was looking to invest in casinos, but did not have the money. So he turned to an outside source: his friend, Joseph Balistrieri (son of mob boss Frank Balistrieri). Some people have said Glick and Balistrieri met in college, though this doesn’t seem to be the case. Regardless, Joe Balistrieri (photo below) provided that crucial Mafia-Vegas link. 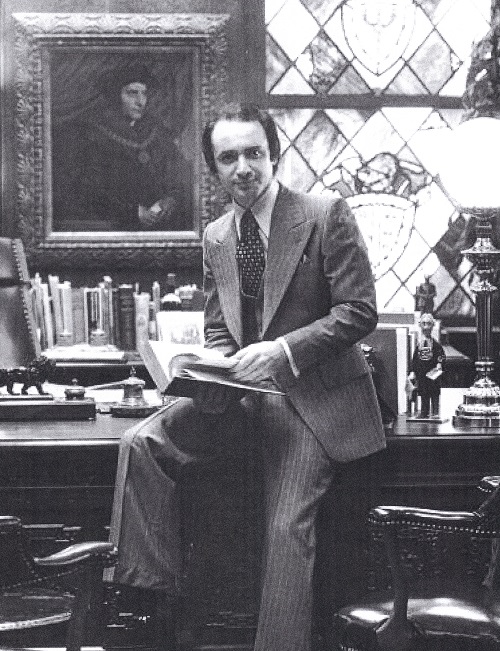 Joseph introduced Glick to his father, who had friends in the Teamsters. Particularly a Milwaukee Teamster named Frank Ranney, but also Allen Dorfman in Chicago. Ranney and Dorfman opened the Central States Pension Fund and gave Glick millions of dollars with his new friend Frank Balistrieri vouching for him. Joe Balistrieri got a finder’s fee, Glick got his casinos, and the Mafia now had another income source: the skim of these four casinos, especially the Stardust, where Chicago-Miami mobster Frank Rosenthal (see above) was installed as the manager. Like clockwork, Rocco Youse of Reno would pick up the skim and bring it back to Balistrieri. (Youse, incidentally, ran a chemical company called Del that sold “municipal chemicals” to cities and offered kickbacks to mayors and city purchasers. They would ultimately be shut down for this. The company’s attorney? Joseph Balistrieri. Even more telling, after Youse’s death, Milwaukee underboss Steve DiSalvo took over the company.)

What is the story with Allen Glick? We may never know. When the skimming operation came to light, Glick claimed ignorance and the government believed him. As shown in Pileggi’s book “Casino”, Glick claimed to be shocked when he was later confronted by Balistrieri and other mobsters for their cut. I’m not as convinced by Glick as the government was. He knew who to ask for the money. And it would be outrageously naive not to expect something in return for millions of dollars in loans, especially from organized crime figures. And then the Frank Rosenthal management issue. In “Casino” it is suggested that Rosenthal was kept on as manager despite being banned because Glick was threatened into it. While there may be some truth to this, if Glick was really concerned he could have stopped things much earlier or at least should have been aware that things were amiss. Something in here does not add up… could Glick really be that stupid?

Or perhaps Glick was really clever. He was able to use the Mafia and the Teamsters to fund his casino acquisitions. Despite the skimming operations, the casinos were still profitable and he was able to enjoy a comfortable lifestyle with a private jet and other luxuries. And then when the government came in, rounded up the mob and sent some of the biggest mob bosses to prison, Glick walked away smelling like a rose. No jail time, no fines to pay. He could sell off the casinos and come out the victor. 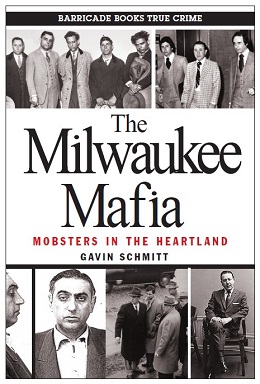 One other thing that makes Milwaukee interesting is how it was something of a hub or nexus for various mob families around the country. Milwaukee had plenty of connections in southern California, and ran a Wisconsin-California gambling operation with Andrew Lococo, a restaurant owner who had the world’s largest tuna fishing boat. The Bonanno Family had ties to Milwaukee: Joe Bonanno had a house in Phoenix next to Milwaukee mobster Salvatore Megna, and Bonanno also had an interest in the Grande Cheese Company. (The FBI and Sicilian authorities believed heroin was being smuggled in through Grande.) Pete Carlino, mob boss in Colorado, was in Milwaukee a week before his murder. Milwaukee underboss Steve DiSalvo ran an aluminum siding company in New Orleans in conjunction with Carlos Marcello. And so on and so on… the network was almost limitless.

Maybe this is a little rambling and jumps around a lot. But if nothing else, if you made it this far, just remember not to sell the Milwaukee Mafia short. They are not Chicago and they are not New York, but in their own way they are a crucial piece of Mafia history.

Gavin Schmitt is the author of The Milwaukee Mafia: Mobsters in the Heartland and has written this piece exclusively for Gangsters Inc. He also wrote Milwaukee Mafia (Images of America Series) in which he combined his own Milwaukee mob photographs with those from various historical societies, libraries, archives, and the personal collections of relatives, police officers, and federal agents. Most of the images contained in this book have never before been made public.