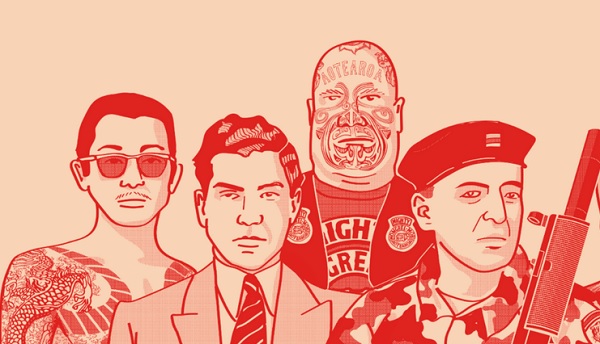 Journalists Danny Gold and Sean Williams have come face to face with some of the world’s most dangerous men – be they MS-13 hitmen or ISIS insurgents. They went wherever the story took them. As they reported on global violence, they also saw up close the impact of crime and corruption. In their new podcast they explore this seedy underworld. “The story of organized crime is the story of the modern world.”

When a big story popped up somewhere in the world, Gold and Williams tended to pack their bags and go there. No matter how inhospitable the area, they would find a way to cover it and the story that was stashed away there. Despite all these travels, the two never met. And unbeknownst to the other, they were both planning a trip to Yemen to report on the violence ripping through that country when fate kept them grounded. Before they could get on a plane, COVID-19 hit and spread around the globe, locking down cities and countries.

Rather than sit still, Gold and Williams plotted their next project. “We were surprised there was no podcast covering organized crime in this format,” Williams tells Gangsters Inc. “So we set it up and it’s worked out great so far.” In The Underworld Podcast they cover some of the biggest crime bosses in the world - from Moscow to Berlin and from Japan to the United States.

After spending years researching corruption and organized crime groups, Williams is struck by the similarities in their history. Williams: “Marginalized ethnic or religious groups, bought cops, a lazy or badly-funded judiciary. What makes each story different is how each gang springs up out of the peculiarities of its country. The Russian mob in Brooklyn prospered because Soviet Jews fleeing communism had been hustling the black market for decades. Nigerian cultists were co-opted by corrupt post-colonial dictators. The story of organized crime is the story of the modern world.”

People tend to glamorize gangsters and their lifestyle, yet the reality is anything but and a lot grimier, something Gold and Williams hope to show by pointing out all the facts: “By digging into the history and showing how these things actually happen. It’s not just a bunch of psychos with .22s, though it is sometimes that too. I don’t think we sugar coat anything either. [Serbian crime boss-turned-warlord] Arkan is a fascinating character. But he’s a genocidal maniac too, and we don’t leave anything to the imagination when it comes to his crimes.”

Despite the horrors, organized crime has no shortage of new recruits. What attracts people to this world? “Attracted might not be the right word,” Williams says. “Drawn? Sure. Who doesn’t want more money, clout, respect in a world that demands these things? Maybe some people like good suits. Others like cars. Trust-fund bankers get this shit for free every day. Others get born into nothing and struggle. No wonder the crime world entices them in. The world isn’t fair, right? If that’s the case why play by the rules?”

Stopping the constant emergence of new crime groups is an almost impossible task - like the eternal War on Drugs. Still, after spending years covering this topic at locations around the globe, do Gold and Williams have any ideas?  “How long do you want that answer to be?” Williams sighs.

Then, after giving it some thought: “Depending on who you ask it could be leftwing welfare, free market idealism, globalism, protectionism, patriotism, communism...if you find the answer let us know. But looking after marginal communities, rather than outcasting them, seems a decent start.”

Key to that is gaining an understanding of the world these people grow up and live in. Gold and Williams hope to achieve this with The Underworld Podcast in which they cover a different gang, boss or warlord each week, charting their route to infamy and the systems that allowed them to flourish.

Though COVID-19 continues to hinder travel, Gold and Williams have big plans for the future. “Both of us love reporting in the field, so we’re planning some documentary-style reported episodes soon,” Williams says. “It’s in our nature. We’ve also got some fascinating interviews under our belt. Maybe we take Underworld out on the road? That’d be cool. But we love what we’re doing now too. It’s fun and every story is gripping.”

Check out The Underworld Podcast here and listen to it on Soundcloud, iTunes or Spotify. Also check them out on social media.