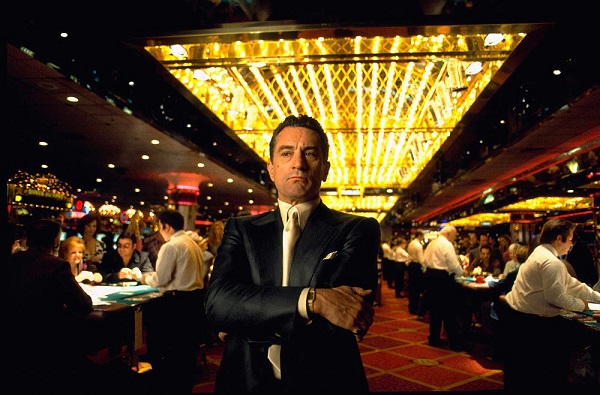 When it comes to epic mob movies director Martin Scorsese outdid himself with Casino. It tells the true story of Frank “Lefty” Rosenthal and Anthony “The Ant” Spilotro and how the Chicago Outfit dominated gambling in Las Vegas and is based on the research and eventual book Casino: Love and Honor in Las Vegas by Nicholas Pileggi.

In the movie the names have been changed. Lefty Rosenthal turned into Sam “Ace” Rothstein while Spilotro was now named Nicky Santoro. Thankfully their actions remained the same and the acting of Robert De Niro as Rothstein and Joe Pesci as Santoro is, as you can expect from these two stars, top notch.

Where Scorsese had shown the gritty streets of New York City mob life in Goodfellas, in Casino he upped the ante and showed us the glamorous lives of the men who controlled a billion dollar industry. And, “how [they] messed it all up.”

The true story of Casino was featured in several Gangsters Inc. stories. Most dealing with the individual players or certain incidents more than with the exact plot of the movie. The men responsible for the Las Vegas skim and the money from the Teamsters were bosses Antonino “Joe Batters” Accardo and Joseph Aiuppa, while capo Joseph “The Clown” Lombardo saw to it their orders were carried out as commanded. We have profiled them all.

Spilotro was sent to Vegas to oversee the skim at the casino. He had made a name for himself back in Chicago after learning the ropes from “Mad Sam” DeStefano, one of the most evil mobsters ever to walk the streets of Chi Town.

All in all the violence portrayed in Casino did a good job at showing the capabilities of the group of stone cold killers the real Chicago Outfit had at its disposal. Like when Chicago boss Antonino Accardo needed to send a message to some guys wo burglarized his home.

In the movie Scorsese even cast real mob killer Frank Cullotta to play, essentially, himself as he shoots his way through the final scenes of the movie.