The Uneasy Accord of a Mobster and a Cop in Cleveland, Ohio in the 1970s: “Bomb City, USA” 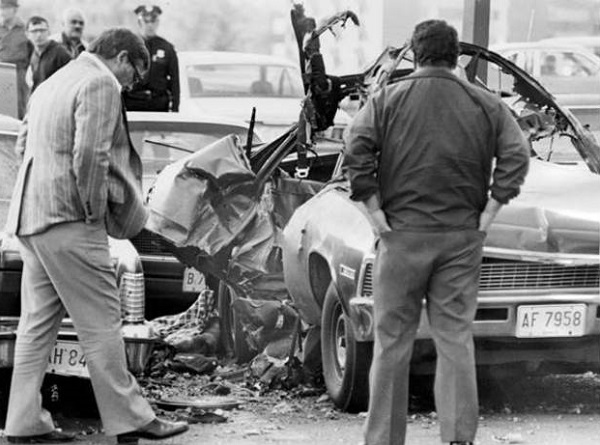 By the 1970s, Cleveland’s once-powerful underworld was merely a shadow of itself. Just 20 years earlier, the city’s Mafia was a thriving enterprise, with up to 60 made (formally inducted) men involved in loansharking, gambling and union rackets.

The dwindling of the Cleveland family had occurred primarily because longtime mob boss John Scalish had little interest in recruiting new soldiers. Scalish and his cohorts didn’t have a pressing need to build the family’s ranks. They had a solid and lucrative hold on the city’s criminal activities. They also had a steady revenue stream from their investments in Las Vegas casinos, made primarily through Mafia-influenced loans from the Teamsters Central States Pension Fund. Every month, the Cleveland mob and other Midwestern Mafia families received up to $10,000 each in money skimmed from the casinos. Scalish, who ruled the Cleveland mob from 1944 until his death in 1976, passed without grooming a replacement. The leadership void sparked a violent power struggle between heir apparent James Licavoli (nicknamed Jack White as an ironic play on his dark complexion) and a brash former boxer and longshoreman named Danny Greene (photo on the right). Proud of his Irish ancestry, Greene read extensively about Ireland and its turbulent history. Associates recalled that Greene came to view himself as a “Celtic warrior.” In the 1960s, Greene muscled his way into the leadership of the Cleveland’s longshoreman’s union. Soon after taking office as president, Greene had his office walls painted green and installed emerald green carpeting. He even drove a green car, wore green jackets, and handed out green ink pens.

Greene grew up poor in Cleveland, attending Catholic grade school, where he excelled in sports and neglected his academics. He was suspended frequently from school for fighting, most often with Italian-American students who attempted to bully him. As a result of his childhood experiences, Greene was said to harbor a lifelong dislike of Italians. However, Greene was a pragmatist in business affairs and he formed collaborations with several Italian mobsters. In his war with Licavoli, Greene found an ally in John Nardi, a Mafia associate who had leadership ambitions.

For both Licavoli and Greene, the weapon of choice was car bombing. During the mid-1970s, nearly 40 explosions were linked to their power struggle. In 1976, FBI statistics showed that Cleveland was the most bombed city in the nation. National media dubbed Cleveland “Bomb City, U.S.A.” and the Federal Bureau of Alcohol, Tobacco, Firearms, and Explosives tripled its staffing in northeast Ohio in order to handle bomb investigations.

No direct attempts were made on Licavoli’s life, but many of his associates were killed. The spate of murders in Cleveland attracted the attention of organized crime families throughout the U.S. The leaders of New York’s Genovese family and the Chicago Outfit offered assistance to Licavoli, but he declined any help. Licavoli realized that if he accepted help from the other families, he would be providing them a foothold to move into Cleveland’s rackets.

Licavoli fought a pitched battle against Greene and Nardi, with both sides sustaining heavy losses. In May 1977, Nardi lost his life in a car bomb explosion masterminded by mobster Curly Montana and an associate. Greene proved a more elusive target. Licavoli’s soldiers attempted to kill Greene on at least eight occasions. After each unsuccessful effort, Greene became increasingly emboldened.

In those years, Ed Kovacic, a sergeant with the Cleveland Division of Police, headed a 10-person team that investigated organized crime activities in the city. Kovacic, who passed away recently, began his police career in 1959 and would eventually serve as the city’s police chief from 1990 to 1993. Throughout his career, Kovacic was known for his unwavering integrity.

In the early 1970s, Cleveland Police were plagued with pockets of corruption. The department’s homicide detectives, in particular, were notoriously susceptible to bribes.

Kovacic served a stint in the Detective Bureau during one of the unit’s darkest periods. “From my first days in Detectives, I didn’t get along with anyone because I could see that many of the detectives were pretty corrupt and I wasn’t,” said Kovacic during a 2014 interview. “The guys didn’t like me because I was honest. I wouldn’t take a nickel.”

Kovacic recalled arresting the nephew of a Cleveland Police commander. “The nephew had raped a 12-year-old retarded girl. I built a strong case against him. Then an attorney came up to me and said, ‘Ed, it’s worth 250 bucks if you just sit and say nothing. The case will go away and you’ll get paid.’”

After Kovacic declined the bribe, the rape case was torpedoed by higher-ups and the suspect was released. “It drove me nuts,” said Kovacic. “In the Detective Bureau, I had no control of what was going on around me. Strange things could happen to a case.”

With Kovacic proving untouchable to bribes and intimidation, his investigations into mob activities became a concern for both the Licavoli and Greene camps.

“Oh, I had quite a few people threaten me,” said Kovacic. “But I was never afraid, even when I heard that Danny Greene had put out the word that he was going to blow up my car. However, I did start putting scotch-tape on the doors, hood, and trunk. I would check the tape every morning before I got in the car. And I never let my kids start their cars. I did it for them.”

One day, Greene sent an emissary to tell Kovacic that there hadn’t been a contract on his life. “The guy told me that Danny wasn’t really upset with me and that they would never harm a cop. But I still put tape on my car just as a precaution. Several days later, I was driving my car and I noticed the scotch-tape was flapping in the breeze. I had a second of panic and I thought, ‘You son of a bitch, Greene, you got me. Where is the bomb? Will it go off when I reach a certain speed?’”

Kovacic then remembered that he had taken his car to a mechanic that morning to have the oil changed. The tape had most likely loosened when the mechanic raised the hood.

Kovacic eventually developed a working relationship with Greene, even admitting to an amused respect for the cocksure Irishman.

Greene’s luck ran out October 6, 1977, after a visit to his dentist. As he approached his Lincoln Continental, he was ripped apart by a remote-detonated bomb that had been placed in a car next to his. A police report noted that Greene’s left arm was torn off and thrown 100 feet from his body. Greene’s life and death were recounted in the 2011 movie, “Kill the Irishman.”

In the aftermath of Greene’s death, several higher-ups in the Cleveland mob were incarcerated, including Licavoli. The Cleveland family, now rudderless, was teetering on the brink of extinction.

Robert Sberna is a Cleveland-based journalist and the author of House of Horrors, Badge 387, and The Mystery of the Lufthansa Airlines Heist. You can visit his website at www.robertsberna.com