Organized crime groups the world over have learned many lessons throughout their long and bloody history. Lessons that, in some cases, led to rules to live by. But in the criminal world rules are made to be broken. So despite the fact that the Sicilian Mafia was decimated after it had decided to take on the Italian government and after Pablo Escobar lay dead on a roof in Colombia cause he felt he was the country’s president, some groups still think it is smart to take on the state. Only to find out later, what a huge mistake they made.

The Barrio Azteca (BA) gang from El Paso, Texas, wanted to play with the big boys and formed an alliance with the Juarez drug cartel. It expanded its drug trafficking operations and upped the violence. Which in a Mexico plagued by a vicious drug war that costs thousands of lives each year means going from regular corpses - gang rivals, snitches, innocent bystanders – to so-called “excellent cadavers” as the Italians labeled the dead politicians, police officers, journalists, and judges that were butchered by Cosa Nostra.

On Saturday afternoon, in broad daylight, Jorge Alberto Salcido Ceniceros (37), a Mexican citizen who worked at the American consulate, was shot to death in his car, while his two children, ages 4 and 7, were wounded.

Ten minutes later, Leslie Ann Enriquez Catton and her husband Arthur Redelfs were shot to death in their car near the Santa Fe International bridge linking Ciudad Juarez with El Paso, Texas. Leslie Ann was shot in the head, while her husband suffered bullet wounds in his neck and arm. Their baby was found unharmed in the back seat.

The murders caused outrage all the way into the Oval Office of the White House where President Obama denounced the “brutal murders” and vowed to “work tirelessly” with Mexican law enforcement officials to prosecute the killers. Secretary of State Hillary Rodham Clinton said the killings underscored the need to work with the Mexican government “to cripple the influence of trafficking organizations at work in Mexico.”

President Felipe Calderón of Mexico similarly expressed his indignation and condolences and said he would press forward with “all available resources” to control the lawlessness in Ciudad Juárez and the rest of the country, the New York Times reported.

The Cartels took on the most powerful government in the world and had awoken a beast. Two years later, the U.S. government is well on its way to imprisoning those it holds responsible for these brutal murders, namely the leaders and members of the Barrio Azteca gang.

According to court documents and information presented in court, the Barrio Azteca is a violent street and prison gang that began in the late 1980s and expanded into a transnational criminal organization. In the 2000s, the BA formed an alliance in Mexico with “La Linea,” which is part of the Juarez Drug Cartel (also known as the Vincente Carrillo Fuentes Drug Cartel or “VCF”). The purpose of the BA-La Linea alliance was to battle the Chapo Guzman Cartel and its allies for control of the drug trafficking routes through Juarez and Chihuahua. The drug routes through Juarez, known as the Juarez Plaza, are important to drug trafficking organizations because they are a principal illicit drug trafficking conduit into the United States.

The gang has a militaristic command structure and includes captains, lieutenants, sergeants and soldiers – all with the purpose of maintaining power and enriching its members and associates through drug trafficking, money laundering, extortion, intimidation, violence, threats of violence and murder. 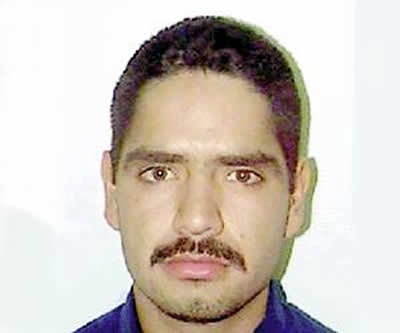 After the triple murder in March of 2010, the gang was hunted down one by one. Two years after the murders, Cartel leader Jose Antonio Acosta-Hernandez (34), aka “Diego,” “Dienton,” “Diez” and “Bablazo,” of Chihuahua, Mexico was extradited to the United States to face American judgment.

The leader of the La Linea gang pleaded guilty to four counts of racketeering, narcotics trafficking and money laundering, and also pleaded guilty to seven counts of murder and weapons charges, which specifically related to the triple homicide in Juarez of U.S. Consulate employee Leslie Enriquez, her husband Arthur Redelfs and Jorge Salcido Ceniceros, the husband of another U.S. Consulate employee. Immediately after the guilty plea hearing, Acosta-Hernandez was sentenced to seven concurrent life terms, three additional consecutive life terms and 20 years in federal prison.

Hit silly with these long sentences, Acosta-Hernandez acknowledged that Salcido, Enriquez and Redelfs were murdered by members and associates of the Barrio Azteca to further the gang’s racketeering activities. Acosta-Hernandez admitted that at the time, under his leadership as boss of La Linea, which provided muscle and hit men for the Juarez cartel, he coordinated the enforcement actions with the Barrio Azteca in Juarez. La Linea and the BA had agreed to unite and commit murders to further their criminal enterprise. Acosta Hernandez admitted to having ordered 1,500 murders.

Acosta-Hernandez is not the only BA member who’s looking at life in the U.S. penal system. Arturo Gallegos Castrellon, aka “Benny,” one of the alleged participants in this triple murder case was extradited to the U.S. on June 28 to stand trial. If convicted, Gallegos Castrellon faces a maximum penalty of life in prison.

As Gallegos-Castrellon arrived in chains, another leader and two soldiers in the Barrio Azteca were sentenced to life, 30 and 20 years in prison.

According to court documents and information presented in court, Galindo was a top Lieutenant in the BA. While incarcerated in the Texas Department of Corrections, he served as the right hand man to BA Captain Manuel Cardoza. In that role, Galindo maintained communication with other BA Captains and Lieutenants in the United States and Mexico and was specifically in charge of BA operations in Texas. Evidence was presented that Gonzales and Garcia were BA soldiers, whose duties included distributing drugs, picking up money from dealers and enforcement operations within their area of responsibility. 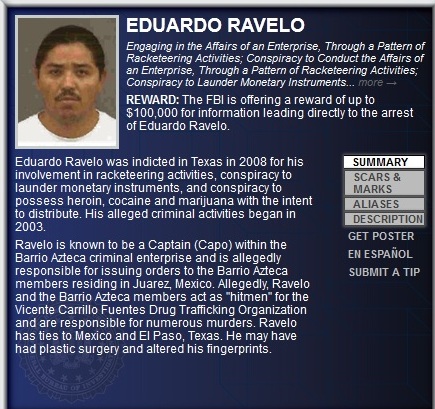 A total of 35 Barrio Azteca members and associates based in the United States and Mexico were charged in the third superseding indictment for allegedly committing various criminal acts, including racketeering, narcotics distribution and importation, retaliation against informants, extortion, money laundering, obstruction of justice and murder, including the 2010 Juarez consulate murders. Of the 35 defendants charged, 33 have been apprehended, including April Cardoza, who was found in Juarez, Mexico, last week. Twenty-four of those defendants have pleaded guilty, one defendant committed suicide while imprisoned during his trial and six others are pending extradition from Mexico. U.S. and Mexican law enforcement are actively seeking to apprehend the two remaining fugitives in this case, including Luis Mendez and Eduardo Ravelo, an FBI Top Ten Most Wanted Fugitive.

The sentencing marks the closure of the case against the U.S.-based defendants charged in the superseding indictment. Twenty-one of 22 U.S.-based defendants have pleaded guilty and have been sentenced, including another Barrio Azteca Lieutenant Roberto Angel Cardona, who was also sentenced to life by Judge Cardone on Feb. 17, 2012. The remaining U.S.-based defendant, Ramon Renteria, aka “Spooky,” took his own life while in prison during his trial. Witnesses testified that Renteria was a Captain, the highest rank of the Barrio Azteca, and the only U.S.-based Captain not currently serving a life sentence in prison.

With murdering members of the government comes a lot of heat. It is a lesson many crime groups learn or have learned in the past century. Still, every decade a group rises up from the underworld thinking it has achieved enough wealth and power to challenge the state. Only to find out that ruling the criminal underworld of a country isn’t quite the same thing as ruling an entire nation.

Comment by Richard Rios on July 3, 2012 at 12:59am
Excellent overview of how powerful a countrys government can be when it commits the full breadth of its judicial might upon the unbridled savagery of drug cartels.

Thank you, Richard! On the various online message boards dealing with organized crime there will always be those people who believe in the myth of a criminal organization that has more power than a government. And some organized crime groups will actually believe it as well. In the end it is always clear which party is still standing. Let's hope the Mexican and US governments can get the drug war in Mexico under control. So many lives lost in that mess.

Comment by Richard Rios on July 3, 2012 at 7:45am
Thank you. Keep these great articles coming.