UFC champion Conor McGregor is one of the best fighters on the planet. A man who talks a big game and backs it up with his fists. Going by the nickname “The Notorious,” McGregor likes to use references to gangster culture to get his points across. Where does his fascination with gangsters come from? And what about his links to real mobsters in his home country of Ireland?

As he rose to prominence in the Ultimate Fighting Championship (UFC) the premier organization in Mixed Martial Arts (MMA), McGregor vowed to “not just take part” in the fight game, but “to take over.”

He’s kept his promise, knocking out UFC featherweight champion Jose Aldo – a man who was undefeated for over a decade – in just 13 seconds and breaking pay-per-view records with each event he headlined.

Throughout his fight career, McGregor has made frequent references to gangster culture. Either by imitating the lifestyle and appearance or labeling his opponents in a degrading way, as he did with Nate Diaz, who he called a “little cholo gangster from the hood.”

But, he added, “At the same time he coaches kids’ jiu-jitsu on a Sunday morning and goes on bike rides with the elderly. He makes gang signs with the right hand and animal balloons with the left hand. You’re a credit to the community.”

If Diaz is a “cholo gangster from the hood” then McGregor is a globetrotting gangster. As his Instagram account shows, McGregor takes a little something from everyone. Even from the Mexican style he accused Diaz of. 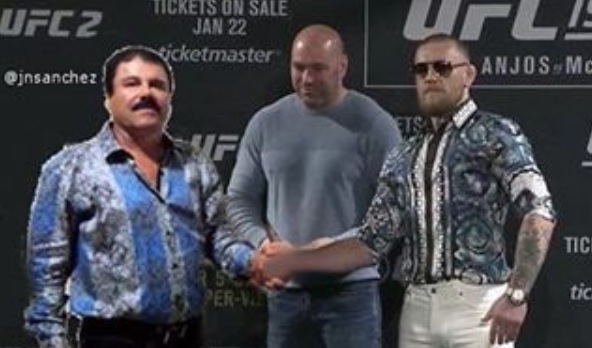 When he faced off (then) UFC lightweight champion Rafael Dos Anjos in January of this year, McGregor could be seen wearing a blouse of the same style as that of Mexican drug lord Joaquin “El Chapo” Guzman. For those missing the reference, McGregor even made it obvious by posing the same way as El Chapo did in his photo with actor Sean Penn after their infamous interview for Rolling Stone magazine.

And for those who were still in the dark as to what just occurred, McGregor made it crystal clear on his Instagram page where he shared photos of the face-off with the captions “El Chapo Jr.” and “Keeping up with the Guzmans.”

Besides being well-versed in the ways of Mexican gang and narco culture, he also knows his pop culture. He can be seen posing in his bathrobe underneath a chandelier holding a large gun. He captioned the photo: “You need people like me,” a reference to the line from Scarface, the movie about the rise and fall of a Cuban-American drug lord, starring Al Pacino. 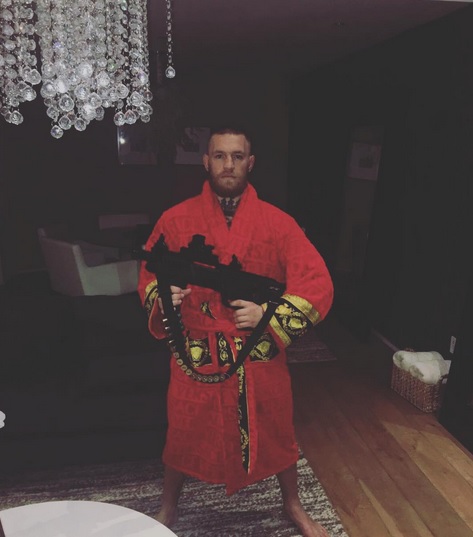 For a man like McGregor, gangsters set the bar when it comes to dominating a business by any means necessary. It is clear why someone who claims to be here to “take over” the fight game likes their attitude and exhibits it when he can.

He even merged his comment with the gangster example in the photo below that he shared on his Instagram with the caption: “Put the fight game in the bag and step away from the vehicle.” 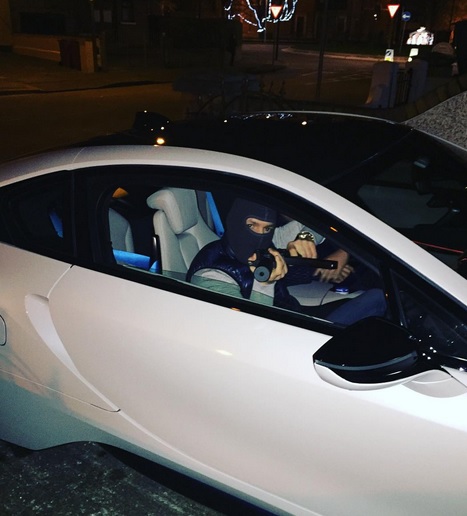 Fighters and gangsters have had a strong bond ever since the inception of the sport. Whether boxers or MMA-fighters doesn’t matter. Gangsters and fighters have circled each other, sharing a mutual respect for each other’s power.

Also, they offer each other business opportunities.

Many mob bosses look for new talent to strengthen their ranks of enforcers and fighters are on the top of the draft list. Many of the sport’s most talented fighters have seen their careers derailed by criminal acts on behest of gangsters.

When you are making a few hundred bucks on one fight, the shady money can be very tempting. Especially when gangsters make it sound so easy. “You just have to stand there and look tough,” “Just carry this bag from point A to point B,” “Just slap this guy around a little bit.” Easy money, no worries.

Of course, there’s no such thing as easy money. Many fighters found out the hard way that despite their physical prowess and skills in the ring, they are not bulletproof. 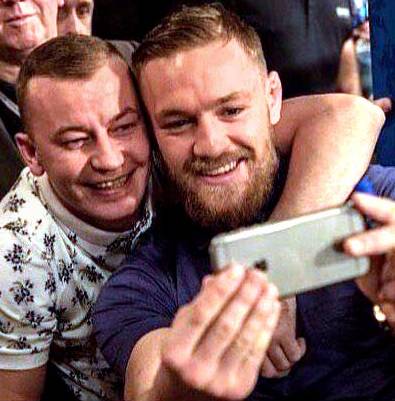 With McGregor showing off the pop side of gangster culture, what about his alleged links to real gangsters in his home country of Ireland? Well, as with most fighters, the Dublin gym where McGregor trained was also frequented by several real life notorious gangland figures and their offspring. Several of them even traveled all the way to Las Vegas to support their countryman during his fight against Aldo.

Among the group was David Byrne, a career criminal and member of the gang headed by boss Christy Kinahan. Byrne and McGregor posed for a selfie at one point, which can be seen on the right. Byrne’s brother Liam is alleged to be a key player in the Kinahan gang involved in largescale drug and weapon smuggling.

David Byrne was murdered at a boxing weigh-in at the Regency Hotel in Dublin on February 5, 2016. As people mingled and the room buzzed with anticipation of the upcoming WBO lightweight title fight between homegrown hero Jamie Kavanagh and Antonio Jao Bento, four attackers, two of whom were disguised as members of an Irish Police Emergency Response Unit, armed with AK-47s, entered the room and fired shots. Their suspected target was the son of mob boss Kinahan, but he managed to survive, while Byrne was shot to death.

Jamie Kavanagh, the boxing great who’s weigh-in turned into a bloody crime scene, himself has lost his father and uncle to the same Dublin gang war. His dad was shot to death in September 2014 at an Irish bar in Marbella, Spain, while his uncle Paul was murdered in Dublin in March 2015.

Conor McGregor is friends with the Kavanaghs as well, having grown up with them in the same neighborhood in Dublin and trained with them at the same gyms. He was present at Paul Kavanaghs funeral and could be seen among the hundreds of mourners that showed up to pay their respects. While McGregor may use gangster references to poke fun at a situation or as a way to show his dominance over the fight game, he is all too familiar with the deadly violence that accompanies that lifestyle. That is why, as far as gangland links go, McGregor’s are purely based on friendships with guys from the neighborhood who took a different path than the one he took himself.

McGregor and his boxing friend Jamie Kavanagh are role models. They both chose fighting as a way out. Rather than dealing drugs, they deal in punches and kicks. Instead of cold blooded murder, they punch their opponents into a short unconscious spell.

If that isn’t gangster, then what is?