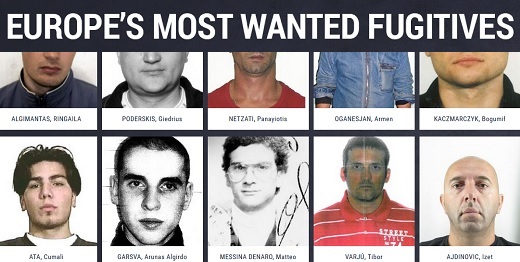 Have you seen Cosa Nostra boss of bosses Matteo Messina Denaro or French armed robber David Gras? Yes? Then go to EUMostWanted.eu and help European law enforcement agencies find and arrest these dangerous men so they can place some new mugshots on their Europe’s Most Wanted Fugitives website.

Launched by the European Network of Fugitive Active Search Teams, a network of police officers specialized in undertaking immediate action to locate and arrest fugitives, the website will share information on high-profile internationally-wanted criminals, convicted of - or suspected of having committed - serious crimes or terrorist acts in Europe.

The current list shows several of Europe’s most notorious gangsters. Chief among them Sicilian Mafia boss of bosses Matteo Messina Denaro. Already Italy’s most wanted fugitive, Messina Denaro (53) now faces heat from other European countries as well. He is wanted for “murder, grievous bodily injury, and participation in a criminal organization.”

Another one of Italy’s most wanted mob bosses also made the list. ‘Ndrangheta boss Ernesto Fazzalari (46) is wanted for the same criminal acts as his Sicilian colleague. Italian police have been searching for the Calabrian boss since the summer of 1996 and hope his placement on this list will help them in their quest for justice. 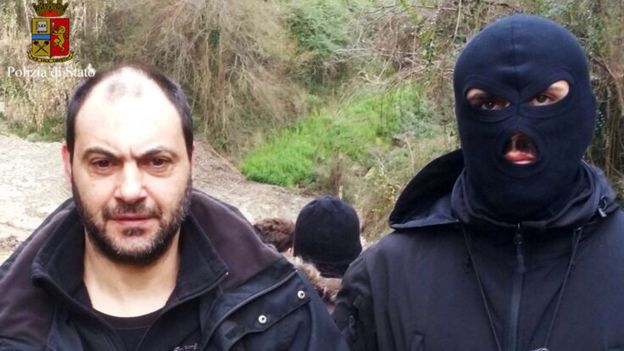 Today, Italian police showed that despite the fact that some fugitives have been on the run for over two decades, they will continue to hunt them down. In Calabria, authorities arrested two 'Ndrangheta bosses - photo above - who were hiding in a camouflaged bunker in a mountain in Reggio Calabria. Giuseppe Ferraro (47) had been on the run since 1998, while Giuseppe Crea (37) had only been on the lam since 2006. Both men were living in abysmal circumstances while they tried to evade the law and ran their criminal operations. Besides Italian Mafiosi, the list also features plenty of gangsters and criminals from other European countries.

French gangster David Gras (45) - photo right - is wanted for his involvement in a series of armed robberies on “armored cars or secured cash premises using stolen vehicles, explosives, and heavy weapons” that took place throughout France in 2011. During one such robbery in the city of Orly, the criminals used explosive devices which killed a security guard and wounded two other employees. They stole several millions euros and managed to escape by taking a hostage and opening fire on police forces.

Eastern Europe contributed a lot of names to the list. Men who were involved in extortion, drug trafficking, and murder. Among them 36-year-old Algimantas Ringaila (photo left), a gangster from Lithuania who is suspected of trafficking a very large quantity drugs while being a member of the armed criminal association “Agurkiniai.”

He is not the only criminal whose drug shipment got him in trouble. 49-year-old Zeljko Bojanic recruited an undercover agent to transport cocaine from South America to Europe aboard a yacht. Unsurprisingly, his mugshot can now be found at the Europe’s Most Wanted Fugitive website.

A website that, when we accessed it today, still had some issues. Some pages didn’t load or gave an error message. The URL placed in Europol’s press release did not work, while a link from another source did. It is paramount that these issues are solved quickly if law enforcement wants to receive help. Citizens in the European Union and beyond can provide useful information via the website, anonymously if preferred, but only if everything functions as planned.