What was Sean Penn’s role in the capture of El Chapo? 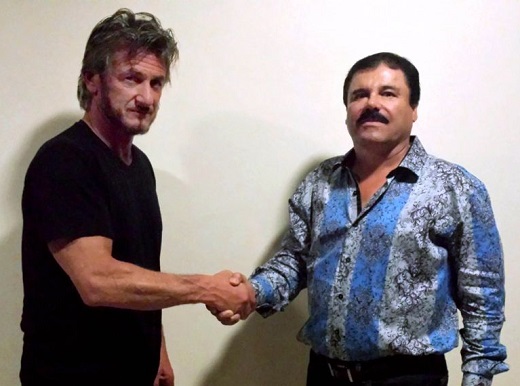 Just when you thought the story of Joaquin Guzman, Mexico’s top drug lord, couldn’t get any stranger, Hollywood’s bad boy and Academy Award-winning actor Sean Penn steps into the fold with an exclusive interview he had with El Chapo several months ago. Despite all of Guzman’s answers, the interview mainly raises questions. Among them, what exactly was Penn’s role in the recapture of El Chapo?

According to Mexican authorities, Penn played a big role in getting Guzman back in prison. “A Mexican official with knowledge of the hunt for Mr. Guzman said on Sunday that his meeting with Mr. Penn was being monitored,” The New York Times reported. “The official spoke on the condition of anonymity because the information is not public. Mexico’s attorney general said on Saturday that the authorities had been able to track down Mr. Guzman because he met with actors and producers to discuss making a film about his life,” the paper concludes.

And so it was that, unbeknownst to him, El Chapo’s recapture was already set in motion while he was still locked in his cell in a maximum security prison near Mexico City. Sitting on his bed, watched by guards, he received dozens of offers from bigtime Hollywood producers who wanted to make a movie about his notorious life. Though Guzman ignored these requests, they did stroke his ego.

So much so that once he managed to escape via an elaborate tunnel dug beneath his cell, he continued his back-and-forth with his fans in Hollywood. Guzman’s main contact was Mexican film and television star Kate del Castillo, who played a drug queen in Mexico's popular soap opera La Reina del Sur. He was interested in meeting her after she voiced her mistrust of the Mexican government and stated “that in a question of trust between governments and cartels, hers would go to El Chapo.” More importantly, he wanted her to be the person who would tell the story of his life on film.

This is where Sean Penn got involved via two mutual friends who came in contact with Del Castillo. “I learned of their intention to make the film,” Penn writes, using pseudonyms for his two friends, “but I did not know Kate or have any involvement with the project. [My two friends and Del Castillo] met with El Chapo's lawyer to explore their approach, but it was ultimately determined that direct access to El Chapo would still be too restricted for their authorized pursuit to rise above competitive “Chapo” projects that Hollywood would pursue with or without his participation.”

Despite not being involved in a possible movie deal, Penn was interested in writing a magazine story about Guzman. Del Castillo agreed to be the middlewoman between El Chapo and Penn and thus they embarked on a lengthy trip to a secret location in Mexico.

Penn describes this trip extensively in his article in Rolling Stone. From the moment he arrives in Mexico, he writes, “There is no question in my mind but that the DEA and the Mexican government are tracking our movements.”

Is this actor Sean Penn adding some thriller elements straight from a John Le Carré spy novel to his article – as he frequently did in his piece - or did he perhaps truly know he was being watched?

It’s worth asking because when Penn later meets El Chapo, face to face, he tells him that he “had a family member who worked with the Drug Enforcement Agency.” He continues to explain that, “through my work in Haiti (I'm CEO of J/P HRO, a nongovernmental organization based in Port-au-Prince) I had many relationships inside the United States government. I assure him that those relationships were by no means related to my interest in him. My only interest was to ask questions and deliver his responses, to be weighed by readers, whether in balance or contempt.”

Mexico’s most powerful drug lord believed him – or trusted middlewoman Del Castillo enough to believe Penn – and the pair, surrounded by over 100 armed bodyguards talked away deep into the night while drinking tequila together.

Around 4:00am, El Chapo said goodbye to his guests, and the next day Penn and company make the long trip home.

While Penn is safely at home, reports are surfacing that El Chapo’s road trip didn’t go as planned.

“According to media reports that didn't come until days later, a cellphone among his crew had been tracked," Penn writes. “From the time the military and the DEA moved in on them, the reports of what happened are conflicted. A source familiar with the cartel informed me on October 3rd that the initial siege had begun. That source and another on the ground in Sinaloa reported that over the next several days, two military helicopters were shot down and Mexican marine ground troops laid siege to several ranch properties.”

Penn then accuses the Mexican military of crimes against its own citizens. “There were additional reports that 13 Sinaloa communities had been ravaged with gunfire during simultaneous raids. La Comision Nacional de los Derechos Humanos (the National Commission for Human Rights) struggled to enter the area but were prohibited. Villagers protested their treatment by the military. By the time news agencies broadcast the story in the United States, the mayhem throughout Sinaloa in those days had been essentially reduced to a nearly successful raid that had surgically targeted only Chapo and his men, and claimed he had been injured in flight with face and leg wounds.”

But once again Guzman had managed to evade capture. As he was being hunted by Mexican Special Forces and the DEA, Guzman still took the time to chat with his number one middlewoman Kate del Castillo. Chat messages that were passed on to Penn, who writes, “El Chapo's own account would later be shared with me, through a Blackberry Messenger exchange he had with Kate. ‘On October 6th, there was an operation....Two helicopters and 6 Blackhawks began a confrontation upon their arrival. The marines dispersed throughout the farms. The families had to escape and abandon their homes with the fear of being killed. We still don't know how many dead in total.’ When asked about the reports of his own injuries, Chapo responded, ‘Not like they said. I only hurt my leg a little bit.’”

In the months ahead, El Chapo continued messaging Del Castillo and Penn, risky behavior that would lead to his recapture last Friday. A day later, Rolling Stone published Penn’s interview with El Chapo. An interview the drug lord had approved beforehand.

As we digest all of this, several things stand out.

Everything points at Penn as the one who – most likely - caused El Chapo’s capture. If true, then he has a lot to worry about.

Reading Penn’s interview, however, it seems that if he was involved, if he did play an integral part in the capture of the world’s most wanted drug lord, he would not have let the opportunity pass to brag about that or at least place some emphasis on it. Rather we can conclude, he unknowingly played a part in the capture of El Chapo.

The fact that the interview was published a day after Guzman’s arrest also raises questions. Why, if El Chapo had already given his final approval, did he wait until the drug kingpin was locked up again? Perhaps it was because if the interview was released while El Chapo was still on the run, U.S. authorities would’ve pressured Penn with all their might to get him to give up information that would lead to Guzman’s arrest.

Another thing that stands out – though not as factual as the other three points - is Penn’s self-imposed role as journalist. Throughout the article Penn claims he was never involved nor interested in making a movie about Guzman, opting for a magazine story instead. This despite the fact acting is his job and Guzman’s premier goal was seeing his story told by a big Hollywood studio.

As a journalist, Penn has a genuine motive for meeting Guzman and keeping that meeting secret from law enforcement agencies hunting the fugitive kingpin. Even now, he can claim he is protecting his sources. If he were meeting El Chapo as an actor or citizen, though, he had no such right.

Even Penn himself thinks as much, writing, “I take no pride in keeping secrets that may be perceived as protecting criminals. As an American citizen, I'm drawn to explore what may be inconsistent with the betrayals our government and media brand upon their declared enemies.”

Gangsters Inc. asked some of our sources in (federal) law enforcement whether Penn could face scrutiny from Justice in the United States for failing to inform them of El Chapo’s location or their meeting? “I don't think so,” one source tells us. “Unless he was interviewed by the Feds and denied any contact with him or meeting with him. That would be viewed as harboring a fugitive and lying to the Feds.”

Apart from the legalities of the meeting, another source speaks more of the ethics. “Morally, he should have turned him in for all the peddling of death that Chapo has done over the years,” he says. “But Penn is a liberal douche bag that doesn't comprehend or sees the evil soul of El Chapo.”

Coincidentally, we can pick Penn’s response to that straight from his Rolling Stone article, “I tried hard, folks. I really did. And reminded myself over and over of the incredible life loss, the devastation existing in all corners of the narco world.”

Evidently, the notorious drug lord wrapped Penn around his finger like a snake charmer does to a snake, “Chapo smiles a warm smile,” Penn writes. “In fact, in what would be a seven-hour sit-down, I saw him without that smile only in brief flashes. As has been said of many notorious men, he has an indisputable charisma.”

Get the latest news first at the Gangsters Inc. news section.

I am not sure if all that mr. Penn has written is as close to the truth as he would like the public to believe, however mr Penn , in the event (and I hope this never happens) you are woken up some night and someone is holding his hand over your mouth with a straight razor in his free hand try not to piss your pajamas, what you are claiming you did is not like shooting at a helicopter buzzing your wedding tyou are taking credit for putting a very powerful man in prison for thr rest of his life, I really think you forgot that you are only an actor and if any of El Chapos underlings come for you there will not be someone there to yell CUT. Good Luck dummy