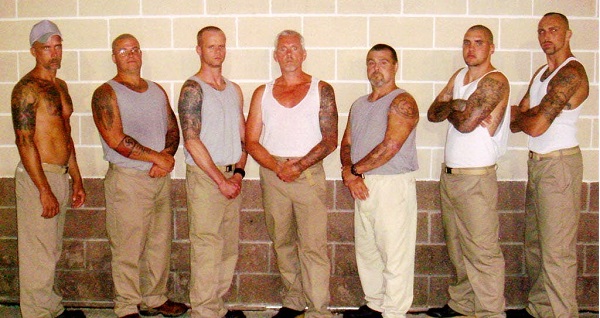 Two federal inmates convicted of killing another inmate at a Beaumont Prison in Texas were sentenced to death on Wednesday. Both the two murderers and the victim were members of a white supremacist gang called Soldiers of the Aryan Culture.

34-year-old Ricky Fackrell and 36-year-old Christopher Cramer were locked up in the U.S. Penitentiary in Beaumont, Texas. In March of 2014, they began conspiring to murder fellow inmate and Soldiers of the Aryan Culture gang member Leo Johns. On June 9, Cramer and Fackrell stabbed Johns to death at the federal prison.

The two gang members were indicted by a federal grand jury on March 3, 2016 and charged with murder and conspiracy to commit murder. They were both convicted by a federal jury of murder in the first degree on May 9, following a six-day trial. On Wednesday, after about eight hours of deliberation, a jury sentenced both men to death. The judge immediately sentenced the defendants accordingly.

“These defendants had a violent history, and when the murder happens in a prison, it is clear that the defendants are always going to be a danger,” said U.S. Attorney Joseph Brown. “This was an appropriate case for the death penalty and we will continue to seek that punishment in the worst cases.”