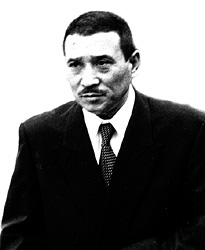 By Hollander (Poster to the Mobbed Up forum)
Posted on February 27, 2007
Copyright © www.gangstersinc.nl

In July 2005 Watanabe was effectively dismissed from his position and replaced by Kenichi Shinoda as the sixth-generation boss (kumicho) of the Yamaguchi-gumi.

Kenichi Shinoda, in yakuza circles known as Shinobu Tsukasa, was born January 25, 1942. He is a more aggressive and proactive personality than his predecessor. This reputation was first established in 1969 by his activities during a gang war between the expanding Hirota-gumi and local rivals belonging to the Dai Nippon Heiwa-Kai. culminating in his murder of a boss in the traditional way, using a katana. Tsukasa served 13 years in prison for this attack. In June 1984 Tsukasa founded the Kodo-kai based in Nagoya, he had been the underboss of the former Hirota-gumi. Under Tsukasa, the Kodo-kai was a successful gang, establishing branches in 18 prefectures-- including expansion into the Kanto region, traditionally not Yamaguchi turf. The Kodo-kai (with an estimated membership of 4000) is the second-largest Yamaguchi affiliate after the Yamaken-gumi.

Shinobu Tsukasa is the first Yamaguchi-gumi boss not to hail from the Kansai region. He also eschews the "supreme Godfather" image, after his appointment as boss, he insisted on taking the train to his induction ceremony instead of a chauffeured limousine.Tsukasa’s decision to act was spurred by the fact that he himself was facing prosecution for allowing his bodyguards to be armed. He had appealed all the way to the Supreme Court and a decision was coming soon. If he did not act before the verdict there was a strong chance that he would be unable to influence events. In November 2004, Tsukasa and his followers set things in motion when they announced that Watanabe was taking a period of leave from directly running the syndicate. The following May, Tsukasa was named as the new underboss (wakagashira). Two months later, Tsukasa and his supporters ordered Watanabe to go and he went. Unlike the mafia, where it is said the only way out is in a coffin, it is common for yakuza bosses to retire. Alongside Tsukasa’s promotion, there has been a raft of personnel changes at the top. The executive council has been reformed and strengthened with Tsukasa’s allies given key posts. The new underboss is Kiyoshi Takayama, formerly Tsukasa’s underboss and now the boss of the second generation Kodo-kai. This is the first time in the history of the Yamaguchi-gumi that the underboss has been chosen from the serving boss’s gang. In the eight years since the murder of powerful Takumi in 1997, there had been no replacement as underboss, and a lack of clear leadership. According to sources Takayama is one of the most intelligent yakuza-bosses ever.

In March 2001, Tsukasa had been found not guilty by the district court. The prosecutors then appealed to the Osaka High Court which overturned this ruling and sentenced him to six years imprisonment. Tsukasa in turn appealed to the Supreme Court which upheld the High Court’s verdict. On December 4, 2005, only four months after being named boss, Tsukasa began serving a six-year prison sentence. With the boss in prison, his underboss is running the syndicate on a day to day basis.

The Kobe-based Yamaguchi-gumi is expected to continue the expansion into Tokyo and Eastern Japan. According to both yakuza and police, this movement will inevitably create conflict between the Yamaguchi-gumi and the Kanto-Hatsukakai, a federation of Tokyo-based yakuza groups including the Inagawa-kai and the Sumiyoshi-kai. On a national level, many of the smaller yakuza gangs have links with the Yamaguchi-gumi for example Tsukasa has a brother relationship with Toshitsugu Zukoshi, boss of the fifth generation Aizu Kotetsu-kai.