You’re a coward and we should’ve killed you! Sincerely, Bonnie & Clyde – Couple’s letter to ex-pal up for auction 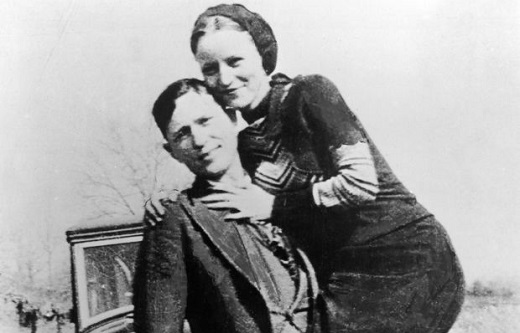 Bonnie Parker and Clyde Barrow have definitely made their mark on the world. After dying in a hail of gunfire their names were forever linked and would live on long after they were gone. So much in fact, that a letter they wrote in 1934 – the year of their death – to a former associate is going up for auction next month.

RR Auction is expecting the rare item to fetch at least $40,000. It knows about selling gangster stuff. A year ago, they sold off Tony Soprano’s Cadillac Escalade.

With all due respect to Tony Soprano, but Bonnie and Clyde are on another level of gangster stardom. The couple instantly fell head over heels in love when they met in 1930 and quickly found out they shared a taste for the life of an outlaw.

In the years that followed, they robbed banks and committed kidnappings throughout the United States. To top it off they didn’t hesitate to pull out their guns and shoot to kill. Their brazen, violent actions made headlines everywhere and turned the pair into household names.

But their acts had consequences and law enforcement stepped up its hunt for the duo. On May 23, 1934, Bonnie and Clyde drove along a rural road in Bienville Parish, Louisiana, when they were shot by a posse of four Texas officers and two Louisiana officers.

It was shoot first, ask questions later. The cops emptied their automatic rifles first, then grabbed their shotguns to fire at the car from close range with the pair seated inside. Both Bonnie and Clyde were hit by dozens of bullets, including several shots to the head, and died instantly.

The four-page letter was written on three lightly-lined sheets in the hand of Bonnie Parker and signed at the end by Clyde Barrow. It’s addressed to a hated ex-member of the ruthless Barrow gang named Raymond Hamilton, who was locked up at the Dallas County Jail and executed in 1935. Though the letter contains no date, it is known Hamilton arrived at the jail on April 30, 1934.

That would mean the letter was written just weeks before the gangster couple was killed.

Bonnie and Clyde had “a falling out with Hamilton after he sent a letter to his lawyer on April 7, 1934, insisting that he could not have taken part in ‘the killing in Commerce, Okla.,’ as he had not been with the gang since the Lancaster robbery; he also provided a hotel bill from Louisiana supporting his alibi,” RR Auction’s website reads.

“The Commerce killing was one in a series of brutal murders that swayed popular support away from Bonnie and Clyde as they became seen as bloodthirsty outlaws rather than folk heroes,” the statement on RR Auction continues. “The tide of opinion began to turn with the Eastham Prison Farm raid, but it was the Grapevine murders—which left two policemen dead—on April 1st that solidified their reputation. Bonnie and Clyde followed this up by killing a constable in Commerce, Oklahoma, five days later, galvanizing law enforcement against them and ultimately setting into motion the events that led to their demise.”

The full letter is below:

I’m very sorry to hear of your getting captured, but due to the fact that you offered no resistance sympathy is lacking. The most I can do is hope you miss the ‘chair.’ The purpose of this letter is to remind you of all the ‘dirty deals’ you have pulled. When I came to the farm after you I thought maybe the ‘joint’ had changed you from a boastful punk. However I learned too soon the mistake I had made. The first thing that aroused my suspicion was your suggestion of shooting Joe Palmer in the back while he was asleep. You soon learned how I felt about such ‘cat ideas.’ Since then I’ve found your reasons for wanting to do this was because Joe was on the farm with you and knew what kind of a guy you were. The next impression was when we got the road ‘blocked’ on us in the Ozarks and you were too ‘yellow’ to fight. You cowered in the floorboard, afraid of being shot.

Now that you’re in the Dallas jail you have a tested pal, W. D. Jones, you might get a few pointers from him on how to impress the people you were an innocent, or possibly forced companion of the ruthless Barrow gang. You might be as lucky as he was in making them believe I kept you handcuffed or tied.

When you wanted to get your Prostitute Sweetheart I thought it OK. But when you were so persistent about her going to town alone that idea wasn’t so ‘hot.’ I thought then and truthfully believe now that should she have gotten off without Bonnie she would have ‘spotted’ us all. She hails from a ‘rat’ family and you couldn’t expect better from her.

You exposed your ‘hole card’ when you stole the money from us on the Lancaster ‘job.’ That’s what I have my rear vision mirror for to watch suspicious people. When I demanded a ‘shake down’ you offered such strange excuses for having the money on you. I should have killed you then I would have saved myself much bother and money looking for you. For after you writing that letter saying you didn’t stoop so low as to rob filling stations I have done nothing but look for you. Should I have found you, you wouldn’t have had a chance to give up. You couldn’t stand the rift of the outlaw life. For one reason you were too yellow and knew you could never surrender with me and another reason you wanted to play ‘Big Shot,’ sleep in hotels and ride passenger trains. You weren’t intelligent enough to know that you couldn’t live like a king and stay out. I don’t claim to be too smart. I know that some day they will get me but it won’t be without resistance. You only carried your guns around to ‘show off’ or else kidnap women and children. I guess you find where your boastful long tongue has gotten you. Maybe you can talk yourself out of the ‘chair.’ Or maybe you can write a few more letters (try one to the governor) at least it will gain you some publicity.

When you started the rumor about Bonnie wanting a ‘cut’ of the loot you sure messed your self up. I have always taken care of Bonnie and never asked any thief to help me.

I hope this will serve the purpose of letting you know that you can never expect the least of sympathy or assistance from me. So long.

Signed at the conclusion, “Clyde Barrow.”