A $15 million drug ring led by members and associates of New York's Gambino, Bonanno, Genovese, and Colombo crime families was busted yesterday. Twenty-two people were charged as being part of a lucrative marijuana smuggling network that shipped the stuff from California to New York. Chief among them are 76-year-old Gambino capo Michael Paradiso, 60-year-old distributor Frank Parisi, and 51-year-old smuggler Richard Sinde.

The group brought in $350,000 worth’ of marijuana from California to New York every month for almost two years, prosecutors allege. The total amount of money made during this period was put at $15 million dollars. They also pulled in profits by selling oxycodone pills and running a gambling operation, according to the indictment.

“Whether the alleged offer was marijuana, pills, or a return on bets placed through an unlawful gambling operation, the defendants developed a comprehensive system of monetizing illicit activities and trade,” said District Attorney Cyrus R. Vance. “In this case, the alleged schemes generated millions of dollars in illegal revenue for the defendants, virtually none of which was reported, and likely all of which went straight into the defendants’ pockets. Profiting on unlawful conduct will not be tolerated in New York, and I thank our partners for their shared commitment to rooting out those who seek to make money through illegal practices.”

The marijuana shipments were coordinated by 52-year-old John Kelly and 51-year-old Richard Sinde, a reputed Bonanno crime family associate, who smuggled the product using either postal mail for individual packages weighing between 5-to-15 lbs., or packed into boxes and loaded into vans and other vehicles for transport, each holding between 100-to-150 lbs.

After Sinde was arrested on criminal charges, he was replaced by 33-year-old Lawrence Dentico, the grandson of Genovese crime family capo Lawrence Dentico, who lives in California and had no problems overseeing that side of the operation.

They got the weed from medical-grade marijuana farms in California, purchasing it from other local growers for export to New York. “They were overgrowing during their natural harvest season,” Inspector John Denesopolis of the NYPD's Criminal Enterprise Investigation Unit told the New York Daily News. “They also used hydroponics inside, and also they grew this marijuana inside of greenhouses. They were doing it in excess of the amount they were allowed.”

Frank Parisi, prosecutors claim, then distributed the drug via the same building that houses his family-owned Parisi Bakery on Mott Street in Manhattan’s Little Italy. When authorities raided the bakery to arrest Parisi, they discovered 20 pounds of marijuana. Besides the drug trafficking and tax charges, Parisi (photo above, middle) was also charged with running an illegal gambling website, which made the family over $1 million dollars. 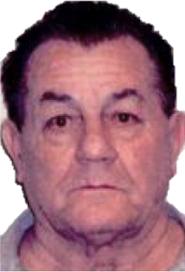 Other crew members were also involved in selling hundreds of prescription pills including oxycodone for at least $18,000, the indictment states. On two occasions they were caught selling pills to undercover detectives.

Longtime Gambino family captain Michael “Mickey Boy” Paradiso (right) was hit with just a conspiracy charge. The old timer was made a capo by John Gotti Sr. after he became the new boss. Paradiso earned a reputation as a prolific narcotics trafficker during his days – even butting heads with Anthony “Gaspipe” Casso, the notorious Lucchese family underboss, over splitting the proceeds of a drug deal both men were involved in.

He was released from prison in 2011 and is now looking at, perhaps, spending the final years of his life in a cell.