Mexico is a dangerous place. As drug cartels fight over lucrative territories, they litter the streets with dead bodies. And no one is immune to getting killed. Last year, a 37-year-old location manager working for the Netflix series Narcos was murdered while scouting for film spots.

It’s understandable then, that actor Frank Grillo got himself some protection while visiting Tepito, a barrio located in the Cuauhtémoc borough of Mexico City. Grillo, known for roles in movies like The Avengers, Captain America, The Grey, and The Purge, and the lead role in television series Kingdom, was in Tepito to showcase the neighborhood’s world class boxing gym for his Netflix documentary series Fightworld.

“A couple of times I was worried,” he tells comedians Bryan Callen and Brendan Schaub on The Fighter and the Kid podcast. “And I was warned so it made me a bit more anxious. If you watch the Mexico episode. After we went to Jorge Vera’s gym. I’m with a little old Mexican guy who is the leader of the most dangerous drug cartel in Tepito. He became my guardian. Him and his son. Wherever I went in Tepito, he said: ‘Right now wherever you are in Tepito there are 400 eyes on you, right now, with guns.’ Everything is run by them. 99 percent of the people in Tepito are beautiful, hardworking, amazing human beings, friendly and gracious. But, he said, ‘if I step away from you, you are in trouble, your whole crew is in trouble.’ And when I was there, I felt it.”

It’s unclear, to Gangsters Inc., who Grillo is referring to exactly. He filmed the episode in September of 2017 and shared the following photo on his Instagram with the text: “#TapitoMexico. The home of some of the best boxers in the world. These ain't them. These are the guys who run the place. #gangster #fighterlife #jorgevera” 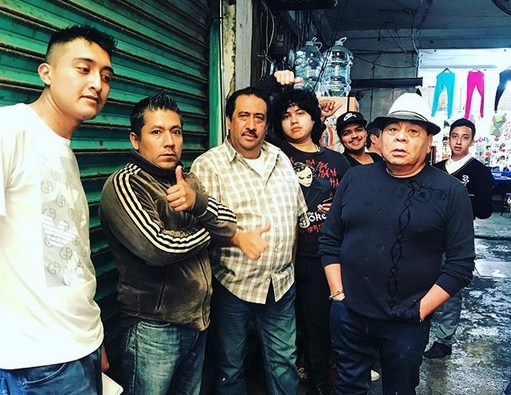 At that time, Francisco Javier Hernández Gómez was still the supreme leader of one of Tepito’s most powerful drug gangs, called La Unión de Tepito. He led the gang from the 1990s up until his murder in October of 2017. This summer, Mexico authorities arrested two key figures in the Tepito underworld who were allegedly behind Francisco Javier Hernández Gómez’s execution.

Both men were alleged leaders in La Unión de Tepito. In August, they arrested Roberto Moyado Esparza or Roberto Fabián Miranda, known by the nickname “El Betito”, who was allegedly involved in a number of executions and beheadings. According to Mexico News Daily, he rose to the top of the group after “a series of internal quarrels and the assassination of former leader Francisco Javier Hernández Gómez.”

In the end, Grillo remained safe and his series Fightworld can be seen on Netflix right now. Part of that, he says, had to do with his reason for being there. “So I had thirty guys around me at any time. There were a lot of people looking out for us. You know what, I don’t care if they’re on the wrong side of the law, everyone respects fighters. So if you’re there to show the world what’s good about Tepito and Mexican boxing and brag about the resident trainer from Tepito, it makes them feel good.”